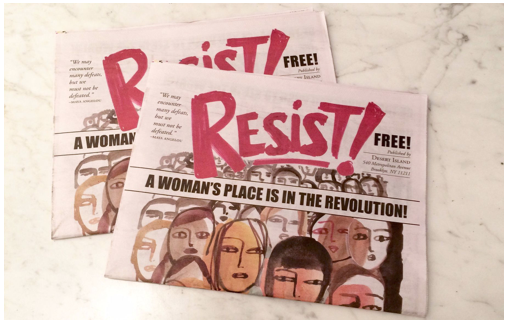 BCK FILE--At last week’s LA Women’s March, I read one woman’s sign, thanking Trump for turning her into an activist. I’ve been politically obsessed since childhood. I have specific memories of watching the Watergate hearings and was canvassing for local and presidential candidates long before I was old enough to vote.

But whether you’re new to the game, egged on by what’s at stake, or you’ve been fighting for a years, resistance and change belong to all of us.

I’ve been fortunate to have met so many activists since I started to write for CityWatch, people who were sparked by one issue or another and who are making a difference in Los Angeles and in their neighborhoods.

I’ve sat in living rooms with people who are infuriated at the coziness and cash exchanges between developers and city council members that have changed the face of neighborhoods, tearing down properties like a childhood home of Norma Jean Baker aka Marilyn Monroe to make way for luxury condo buildings that drive up rental and housing costs, increasing traffic and ruining the quality of life.

These people are relentless in their dedication to exposing corruption and protecting neighborhoods throughout the city.

I’ve interviewed stakeholders in numerous resistance efforts who are dedicated to protecting rights for everyone, whether promoting the passage of the Equal Rights Amendment, maintaining equality and fighting violence against LGBTQ people or supporting science and efforts to fight climate change.

People arrive at issues through various means; sometimes, related to their professions or passions; sometimes, their activism is incited by a singular event such as unpermitted teardown of a neighboring house or squatters imposing danger in a neighborhood.

Where do we go from here? Showing up at marches or events is one way to show solidarity but there’s even more we can do to make a difference, from fighting for tenants’ rights or feeding the homeless to getting involved in your neighborhood council and encouraging kids to engage as part of the future generation. And of course, showing up at the polls.

Support newspapers and pay for the paywall when you’re maxed out your articles per month. The president and his followers continuously bash the media as “fake news” when he’s not painted in a glowing light. Demonstrating that we value and trust the press is one way to right this dangerous movement.

At times, the issues at stake seem overwhelming. How many texts and emails can we send to our representatives? How many phone calls can we make? Just following the news can be anxiety-provoking but we’ve got to be in this for the long haul.

We all still have responsibilities aside from fighting for what’s at stake and it’s important to keep things in perspective. Choose an issue or two that resonate with you and stay focused. Give yourself time to step away, whether spending time at the gym, with family or friends, playing with your pet.
We need every single person who is willing to fight for what’s right. We are so fortunate that the Founding Fathers offered protections of freedom of press, speech, and assembly, and that we have the right to vote.
These are all rights we cannot take lightly but must protect every day.
Silence is complicit.

We’ll continue to follow activist and resistance efforts across the city, as well as national efforts that impact Los Angeles and California. We want to hear from you, too. What are your issues? What are you doing to support those issues? Together, we can inspire and motivate each other to create change.

Those efforts start close to home and like a stone tossed in a pond, reverberate throughout the country and the world.