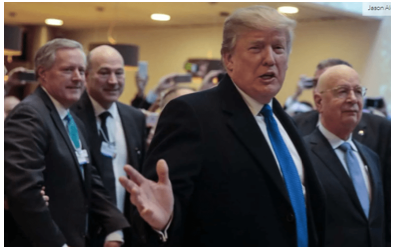 RESISTANCE WATCH--Shortly following a relatively tempered speech (by his standards) at the World Economic Forum in Davos, Switzerland on Friday, President Donald Trump veered from the script during a brief question-and-answer session, launching into a tirade against the "vicious" and "fake" press—a rant for which he was promptly booed by some attendees.

"I've always seemed to get, for whatever reason, a disproportionate amount of press," Trump said of his business career. "It wasn't until I became a politician that I realized how nasty, how mean, how vicious, and how fake the press can be—as the cameras start going off in the back."

According to one reporter in attendance, it was a group of foreign journalists that kicked off the booing. Watch

(Jake Johnson writes for Common Dreams  … where this report originated.)