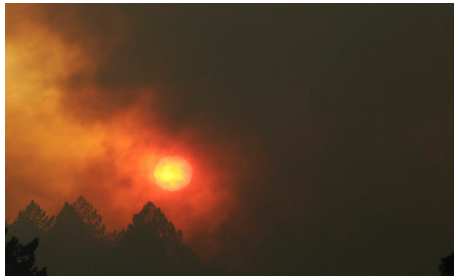 FEDERAL AID POLITICS--As thousands of Californians struggle to recover from October’s devastating wildfires, the White House has left California’s appeal for relief funding out of its $44 billion disaster aid request to Congress, meaning the state may not receive any federal aid for them. (Photo above: Smoke obscures the sun in Santa Rosa, Calif., during the October wildfires. )

“It’s appalling the White House is choosing to ignore the victims of California’s wildfires,” California Sens. Dianne Feinstein and Kamala D. Harris said in a joint statement Friday. “The latest disaster supplemental request is a completely inadequate response to all of the recent natural disasters, but it’s particularly egregious that no money was included to help Californians rebuild.”

The senators went on to say they would continue to push for funding for those affected by the California wine country fires. “The president needs to remember that he serves all Americans and has a responsibility to help the citizens of California, as well as those of Puerto Rico, the U.S. Virgin Islands, Florida and Texas,” their statement says.

The request, President Donald Trump’s third since hurricanes Harvey, Irma and Maria slammed the Gulf Coast and Caribbean, would bring the total appropriated for disaster relief this fall close to $100 billion — and that’s before most of the money to rebuild Puerto Rico’s devastated housing stock and electric grid is added in. The new installment would add $24 billion to the government’s chief disaster account and establish a new $12 billion grant program for flood risk mitigation projects. Smaller amounts would go to small business loans and to aid farmers suffering crop losses. The request followed lobbying by Texas Gov. Greg Abbott and Puerto Rico Gov. Ricardo Rossello, who pressed the White House for far more. There are sure to be attempts to add to the measure as it advances through the House and Senate. “This request does not come close to what local officials say is needed,” said New York Rep. Nita Lowey, top Democrat on the House Appropriations Committee.

White House spokeswoman Sarah Huckabee Sanders said in a press briefing Friday that the package was sufficient. “I don’t think $44 billion is a low amount, and my guess is if you asked any average citizen across this country, they wouldn’t feel that it’s low, either.” She added that Texas “should step up” and use state funds toward the hurricane damage.

California Reps. Mike Thompson and Jared Huffman also released a joint statement condemning the Trump administration’s decision to ignore California’s request for aid: “This is a new low for this Administration. Either they have forgotten about the thousands of American citizens who’ve lost everything in the California fires, or they just don’t care. … This is outrageous, unacceptable, and a dereliction of the Administration’s duty to help the people of California.”

​(Emily Wells is an Ear to the Ground blogger at Truthdig … where this perspective was first posted.)