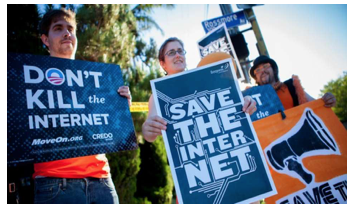 RESISTANCE WATCH--Defenders of the open internet are issuing urgent calls to action as news reports indicate that Federal Communications Commission (FCC) chair Ajit Pai has set his sights on a December 14 vote to kill net neutrality and "destroy the internet as we know it."

"In less than a month, and in defiance of the tens of millions of Americans who have spoken out for the free and open internet, Ajit Pai will move to kill net neutrality." Craig Aaron, president of Free Press, said in a statement. "It's time to raise hell."

The FCC's planned vote will come on the heels of a lengthy, record-breaking comment period during which millions of submissions were filed. One analysis estimated that 95 percent of organic comments came down on the side of net neutrality.

While the details and scope of Pai's attack on net neutrality—just one component of his far-reaching deregulatory agenda—will not be fully unveiled until next week, the agency is at the very least expected to rescind the classification of the internet as a public utility under Title II of the Communications Act, which gives the FCC the power to bar internet service providers (ISPs) from blocking or throttling online content.

"Pai's intent is clear: to destroy the internet as we know it and give even more gatekeeper power to a few huge companies like AT&T, Comcast, and Verizon."
—Craig Aaron, Free PressPai voted against this classification in 2015, and now, with the FCC at full staff and controlled by Republicans, he will have his opportunity to reverse it.

"Pai's intent is clear: to destroy the internet as we know it and give even more gatekeeper power to a few huge companies like AT&T, Comcast, and Verizon," Aaron concluded. "Any honest look at the facts proves that the Title II rules are working well, investment is up across the board, and the only uncertainty or confusion is based on what's coming out of Pai's mouth. If the FCC passes Pai's plan in December, it will face enormous challenges in court—and in the streets as well."

As Common Dreams reported, a survey published in September found that 57 percent of Americans "support the current net neutrality regulations that ban ISPs from blocking or discriminating against lawful content on the internet." Only 16 percent, by contrast, expressed support for Pai's push to destroy net neutrality.

(Jake Johnson writes for Common Dreams  … where this Resistance piece was first posted.)