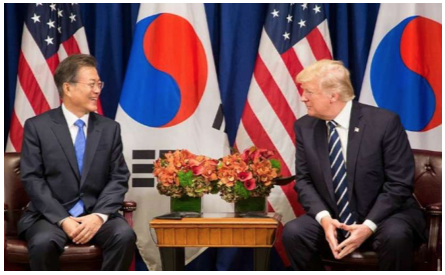 The protests are expected to draw thousands, and will kick off with a "No Trump, No War People's Rally" outside the U.S. Embassy in South Korea's capitol city on Saturday, Nov. 4, ahead of Trump's arrival on Nov. 7 for a two-day visit. The coalition has also planned a candlelight vigil at Gwanghwamun Square for Nov. 7 and a protest outside the National Assembly building, during Trump's address to parliament on Nov. 8.

In a statement announcing details about the president's trip to Asia, the White House said, "The President's engagements will strengthen the international resolve to confront the North Korean threat and ensure the complete, verifiable, and irreversible denuclearization of the Korean Peninsula."

However, Trump's preference for "fire and fury" over diplomacy, and his continued threats to "totally destroy North Korea," have escalated nuclear tensions and raised alarm, at home and abroad—particularly among North Korean civilians and their neighbors to the south.

"Who can possibly welcome a foreign leader who talks about the possibility of a war on their land?" the civic groups said during a press briefing, according to the Seoul-based Korea Herald. "We should take the path of peace, not war. We cannot help but protect peace on our land and our livelihood for ourselves."

The protesters plan to "call on the U.S. to stop threatening to start a war, putting pressure on the North, and forcing the South to buy American-made weapons," the Korea Herald reports, noting:

They also want the withdrawal of the US Terminal High-Altitude Area Defense anti-missile system, which they say caters only to U.S. interests while widening the divide between South Korea and China. China, which believes the system's radar could be used to spy on its territory, has taken what appear to be retaliatory actions against Korea, such as restrictions on Korean firms' businesses in China.

They also want the abolishment of the Korea-U.S. bilateral trade deal, which the two countries have recently begun to renegotiate at Trump's urging, saying the trade deal only benefits the U.S. and disadvantages Korea, especially local farmers.

North Korean newspaper and television reports, according to Deutsche Welle, have highlighted the planned protests against "war maniac Trump's South Korea visit" and noted that the protesters have "denounced war lunatic Trump's hysteria for a nuclear war against the DPRK [Democratic People's Republic of Korea, or North Korea]."

The president and First Lady Melania Trump will depart the U.S. on Friday, Nov. 3 and return Nov. 14. In addition to South Korea, they will travel to Japan, China, Vietnam, the Philippines, and Hawaii.

In an unusual move for a sitting U.S. president, Trump reportedly will not visit the Demilitarized Zone, or the DMZ, the border that separates North and South Korea. Last month, amid rising tensions, reports of a possible presidential visit to the DMZ sparked concern among the international community due to Trump's tendency to lash out at Kim Jong-un.

(Jessica Corbett writes for Common Dreams  … where this report originated.)