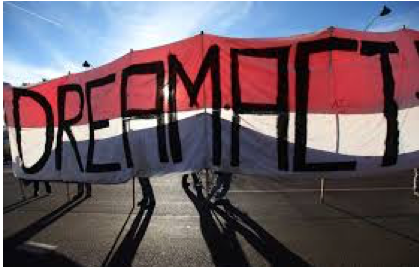 RESISTANCE WATCH--By repealing DACA – Deferred Action For Childhood Arrivals – Trump has endangered both these young immigrants and the economic security of America.

"This is just the latest effort by Trump to play to his base and divide us, but we must not allow that."

In 2012, the Obama  administration created DACA as a temporary way to address the needs of young people who came to America as infants or toddlers, and know no other country.

To apply and qualify for DACA, these young people had to risk entering the system by giving their identifying information. Once approved, they were granted two years of “deferred action” on deportation, with the promise that they could reapply every two years indefinitely.

This allowed “dreamers” to go to college, get a job, and pay taxes without fear of deportation. DACA was never perfect, but for 800,000 immigrant youth it meant freedom from fear and an opportunity to fully contribute to the country they were raised in. 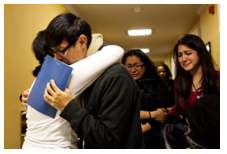 But now these young people are threatened with deportation.

For no reason. These young people are not taking jobs away from native-born Americans.  Even the conservative Cato Institute has said that the economic cost of cancelling DACA would be $200 billion over ten years.  And that’s just direct costs. The Center for American Progress estimates that if we lost these young workers the U.S. gross domestic product would shrink by $433 billion over the next decade.

The moral case is even more compelling than the economic one.

These kids grew up in America. To enter the DACA program they already had to step forward and show that they were contributing  to their communities and then prove it again every two years to stay in the program. It is immoral to now put them in the crosshairs of deportation.

This is just the latest effort by Trump to play to his base and divide us, but we must not allow that. Americans of all races and creeds must push congress to pass the Dream Act, and allow these young people to become American citizens – without the Act being a bargaining chip for more border security or anything else.

These DACA young people are our neighbors, our colleagues, and our classmates. They represent the the best of the dream that my parents and most of our ancestors had when they came to America:  To make a better life for themselves, and for their kids.  Trump’s attempt to divide us and fuel our differences along racial and ethnic lines is an attack on the America I believe in, and we must not let it stand.

That’s why the DACA fight is my fight, and why I stand with the dreamers – and I hope you will too.

(Robert Reich is Chancellor's Professor of Public Policy, University of California at Berkeley and the author of Aftershock: The Next Economy and America's Future, now in bookstores. This post originally appeared at RobertReich.org.)