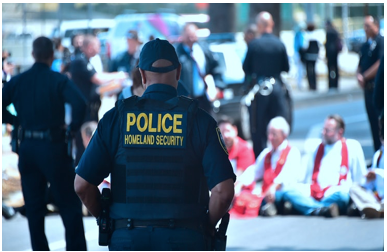 Senate Bill 54, which takes effect in January, has been blasted as “unconscionable” by U.S. Atty. Gen. Jeff Sessions, becoming the focus of a national debate over how far states and cities can go to prevent their officers from enforcing federal immigration laws. Supporters have hailed it as part of a broader effort by majority Democrats in the California Legislature to shield more than 2.3 million immigrants living illegally in the state.

In response to the bill, U.S. Immigration and Customs Enforcement (ICE) has threatened to step up immigration raids in California. In a statement about California’s decision, ICE acting Director Thomas Homan said Friday that it “will undermine public safety and hinder ICE from performing its federally mandated mission.” Homan added, “ICE will have no choice but to conduct at-large arrests in local neighborhoods and at worksites.”

California’s “sanctuary statehood” does not prevent ICE from enforcing immigration law in the jurisdictions it covers. Gov. Brown wrote: “In enshrining these new protections, it is important to note what the bill does not do. This bill does not prevent or prohibit Immigration and Customs Enforcement or the Department of Homeland Security from doing their own work in any way.”

SB54 will negatively impact ICE operations in California by nearly eliminating all cooperation and communication with our law enforcement partners in the state, voiding the delegated authority that the Orange County Sheriff’s Office has under the 287g program, and prohibiting local law enforcement from contracting with the federal government to house detainees.

Many who advocate for immigrants feel California’s declaration of sanctuary is necessary to push back against federal authorities overstepping their bounds. “The California Values Act is a stinging rebuke to the nativism of President Trump and his drive to deport millions,” said Frank Sharry, executive director of America’s Voice, a group that works for immigration reform.

“Trump and Sessions are determined to bully state and local jurisdictions into turning immigrants over to ICE even though it diverts law enforcement from protecting the public,” Sharry said. “With this and other steps, California is declaring that it wants no part in aiding and abetting Trump’s deportation force.”

​(Emily Wells is an Ear to the Ground blogger at Truthdig  … where this report was first posted.)