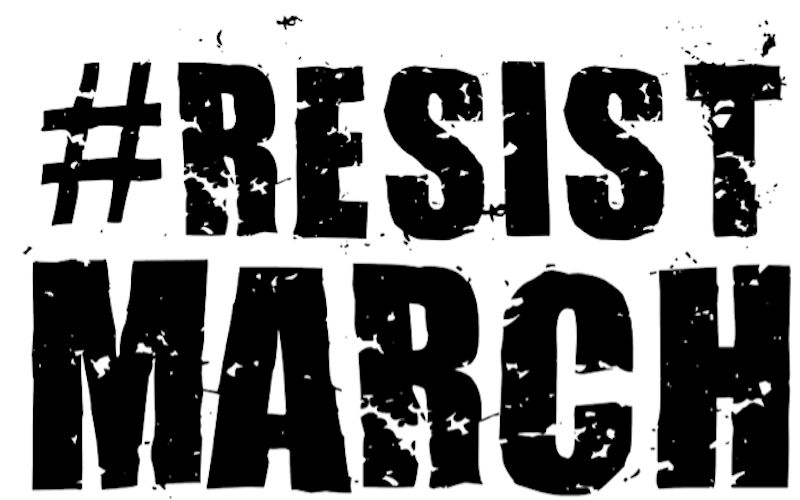 RESISTANCE--“I never thought I’d be fighting these same battles -- again.” That credo has become the rallying cry for those who raised signs and banners for the movements of the sixties and seventies. Now, those who were young children or not yet born join the earlier activists on the Trump-inspired front line. The following three equality events and marches are on the LA calendar within the next few months.

Over 50,000 are expected to participate in the March for Science starting at Pershing Square, which has become Ground Zero for such activity in our city. LA’s March is one of over 300 independent satellite marches for the national March for Science in Washington, DC happening the same day. The LA March will also feature a science and technology expo.

According to the umbrella website, the mission of The March for Science is to “champion robustly funded and publicly communicated science as a pillar of human freedom and prosperity. We unite as a diverse nonpartisan group to call for science that upholds the common good and for political leaders and policymakers to enact evidence-based policies in the public interest.”

The Transgender Rights Movement will be holding the Transgender March for Equality in Downtown LA. The march, to be held from 11 am to 3 pm, is being held to address the rights of the transgender community. The group’s Facebook event page reads: We understand that our community spans all racial classifications, religions, cultures, ages, countries, political representations, and every other demographic group in the country and in the world. We ask for your solidarity and support in marching or us for all people.”

The Feminist Majority will be conducting rallies and fundraising walks to support women’s equality, including the Equal Rights Amendment. The group’s First Annual Los Angeles Rally and Walk for Equality will be held at Pan Pacific Park. Visit the website to sign up for the walk.

The Los Angeles March supports the ERA, an amendment that would secure women’s equality in the U.S. Constitution. The Equal Rights Amendment reads: Equality of rights under the law shall not be denied or abridged by the United States or by any state on account of sex.”

Event organizers ask supporters to make a donation to the Rally & Walk for EQUALITY to create or join a team. Instructions and information about the event are available on the site.

On June 18, 1970, Christopher Street West organized what was the very first permitted parade in Greater Los Angeles to advocate for gay rights, commemorating the first anniversary of New York’s Stonewall Rebellion. For the past 43 years, LA Pride Parade and Festival has been a fixture in West Hollywood. On June 11, 2017, however, one of the world’s largest pride parades will be replaced with #ResistMarch, announce Christopher Street West organizers.

“LA Pride was founded upon the spirit of activism -- and today, continues in the footsteps of its founders,” reads the LA Pride website. A post on the website explains the event’s 2017 transformation.

Christopher Street West (CSW), the non-profit organization responsible for producing the annual LA Pride Parade and Festival in West Hollywood, has taken its New Year’s resolutions seriously. Today, the CSW Board of Directors is excited to announce a number of important changes to LA Pride in 2017. ...Given the current political climate where divisiveness and discrimination continue to be part of mainstream dialogue, CSW is determined to make the LA Pride brand a unifying force for the LGBTQ+ community and its allies across all of Los Angeles. To accomplish this goal, the organization is introducing several community-focused initiatives to continue LA Pride’s long-standing history as a voice of and for the entire LGBTQ+ community. - LA Pride website.