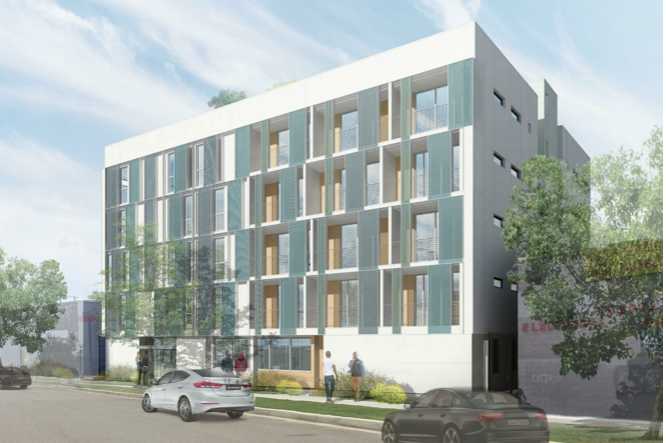 VOICES-La Brea Willoughby Coalition continues its fight to protect the quality of life, as well as the character and scale of the La Brea-Willoughby neighborhood in Hollywood by focusing on clarifying and enforcing all zoning laws.

The coalition’s latest fight concerns the project located at 843 North La Brea Blvd. (See architectural rendering above.) The LA City’s December 17, 2019 approval of the project prompted the coalition to file its appeal on January 2, 2020.

The coalition is fully supportive of the project’s efforts to provide supportive housing for low-income or homeless Angelenos. Yet, the City is rushing to approve this project in an attempt to combat the housing crisis in Los Angeles. In the City’s haste to approve the project, valuable input from the surrounding community has been blocked and the project has not been properly vetted. This has resulted in the approval of an over-height project that is being permitted to install roof decks, all without any analysis under the city’s planning and zoning laws.

Roof decks tend to be a nuisance to neighbors and the approval of decks for this particular project did not comply with the city’s open space laws. That the project and its roof decks were approved without input from the community only compounds this error. The La Brea Willoughby neighborhood was blocked from providing input on this project because, per the Transit Oriented Community Guidelines, only adjacent property owners are permitted to do so. This is an affront to the community’s rights to participate in the public planning process.

The coalition even reached out to Ecumenical Association for Housing, the project applicant, to discuss how the project could be beneficial for everyone. The association ignored the coalition’s inquiry and did not bother to respond.

Please contact us to find out more on how you can get involved in the fight to preserve these important rights.

(Lucille Saunders is the La Brea Willoughby Coalition president and a citywide community activist. She welcomes all comments and questions at labreacoalition@gmail.com. Additional contact: Sabrina Venskus, venskus@lawsv.com) Edited for CityWatch by Linda Abrams.