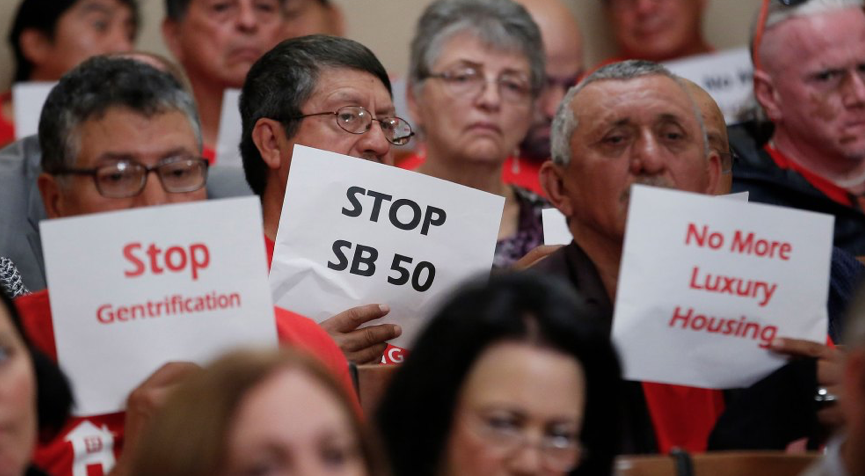 But Wiener just announced plans to revive SB 50 with amendments that he says will give cities more flexibility in meeting the bill’s requirements.

The new version of the bill would allow cities and counties to come up with their own plans to increase growth around transit and jobs as long as they boost density to the level required under SB 50. The provision allows for fourplexes on single-family parcels without exception.

SB 50 would allow multifamily housing projects that are within a quarter mile of a train station to bypass city parking requirements, density limits or height limits of less than 55 feet.

If the housing project is more than a quarter mile but less than a half mile from the train station, a height limit of 45 feet or less could not be imposed.

It would also apply to housing developments within a quarter mile of a bus stop on a “high-quality” bus route or in so-called “job-rich areas.”

In those zones, a city couldn’t apply density limits to multi-family housing projects or require more than half a parking space per unit.

SB 50 Stopped Last Year, But It's Back

Last year, Sen. Anthony Portantino (D-La Cañada Flintridge) stopped SB 50 by shelving it without a vote in the Appropriations Committee, which he chairs. Portantino said he hadn’t seen Wiener’s changes to the bill, but said he remained concerned that the bill would prioritize market-rate housing instead of low-income development and do so without ensuring that new streets, sidewalks and other new infrastructure would come alongside the homebuilding.‌

SB 50 would allow up to a 20-unit building without a single affordable unit provided.

Here are the housing requirements of SB 50 and why Sen Portantino’s concerns are completely justified.

If the project has 10 or fewer units, no affordability contribution is required.

If the project has more than 20 residential units, the development proponent shall do either of the following:

Make a comparable affordability contribution toward housing offsite that is affordable to lower income households.

Include units on the site of the project that are affordable to extremely low income, very low income, or lower income households:

SB 50 is Not the Answer. Your Action is Needed Now!

Tell them to vote NO on SB 50 to prevent gentrification and tenant displacement. Tell them we do need more housing, but it must be affordable housing.

(Larry Gross is the Executive Director, Coalition for Economic Survival)