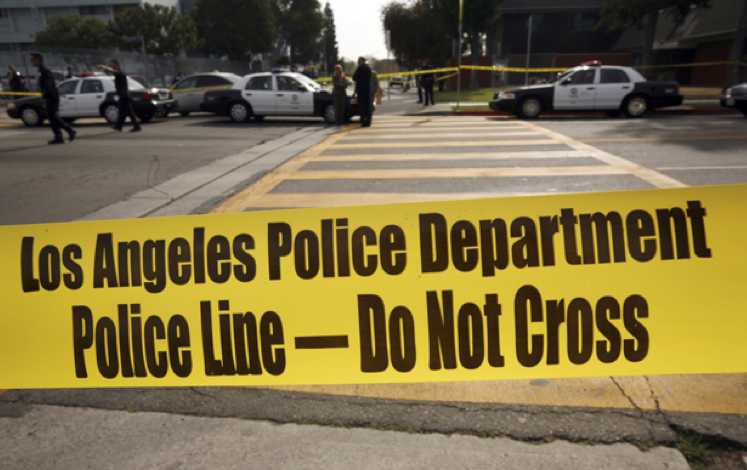 ALPERN AT LARGE-Lemme get this straight: crime rates are. . .down? So why is everyone I know, you know, and we all know increasingly scared?

This should be a time of decreased tensions, and greater joy, in all of our lives, and NOT the other way around. It's Thanksgiving -- we should rejoice and relax.

So why are so many people of all colors, of all socioeconomic backgrounds, and all political affiliations thinking about or leaving the City of the Angels?

Try using the more accurate term Mean Streets, when everything from safety to parking to survival of our small businesses is up for grabs, and tensions are higher than ever.

Lots of articles were out there this year about how Mayor Eric Garcetti and LAPD Police Chief Michel Moore are reporting how crime is down.

But crime rates are based on REPORTED crimes, not unreported crimes.

And as Angelenos are either leaving, beefing up their own home/apartment/condo security systems, or arming up (amazed and relieved that more violence hasn't been the case so far), it's all being done with the understanding that the LAPD increasingly chooses more and more crimes to NOT respond to.

Either they're overwhelmed, they're being pressured to not respond to "non-violent homeless crimes", and/or they're pissed off that the voters were stupid enough to vote in Props. 47 and 57, the LAPD is standing down.

(Yes, the voters really WERE pretty damned stupid, or at least sold a horrible bill of goods.)

So the residents of Los Angeles and other major cities are learning the hard way that "non-violent offenders" do lots of property crimes, and may at times truly become threatening or even violent--particularly when the previously-reported felonies are now called misdemeanors. . .

...and particularly when the LAPD and other law enforcement agencies are not allowed to arrest and seriously prosecute and jail repeat offenders for theft or property damage below a certain level of measured financial value.

So the LAPD is now standing back and NOT responding appropriately, and the citizenry also is learning that they can't rely on or even bother to call the LAPD when most crimes are reported.

So perhaps we're NOT crazy, just disillusioned and disheartened. Perhaps we're seeing the crime rates in our city go UP after all!

And it's now considered a waste of time by an increasing number of Angelenos to even bother the LAPD when most crimes, "non-violent" or otherwise, occur. . .even if the LAPD once responded to those very same crimes.

A potential bit of good news does exist, however.

Maybe the LAPD and the citizenry (those who haven't bolted the Gilded State. . .er. . .Golden State) actually does have an answer.

A measure has just qualified for the 2020 ballot to roll back some of the "reforms" sold to voters in the forms of Propositions 47 and 57, and despite the loud alarms of law enforcement who were ignored by many of these same voters.

And now the voters and the LAPD have a chance to now restore the faith and ties they once shared to ensure that the rule of law, and civilized behavior, would be the norm in California and its cities.

We have the chance to "reform the reform" we so previously enacted, and perhaps let the Sacramento and Downtown Los Angeles elites know that even if THEY don't get it, WE DO GET IT.

Because even if the LAPD is standing down, and even if crime reporting is going down, actual crimes are going UP while our quality of life and safety is going DOWN.

Because no matter how many lies and false logics can be rammed down our throats, we're NOT crazy.

And because we're increasingly suffering and at the mercy of those elites and criminal elements ruling the halls of power and the streets who really ARE crazy.

(CityWatch Columnist, Kenneth S. Alpern, M.D, is a dermatologist who has served in clinics in Los Angeles, Orange, and Riverside Counties, and is a proud husband and father to two cherished children and a wonderful wife. He was (termed out) also a Westside Village Zone Director and Board member of the Mar Vista Community Council (MVCC), previously co-chaired its Outreach Committee, and currently is Co-Chair of its MVCC Transportation/Infrastructure Committee and Vice-Chair of its Planning Committee. He was co-chair of the CD11 Transportation Advisory Committee and chaired the nonprofit Transit Coalition and can be reached at Ken.Alpern@MarVista.org. He also co-chairs the grassroots Friends of the Green Line at www.fogl.us. The views expressed in this article are solely those of Dr. Alpern.) Prepped for CityWatch by Linda Abrams.