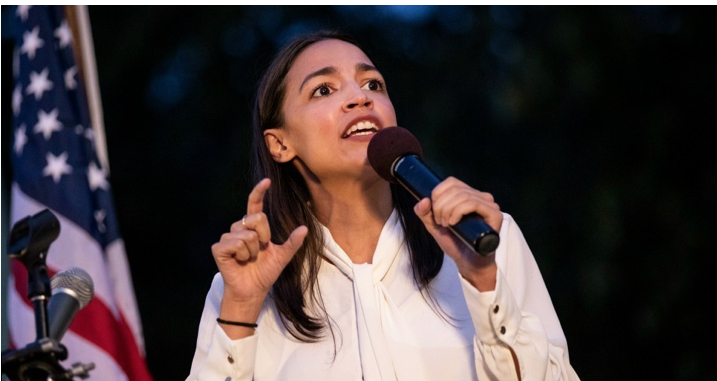 EDUCATION POLITICS--Rep. Alexandria Ocasio-Cortez spoke with her constituents in The Bronx on Sunday about a public housing plan under the Green New Deal.

Rep. Alexandria Ocasio-Cortez won applause and cheers from her constituents on Sunday at a town hall in the Bronx where she expressed deep frustration with the routine dismissal of investment in public goods as "free stuff."

"I never want to hear the term 'free stuff' ever again," Ocasio-Cortez told the audience.

The progressive first-term Democrat explained her vision for newly proposed legislation—the Green New Deal for Public Housing—for a $180 billion investment in upgraded public housing that would prioritize communities on the frontlines of the climate crisis, retrofit units with energy-efficient insulation and appliances, and create 250,000 jobs. The bill is cosponsored in the Senate by Sens. Bernie Sanders (I-Vt.), Elizabeth Warren (D-Mass.), and Jeff Merkley (D-Ore.).

Like public roads, schools, and libraries, Ocasio-Cortez said, public housing should be recognized as a public good funded by taxpayers, particularly the wealthiest people and corporations.

"It is possible and it's not that we deserve it because it's a handout," the congresswoman said. "People like to say, 'Oh, this is about free stuff.' This is not about free stuff... These are public goods."

Ocasio-Cortez won applause from members of the audience for her plan, including one who shouted of housing, "It is a human right!"

On social media Monday Ocasio-Cortez said public services for the use of all people "are worth investing in, protecting, and advancing for all society and future generations."

At Sunday's town hall, Ocasio-Cortez denounced the term "free stuff" to dismiss progressive proposals for benefits already available to people in many developed countries as a "neoliberal" talking point.

"I'm already hearing some of these neoliberal folks who are trying to flip the script on us and say...'Oh, I don't want to pay for a millionaire's kids to go to college,'" she said.