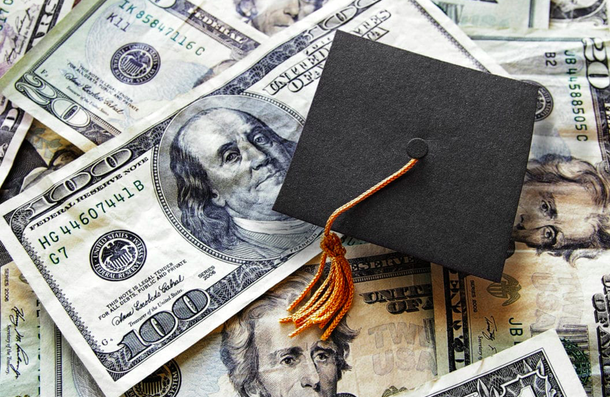 ALPERN AT LARGE--As with racism, the national debt, the cost of health care, rent and living expenses, and illegal immigration, there's a long-overdue discussion to be had...

but we're having two or more sides talking at each other but not with each other. Which is a pity, because a compromise might be had to please most of the adults in the room, and to bring the country together.

But that compromise, and that conversation, appears nowhere near to be reached.

Oh, I'm sure that the "forgive college debt" and "they made their bed, let them lie in it" crowds have a few good points, but there's a few great reasons why young adults, still wet behind the ears in the learnings of life (more than they know) are choosing socialism. Some of that is misinformation, and some of that is pandering for their votes, and ...

... and some of that is desperation.

(And how many of us paid for the Great Recession, which turned into the Second Great Depression, from 2007 that lasted a better part of a decade, and which started from incredibly lousy decisions of wannabe-but-broke homeowners and banks who enabled them?)

Sooner or later, the bill will become due to pay for college debt. That sort of bill always comes due.

1) So long as the cottage industry of the universities of this nation still keeps getting propped up by easily influenced young women and men, and by their parents, who presume that college is for everybody, the right conversation to fix the problem won't happen.

2) So long as alumni pour their hard-earned funds, and so long as the states and federal government pour billions into colleges who (at best) provide marginal education, and do NOT teach critical thinking, writing skills, and both a solid foundation in the sciences and liberal arts to their students, the right conversation to fix the problem won't happen.

3) So long as a lack of data exists for necessary job skills, and the likelihood of a given salary based on a given major, the right conversation to fix the problem won't happen.

4) So long as the benefits of vocational training in both high school and junior/community colleges aren't being more promoted, the right conversation to fix the problem won't happen.

5) So long as the mechanisms of "college loan forgiveness" aren't defined, such as either military service or tough years of EARNING that forgiveness on the backs of the taxpayers (especially those who DID pay back their debt, or who did NOT get into unresolvable amounts of debt), the right conversation to fix the problem won't happen.

6) So long as best practices and recommended family income/debt ratios aren't taught and promoted, the right conversation to fix the problem won't happen.

7) Most importantly, so long as universities pump out students with insufficient job skills and recommended majors (double majors for some students) to achieve financial independence and employability, the right conversation to fix the problem won't happen.

Students with high amounts of debt aren't all grifters and aren't all victims. Some are almost criminally foolish in their past and present mistakes, and others have been played as young adults by swindling and self-interested university con artists.

As the former chief operating officer of the Department of Education's Federal Student Aid program stated as he resigned (LINK: https://finance.yahoo.com/news/a-wayne-johnson-republican-student-loan-official-who-quit-190422211.html), the current system is "an abomination".

There IS an answer. It WILL require tough work for those seeking a way out of debt enslavement. There WILL be a need to have a few "come to Jesus" talks and hard limitations to overcharging and underperforming universities, and probably an alumni boycott on donations to certain (if not virtually all) universities to get them to derive more sustainable and cost-effective budgets is in order, too.

But until then, the real discussion, and any real answers to our burgeoning problem, will only get horribly, dangerously worse.