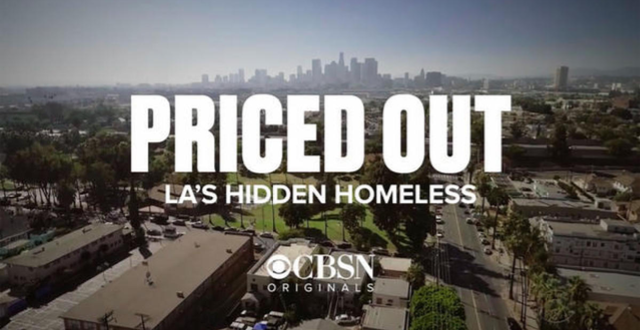 PLANNING WATCH-To solve a worsening problem, like homelessness, you have to ask the right questions if you intend to come up with the right answers.

What most Angelenos know about homelessness comes from what they see immediately around them, such as homeless encampments and homeless people, some with shopping carts, often disheveled and suffering from mental illness.

A smaller percentage of people read the Los Angeles Times (LAT), especially the columns by Steve Lopez, one of LA’s most appreciated journalists. His columns expand how many Angelenos directly experience life in this vast metropolis, including the homeless, who he frequently interviews.

This is the world that the LA Times tapped into with its series of six front-page articles about homelessness, including three reports on a survey that the LAT conducted to measure opinions about homelessness. Combined with three Steve Lopez columns, and an editorial, it is clear that the paper is devoting its considerable resources to covering selected aspects of the housing crisis in Los Angeles.

But, until you ask the right questions, you cannot come up with the right answers, and the LA Times news coverage and public opinion surveys steer readers away from the underlying causes of homelessness. Their survey, and their front-page stories about the survey, do not simply measure public opinion. They also mold public opinion about the homeless crisis and local initiatives to address it, such as police sweeps.  In particular, the paper covered a proposal to grant Los Angeles Mayor Eric Garcetti -- a skilled politician adept at responding to LA’s crisis of homelessness when a camera is present -- more power over land use decisions for real estate ventures serving the homeless. 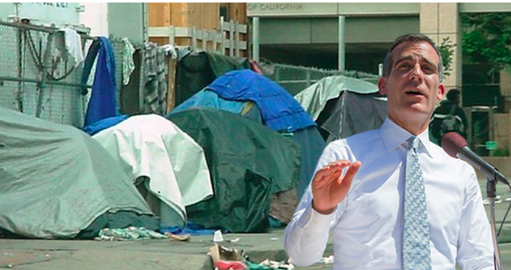 Eric Garcetti at the mike, facing the cameras, with homeless tents for a backdrop.

But, despite The Times’ multiple articles, it still ignores the critical issues. It is not a question of space or time, because given the resources, they cover the issues they deem important. Other investigators, with considerably less means than the LA Times, but a willingness to ask the right questions, have demonstrated how much can be done, such as this extremely insightful ACCE report: Who’s Buying Los Angeles: How Speculative Finance Keeps Houses Vacant and People Unhoused. This new study asks and answers some of the obvious questions that LA’s paper of record ignores, such as:

This also explains why so many planning schemes to support speculative real estate projects zigzag their way through City Hall’s backrooms -- to finally end up on a block near you. Yet, amazingly, the LA Times did not ask or answer questions about the flood of real estate capital flowing into Los Angeles, the resulting up-scale building boom, and the mismatch between these new apartments and McMansions, often vacant, and the new homeless, sleeping on nearby sidewalks and alleys.

Luckily, the alternative media is trying to answer these obvious questions, even if City Hall and the corporate media focus on secondary issues, such as migration of desperate people to Los Angeles (a small minority of the homeless population) and police harassment, an approach that, at best, moves homeless people from one block to another, often destroying their personal documents.

Ultimately, though, the real questions about the housing crisis demand real answers, and when the Band-Aids fall off and the Mayor’s increased authority over zoning decisions proves irrelevant, LA will be back to square one or even worse. It is small consolation that a thorough understanding of the housing crisis is already available and getting better. Let us hope, therefore, that the insight of British political analyst, R. Palme Dutt, from his prescient 1935 book on fascism does not come true again.  Eighty-four years ago, he wrote that farmers were burning surplus (i.e., unsellable) crops, but eventually history would witness the burning of “surplus” bodies, a development sadly emerging in Los Angeles.

(Dick Platkin is a former Los Angeles city planner who reports on local planning issues for CityWatchLA.  He serves on the board of United Neighborhoods of Los Angeles (UN4LA) and welcomes comments and corrections at rhplatkin@gmail.com.  Selected previous columns are available at the CityWatchLA archives and the Plan-it Los Angeles blog.