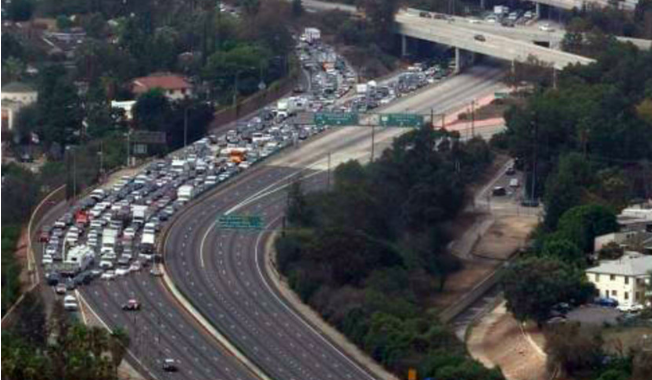 RANTZ & RAVEZ-Whatever the reason, there was a man who recently threatened to jump from a bridge along the Hollywood Freeway causing both north and south bound lanes to be shut down for 11 hours.

It all began around 11:00 p.m. on a recent Monday evening and concluded the following Tuesday morning around 10:00 a.m. For nearly 11 hours everyone traveling on the 101 both north and south bound was directed off the freeway onto local streets which soon became huge parking lots. People were late to work, court, school, doctor’s appointments and a host of other destinations. All because one individual wanted to play games with the lives of thousands of motorists trying to carry on with their daily activities. During this time, the LAPD, CHP, Cal Trans and LAFD personnel directed traffic and babysat the individual while attempting to talk him down. The man finally surrendered when he was offered some food. Case closed and traffic along the freeway resumed to its normal gridlock after many hours of frustration for both motorists and public safety officials. If you were one of the drivers caught in this mess, you will remember this nightmare for years to come.

To make matters worse, the City Controller has reported that Los Angeles is running over budget and needs to cut back on expenditures. We are talking in the area of $60 million dollars over budget. The city budget is over $10 billion dollars. Can you imagine how many LAPD, CHP, Cal Trans and LAFD overtime hours were expended on this situation? So, if you are a taxpayer in Los Angeles, you should not only be upset with the traffic mess but also the tax dollars expended for this man who was under the influence and suffering from a mental health crisis.

Can 95% of Los Angeles region residents be wrong?

The LA Times released a survey of voters and their concerns regarding the homeless population in Los Angeles. An amazing 95% of those who responded listed homelessness as the number one priority in Los Angeles. They also reflected that elected officials, homeless service providers, and advocates should implement solutions for the situation.

We’ve all done our part by buying into the publicity that more taxes would solve the problem.   Remember Measure H and Prop HHH? Both were pushed as solutions to address the homeless situation in LA County. Millions and millions of dollars were set aside to remedy the problem. Those surveyed said it best when they commented that the funds have been spent “ineffectively.”

The 95% are accurate. The money has been spent on consultants and wasted for the most part by what we see when we drive around Los Angeles. Mayor Garcetti has accepted responsibility and has not been successful in remedying the matter as we approach the end of 2019. Will the situation improve in 2020? My guess is that more money will be wasted, and you will be asked to approve additional funding. Not a very bright future when it comes to reducing the homeless population and associated factors like homeless tents, homeless vehicles parked around town and all the trash piled up by the homeless population.

More huge business operations moving out of California to Texas

It was recently reported that Chick-fil-A, Chipotle and the Starbucks Distributor will be moving their current California Corporate Headquarters in Irvine, California to the Great State of Texas. Quality Custom Distribution is part of Golden State Foods and a global supplier to the quick-service restaurant and retail industries. 10,784 square feet of office space is being acquired in Frisco, Texas which north of Dallas. The new operations will begin in January 2020.

This move follows that of Jamba Juice which moved to Texas in 2016.

What large business operations will be the next ones to join the move to Texas due to California’s many negative business factors? Texas offers business owners a large talent pool of employees, business-friendly communities and a welcoming attitude. With the Prop 13 property tax change provision coming up on the ballot next year, there may be many more operations leaving California along with the current exodus of residents.

HAPPY THANKSGIVING to you and yours

Setting aside all the negative issues we have to deal with, I want to wish you and your families a very Happy Thanksgiving. Here’s to a brighter future down the road.