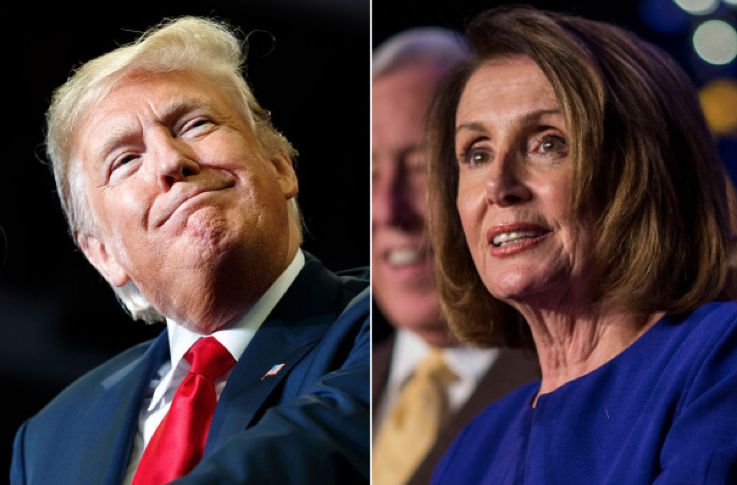 GELFAND’S WORLD--Considering that it's going to be next to impossible to remove Trump from the presidency through an impeachment trial in the U.S. Senate, people are entitled to ask why the Democrats in the House are even bothering.

There is a legitimate strategic reason, which revolves around the senatorial elections of 2020.

Let's start with the working assumptions that underlie this strategy. We have to assume that a Democrat will win the presidency and that the Dems will hold onto the House of Representatives without breaking a sweat. These are not guaranteed by any means, but they are the starting points for an outcome designed to repair some of the damage done by this administration but equally importantly, to fix some of the outrages committed in recent Supreme Court decisions.

The remainder of the strategy revolves around a net gain of 3 seats in the senate. Note that the reelection of Trump would drive the senate takeover requirement up to a net of 4 seats, but all this would accomplish would be 4 years of truly divided government and a lot of really depressed people.

If the Democrats could run the table, it would create this scenario: The House operates by majority rule, so a win by even a few seats is all that is required. By contrast, the Senate has operated for much of its history with the filibuster (which has ranged in voting requirements over the years). But all that is required to change this rule is a majority vote at the beginning of the legislative term. Fifty senators plus the Vice President could abolish the filibuster entirely. A partial abolition (say to change the size of the Supreme Court) would be even easier.

The goal here is to appoint new Supreme Court justices by enlarging the court. This could result in reversals on the most egregious recent decisions involving the balance of power between the corporations and the people.

So to create the possibility of a revolutionary change in American government starting in 2021, it is necessary for the Democrats to take control of the Senate.

What does an impeachment trial have to do with this?

Unlike 2018, the upcoming election puts a lot more Republicans at risk than Democrats. It's true that the Democratic senator from the state of Alabama is likely to lose unless he is lucky enough to face Ray Moore in a repeat of the previous election. So chalk this one up in the loss column immediately.

That means that the Democrats have to find a way to hold onto their own seats and to turn 4 seats away from the Republicans.

And that's where the impeachment trial comes in, because incumbents like the Senators from Maine (Susan Collins) and Colorado will be forced to cast their votes under the most penetrating glare. Collins has already been on the hot seat over her votes on Supreme Court nominees and on Trump's tax cut bill, and this vote is going to be even more public.

The pundits are lining up to give their evaluations. You can find a couple of  examples which describe the Democrats' chances here [] and here [https://www.nbcnews.com/politics/meet-the-press/senate-suddenly-looks-it-s-grabs-2020-n1048706]. The states that are up for grabs are Arizona, Colorado, and Maine. States that could be in play include North Carolina, Iowa, and possibly Montana. A few pundits include Kentucky as a possibility (seems unlikely) and a few analyses even include places like Kansas and Georgia.

So one point of extensive impeachment hearings -- which will uncover evidence on numerous plots and subplots -- is to put Republican incumbents on the spot. And the more that Republicans defend the most indefensible crimes committed by Trump, the worse they will look. Sure defending Trump is a winning strategy in the reddest of red states such as Alabama and South Carolina, but in any half-sane place there will be some downside. No matter what you do, you are going to have either some Republicans or some independents annoyed with you.

And the ghost is knocking on the door

Let's hope that the House committee carrying out the impeachment inquiry doesn't forget the other big story, which is the serial obstruction of justice described in the Mueller report. When Mueller testified, he was ever so careful to avoid making specific charges, possibly because he was adhering to the cockamamie idea that a sitting president cannot be indicted but can only be impeached. Mueller even spoke specifically to the effect that it would be up to the congress to make determinations about obstruction of justice. So now we have the beginning of that process.

Let's think about that idea for a moment. An official impeachment inquiry in the House opens up all those Mueller files and facts to intensive investigation. The committee should subpoena all the people named as witnesses in that report. Under the impeachment inquiry, some of the "maybe" answers will become "yes" answers. Would James Comey testify directly that he believes that Trump attempted to obstruct justice as they talked? How about a return of Michael Cohen, inviting him to describe specific instances of obstruction of justice as elements of a bill of presidential impeachment?

There is an additional line of inquiry which simultaneously pressures those vulnerable senators and at the same time adds an additional article to the bill of impeachment. Under Trump's presidency, there has been a series of cabinet officers who have damaged the nation beyond belief. They have not just been malign to our environmental interests, they have been unethical and rapacious. In states where natural wonder and eco-tourism are important parts of the economy, Trump's appointments (not to mention some of his presidential orders) have gone against environmental interests to an extent that is extreme even for previous Republican presidents such as George W. Bush.

And finally, let's ask those vulnerable senators what they think about the everyday lies of this president (now well over the ten thousand number) starting with the size of his inaugural crowd on day one.  "Senator Collins, do you still claim that Donald Trump had the largest inaugural crowd in history?" If the answer is NO, how do you respond to the twelve thousand other lies he has told?

Is this the main electoral strategy for 2020?

As our CityWatch staff reminds me, the impeachment hearings provide a backdrop for the whole 2020 election race. The process gives every Democratic candidate something to talk about, and puts every Republican candidate at least a little on the defensive. When even Mitch McConnell has been forced to say a few negative things, the power of the approach is obvious.

But if this inquiry is going to provide the central core of the 2020 election race, then how about adding one more item to the impeachment bill that isn't getting a lot of play in the media right now? Add an item accusing the president of illegally creating tariffs and trade wars. Go right to the heart of Trump's agricultural support in places like Iowa, Michigan, and Colorado. Force Republican candidates to defend the rules that have severely damaged agricultural exports, because defending Trump's presidency is precisely to defend the trade wars.

A plus for Italy

A story from the New York Times publicized the fact that Italy is promising to put environmental sustainability into its public school curriculum. Students will be taught about global warming at all grade levels. As they say at the opera, Bravo.

We might consider adding something about global warming and its effects on forest fires to our own curriculum. A few states along the eastern seaboard might think about teaching how the increased danger of hurricane damage is coming on already. Even a state like Nebraska ought to be thinking about the way that changing climate is affecting its farm practices.

And speaking of culture

I've been meaning to come back to Redcat for a while now. For those of you who don't know or might not remember, this is a theater, gallery, and bar on the downhill side of the Disney concert hall. You can even park in the Disney Hall lot when you attend Redcat.

A few days ago, Redcat hosted a band/orchestra called the Flat Earth Society, a group from Belgium which features lots of horns, winds, a keyboard, and vibes. They are musically terrific. Add thirty or forty strings and you would have a symphony orchestra (they do have one base).

They provided the musical accompaniment to the Lubitch directed, hundred-year-old, silent film comedy The Oyster Princess. I won't go into the details other than to provide a link to the way this orchestra interpreted a bit of Lubitch sarcasm. In the year of its making, there must have been some kind of enthusiasm for the dance referred to as the Foxtrot. Lubitch inserts a sarcastic title explaining that during the wedding, a foxtrot epidemic breaks out. You can catch that scene here.