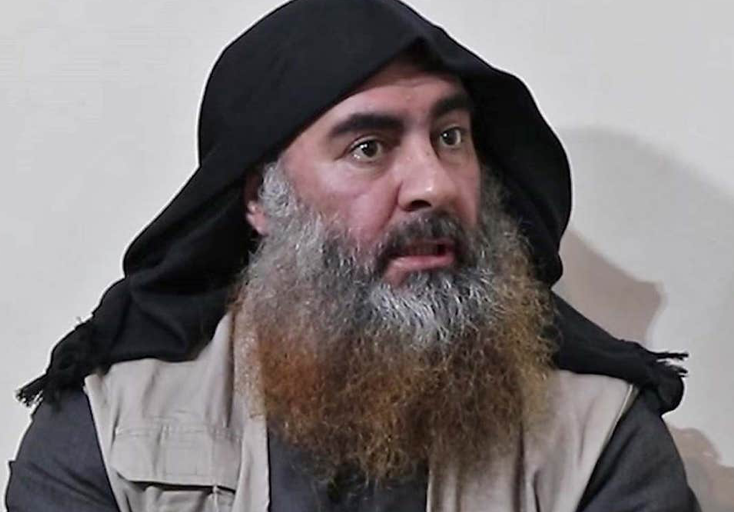 VIEW FROM HERE--Abu Bakr al-Baghdadi was a monster who deserved to be brought to justice.

To revisit here a list of his most extreme crimes would be both gratuitous and gruesome. Anyone who has been paying attention to world events, the origin and rise of ISIS, and the overall geopolitical situation in Syria, know what he has done and what he was very capable of doing again. As far as sadistic leaders go, al-Baghdadi is right up there with the titans of misery. He was as ruthless as Saddam Hussein and as charismatic as Osama bin Laden.

In many ways, he was more dangerous than both of them because he did not have any religious or political boundaries. Slaughter was his religion. Mayhem was his holy vows. And, at the end of the day, despite his elevated rhetoric about the divinely sanctioned reinstatement of the Caliphate, the death of "infidels" was the only Constitution that mattered to him. al-Baghdadi once said to his band of mercenaries: "Fight them and ambush them everywhere, increase the attacks against them. Target the infidels’ information and media centers and their psychological warfare centers ... Continue your actions ... Ensure that the Crusaders [i.e. Westerners] and those who have abandoned Islam do not enjoy a peaceful life in their homes..."

Yet, I would have preferred, if I am to be an honest and consistent liberal progressive, that he was apprehended, detained, prosecuted, and sent to prison-preferably a Syrian or Kurdish one. I am glad that he is dead, but this feeling of gladness in the death of other human beings is the true consequence of violent extremism in the first place. I am in agreement that he dictated his own demise. He was out of options and the commandos had to take him out as a result. But the murderous ideology of ISIS and the psychotic fantasies of al-Baghdadi ultimately succeed when they make human beings callous enough to stop caring about the sanctity of existence. ISIS should be the ones who stand for bloodshed at all costs, the final destruction of human rights, and the hijacking of secular law. ISIS should be the ones who hunt down their enemies and summarily execute them without a trial, or with an ounce of remorse at all for a pure, unadulterated, cold-blooded raid. Religious and non-religious warriors of ideology are the ones who glorify in killing and celebrate the loss of life-even the loss of children.

Now, I say all of this and I know in my heart that President Trump and his administration (the DOD and intelligence agencies included) did not glorify in the death of those two children that were with al-Baghdadi when he blew himself up. They would no doubt argue that he could not have been arrested because he shot at the special forces first and then proceeded to take his own life and the lives of those kids. At least this is the account reported by news agencies such as CNN, and then recounted in vivid detail by the President himself. According to CNN, "The commander of US Central Command, Gen. Frank McKenzie, said the DNA used to confirm Baghdadi's identity was from samples collected during his previous detention at Camp Bucca in Iraq. McKenzie added the terror leader "crawled into a hole with two small children and blew himself up while his people stayed on the ground."

I also know in my heart that President Trump was not thinking about those two children when he was gloating over the death of a prolific serial killer and menace to free nations anywhere. I know that he was genuinely happy that these military-intelligence agencies, special force commandos, and political alliances all worked together to achieve a major national security goal for the United States. I know all of this. Never mind that the same governmental agencies that he has demonized as unpatriotic were instrumental in making this raid happen, I can applaud the President's victory as a victory for the whole world without approving of the way he talked about it.

Trump himself said that the whole thing looked like a movie as he was watching it in real-time. Somehow he could view these events as clear as a movie screen but could not see that al'Baghdadi had three kids and not two. CNN also reported that "While Trump and other military officials initially believed Baghdadi had killed three children after detonating his suicide vest in a tunnel, McKenzie said updated information had revealed that only two children had been with him, with both of them being assessed to be under 12 years old."

What is more, the President spoke as if he was one of the soldiers in the tunnel. In his televised address from the White House, he stated that the ISIS leader was "whimpering and crying " before US commandos closed in. Trump described how al-Baghdadi "spent his last moments in utter fear, in total panic and dread, terrified of the American forces bearing down on him." "He died like a dog. ...The world is now a much safer place," he added.

Forget that Trump soon went on to talk about the heroic actions of a military dog that day. Less nonsensical and more disturbing is that top defense officials who watched the raid alongside the President in the Situation Room have demurred when asked to corroborate the President's description of Baghdadi's death. How exactly did he come to know this information?  Did he actually hear and witness those events or did those descriptions come from his active imagination? Was it reliable eyewitness testimony or political propaganda? If that question does not matter to Americans than al-Baghdadi has already won his war. Dead or alive, he has made Americans stop caring about the truth.

Sure. Trump had to pursue al-Baghdadi as a matter of Constitutional duty. With the President, I am happy that international law and order have been strengthened as a result of this military raid, and I am satisfied that ISIS has taken a serious blow. al-Baghdadi was not a hero and he did not deserve to die like one. He certainly did not deserve to leave a legacy that would inspire other radical ISIS fighters to carry on his inherently evil mission. But this can be true and we must also be careful not to celebrate death, make death into hyperbole, or tell lies about it.

Death is a crime in its own right, and the killing of another human being always demands the greatest level of somberness that we can muster. The death of two innocent children at the hands of a deranged cleric is even more sobering. There is no cause for gloating and there is no reason to be happy. It is a cause for reflection and determination; it is a time to start fighting ISIS at every level that is available to our consciousness: educationally, socially, religiously, artistically, technologically, and yes, sadly, militarily. But if we fight for the right to kill and the liberty to enjoy death, then we have already forfeited what is truly worth fighting for in the beginning.

The beginning is about freedom; it is not about death and revenge. Freedom is about love and justice. Freedom is about the future and killing one man will do nothing to stop ISIS if we do not learn how to value all life as being beautiful and worthy of having one.