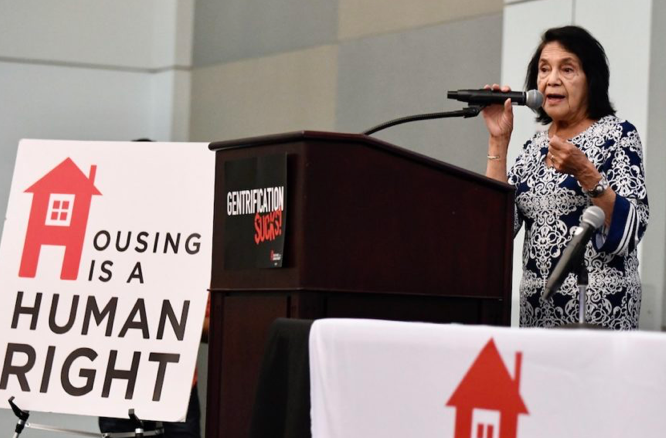 She stood inside a ballroom at Cal State L.A., on a platform, with a large screen behind her, on which a slide had been projected by a previous guest speaker. It was titled, appropriately but without her planning, “Working Together.” Before Huerta, a crowd of around 200 — many of whom were college students — sat around large round tables, and listened intently.

“I was reading the New York Times — the business section,” she quipped at one point, talking about greed in corporate America. “I call it the crime report.”

Huerta’s wisdom has been hard earned. In the 1960s, she co-founded, in California, the United Farm Workers union with Cesar Chavez. They were not welcomed by an agricultural industry known to exploit its employees, many of whom were Latino immigrants. Huerta and Chavez constantly demanded better wages and working conditions, constantly battled powerful forces, and were constantly in danger.

In the mid-60s, Huerta and Chavez started the National Boycott of California Table Grapes, which she directed. It became a nationwide cause célébre. More importantly, the strike won a three-year collective bargaining agreement with the once inflexible grape industry. She continued organizing and standing up for the poor and vulnerable.

In 1988, Huerta was severely beaten by a baton-wielding police officer, in San Francisco, during a non-violent protest. Ribs were broken and her spleen was removed; she barely survived. As the years went on, Huerta championed women’s, children’s, and LGBT issues. Almost ninety, she continues her work through the Dolores Huerta Foundation. For her decades of striving to make America more fair and just, President Barack Obama awarded Huerta, in 2012, the Presidential Medal of Freedom, the highest civilian award in the United States.

Huerta came to Cal State L.A. to discuss gentrification at “Empowering La Comunidad,” a town hall for the Latino community sponsored by Housing Is A Human Right, the housing justice organization. In L.A., an ongoing gentrification crisis has slammed longtime Latino residents in such neighborhoods as Boyle Heights and Highland Park. In Hollywood, over the years, at least 12,000 Latinos have been forced out of their homes. Huerta believed people needed to organize — and fight back.

“We have the knowledge, we have the advocates,” she said, “but what do we need? We need the people’s support. Because the only way we’re going to beat all of these millionaires that are fighting against us is with the people.”

She thought back to her time with the United Farm Workers.

“We have a lot of young people here,” she said. “How many of you have heard about the grape strike?”

“There were 40 people,” she recalled. “Forty young volunteers like yourself. 40 people, 40 farmworkers. In a year and a half, they were able to organize 17 million people to boycott grapes. Can you imagine?”

The audience broke out in applause.

“Now we have more than 40 people in this room,” she said.

“So if we take advantage right now of the activity around the (2020) census and the elections, we can organize enough people that we need to be able to get what we need in terms of protecting our communities from gentrification.”

“It’s not going to happen unless we do the work,” she said. “With the farm workers, people would say to us, ‘How are you going to organize farm workers? They’re poor, they’re not citizens, they don’t speak English — how are you going to organize them?’ And the way we organized them was by saying to them: ‘You know what? You’ve got the power. It’s in your person, and that’s all the power you need.’”

Again, nods around the room.

“But one thing that we do know from our own experience,” Huerta said, “is that if we do not do the work, it’s not going to happen. That nobody is going to come and do it for us. That we have to be the ones responsible to do the work.”

Towards the end, she shared one more bit of wisdom, but it was not hers.

The crowd gave its loudest ovation.

(Patrick Range McDonald was a longtime staff writer at L.A. Weekly, where he won numerous awards. He’s now an advocacy journalist for Housing Is A Human Right and an occasional contributor to CityWatch.)