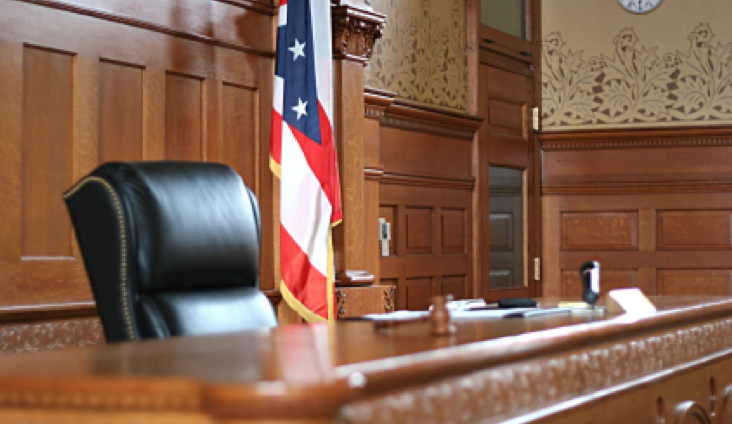 ONE MAN’S OPINION-The hows and whys of judicial corruption are very complex. Although California state courts may be the most corrupt in the nation, the plague of corrupt judges has beset mankind throughout history.

The nation has two separate and yet in ways overlapping court systems. The federal courts basically deal with federal laws including the U.S. Constitution and federal statutes. The federal courts are divided into thirteen Circuit Courts, each of which usually includes several states. California is in the Ninth Circuit.

Each state has its own court system. A case may begin in the Los Angeles Superior Court for the State of California and eventually end up before the United States Supreme Court if, for example, it involves the violation of the federal constitutional rights.

Extreme secrecy prevails in judicial proceedings. Thus, the public is blind to what is happening. For example, the courts are not subject to Government Code, § 6250, California Public Records Act, see Sec 5262(f). While the public may request copies of emails by city councilmembers who illicitly conduct official business on their private email counts, the public may never see similar emails by judges.

In ruling that public employees may not shield their behavior by hiding official communications in private email servers, the California Supreme Court wrote:

The “whole purpose” of the Public Records Act, the court wrote, "is to ensure transparency in government activities. If public officials could evade the law simply by clicking into a different email account, or communicating through a personal device, sensitive information could routinely evade public scrutiny." (City of San Jose v. Superior Court, 2 Cal.5th 608 (2017))

When the judicial system is exempted from the Public Records Act, there is zero transparency. Why should a judge’s email to the senior partner in a mega law firm about how to sabotage a class action case be secret? Judges may not “initiate, permit or consider” ex parte communications about the “substantive matters.” (Judicial Canon 3(7)(b)) Yet, we are forbidden to see even the solicitation and acceptance of bribes.

How does California justify the judicial exemption for court records which prove that judges have secret communications behind the backs of one party? Answer: Power. (Whatz ja gonna do ‘bout it?)

As Lord Acton continued in 1887, “. . .and absolute power corrupts absolutely.” It is hard to imagine a more absolute power than to cheat innocent people and be able to shield one’s corruption from discovery. The idea that a higher court will rectify corruption has no actual basis. The appellate judges likewise are beyond the reach of anyone seeing their secret communications. No outsider knows what behind-the-scenes machinations take place. The power of secrecy itself is a corrupting influence.

Don’t Think the Commission on Judicial Performance Roots out Corruption

As the State Auditor’s April 2019 report noted, prior to a CJP’s hearing on a complaint about a judge’s misconduct, a three-judge panel screens the evidence which may be presented against the judge. That’s like allowing three members of MS-13 to decide what evidence the prosecutor may bring against one of its members for narco-drug trafficking.

Can anyone get a transcript the three judges’ discussion about how to limit the evidence against one of their own? (Yes, that’s rhetorical).

If Trials and Hearings Are Public, Why Can’t the Public Record Them?

The first answer is “Duh!” The more detailed answer is that one may seek permission from the judge to record a hearing, but if that permission is granted, the recording may not be used. “The recordings must not be used for any purpose other than as personal notes.” (Cal Rules of Court, Rule 1.150 (d)) The amendment stems from 2007 when most courtrooms had transcripts of hearings. One problem was litigants’ obtaining proof that the official transcript had been doctored. Now that most courtroom have no recordings unless one party pays for them, many judges feel free to be as abusive as their personalities allow. (See CityWatch articles by Shelly Hart)

Ironically, Rule 1.150 allows “inconspicuous personal recording devices,” (with the judge’s permission) which means that most people in the court room, other than the judge, may not know that they are being recorded. Thus, one party and the judge may know the hearing is being recorded, but the other attorneys and parties may be unaware of it. That’s a kind of a quasi-ex parte communication where the two people who know about the recording can coordinate their comments to the detriment of the unsuspecting parties. Please do not be so naive as to believe that the California judiciary has any commitment to fairness or due process. If they did, they’d welcome transparency.

Harkening back to the days of Charles I of England and Louis XIV of France (L'etat c'est moi' – I am the state), the king may do no wrong. Governmental immunity is the modern incarnation of the Divine Right of Kings. Most governmental entities have waived much of their sovereign immunity which is why people who have been injured by police departments or other behavior of a city, may file civil lawsuits. Not so with the courts. Judges may not be sued even for criminal actions taken from the bench.

Most criminal behavior has a civil court counterpart. The crime of murder has the civil cause of action for wrongful death. For example, OJ was acquitted of the criminal charges but found liable on the civil claims. Police officers may be criminally prosecuted and civilly sued for theft. Due to judicial immunity, however, there is nothing a person may do when a judge steals her property and gives it to one of his friends as long as the judge does it as part of his official duties.

Judges who get special “no pay mortgages” face no claims by the litigants when the they rule in favor whoever is paying the mortgage. In fact, due to the secrecy surrounding judges, people are clueless about the how and why they were screwed.

When Corruption Becomes a Habit

Writing in the October 28, 2019 issue of the New Yorker Magazine, Jerome Groopman unknowingly shed light on judicial corruption. In Federalist Paper # 27, Alexander Hamilton argued that the good habits the federal government would instill in the citizenry would lessen the need for compulsion required to have people follow all laws. In brief, he believed that the Constitution would create in men the good habit to act with truth, justice, and honor. On the flip side, however, is the destructive force when people develop bad habits.

Who knew about chunking? A synonym may be “automatic pilot.” As Groopman continued to explain, certain series of behavior become automatic like starting the car or even driving to the same destination such as work. It takes no conscious thought, except when someone interferes. Then, anger emerges. “How dare he cut me off!” The same process operates with judges. Perched high behind the bench where no one may contradict them, they issue rulings like Thor’s thunderbolts. Judicial misconduct has become chunked; it occurs automatically. Some liken this process to Pavlovian ingrained neurological responses. Some people must smoke after dinner; others do drugs on Saturday night at a dance club. Wearing a robe and sitting behind a bench stimulate a neurology which says, “I can do no wrong.”

For Some Judges, Corruption Snuck up on Them

New judges can become habituated to power with its prerogatives and being able to pretty much do anything they please. As a result, like a spoiled brat, the only thing that matters is what they want. Mediations, which were a good alternative to the dishonesty inherent in arbitrations, have often turned into a judicial scam to fleece litigants. Conservatorship judges, for example, will order people to mediate a case before one of the judge’s friends. If the mediation is a disastrous failure, the judge will send the parties back for more mediation. The lawyers, the mediator and the judge (?) make a fortune, while the family, which has to pay thousands in mediation fees, is drained of its assets.

The Role of Narcissism in Judicial Corruption

Places where children congregate attract child predators, and the judiciary attracts people with a grandiose sense of entitlement. The power the judiciary gives persons with Narcissistic Personality Disorders is intoxicating. One of the most destructive features of narcissists is their propensity to fly into narcissistic rages (or twitter storms if they’re President). As a result, attorneys cower in silence as the outrages unfold. Some call it “playing the game.” Others simple observe, “LA judges have their own rules.” In other words, the whim of tyrants has replaced the rule of law in much of the Los Angeles legal system.

Absolute Judiciary immunity and secrecy are the two primary factors that have combined to give Angelenos a criminogenic court system.

(Richard Lee Abrams is a Los Angeles attorney and a CityWatch contributor. He can be reached at: Rickleeabrams@Gmail.com. Abrams views are his own and do not necessarily reflect the views of CityWatch) Edited for CityWatch by Linda Abrams.