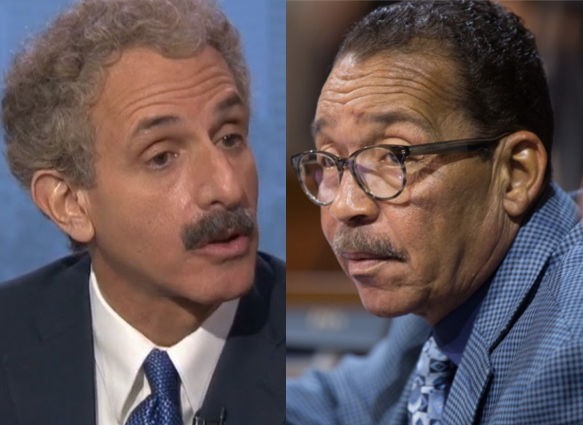 @The GUSS REPORT-It isn’t the crime, but the cover-up. Last week, CityWatch published my latest column showing how LA Times’ City Hall reporters allow corrupt-o-crat politicians like LA City Council president Herb Wesson to dodge and screen questions even though they had good reason to explore – but didn’t – the bigger issue of whether the perpetually cash-strapped lawmaker used current and former staffers to pressure businesses for freebies and discounts for the wedding of his son, Justin Wesson, to Alexis Marin, both of whom are LA City Council aides.

Such discounts and freebies, if given, would enable the senior Wesson to get direct and indirect financial benefits without reporting them on financial disclosure forms, campaign finance reports and income tax returns.

So let’s move forward with LA City Attorney Mike Feuer and his familiar practice of hiding and obscuring public records that embarrass politicians and appointees near and dear to them.

In my research for last week’s column, I requested and received from the City of LA a series of public records showing the dysfunctional master and servant communication between Vanessa Rodriguez, Wesson’s then-media relations flack, and David Zahniser of the LA Times.

Before those records were emailed to me they were screened by Feuer’s office, which is unsettling given that Feuer, who was double-degreed at Harvard, was recently raided by the FBI in a corruption probe and also because of his regular assaults on free speech and harassing those of us who exercise it.

The records I sought were first located by the City’s Information Technology Agency, ITA, and each was assigned a sequential name that included my initials, DG, followed by three zeroes, and then four numbers. The highest that any document was named was DG0002188 and the lowest was DG0002173.

That means there should have been at least 15 documents sent to me, i.e. 2188 minus 2173, at minimum, given that there could have been other documents labeled higher than 2188 and lower than 2173.

Are you following me on this?

Neither ITA nor Feuer’s office could explain where the missing documents went. Feuer’s office refused to respond altogether, but ITA took a shovel and kept digging a bigger hole.

ITA’s public records coordinator ignored several emails about the missing documents. When I elevated the issue to Kuljeet Arora, a Senior Systems Analyst, he kept referring me back to the coordinator, even though he was repeatedly told that that person was not responding; a circular misdirection. ITA General Manager Ted Ross also failed to respond to multiple inquiries about the missing documents.

Then, the unidentified coordinator improbably claimed that the documents weren’t missing, but that a faulty software program randomly skipped those four numbers without explanation. But pressed a bit, that person acknowledged that this never happened to anyone else.

True, ITA’s people deserve the benefit of the doubt, though these jigsaw puzzle pieces simply don’t agree with the claim of faulty software because ITA also refused my multiple requests for a dated, time-stamped image or report  of the raw content that was sent to Feuer’s office.

ITA also improbably claimed there is no vendor to contact when asked who is responsible for the allegedly faulty software, intermittently inferring it involved Google, Mozilla and open-source software.  The coordinator then provided a link to a website that offered zero relevant information and failed to respond when asked why he or she sent it to me.

So this column is the only victim of a renegade City Hall software program of dubious origin, with nobody responsible for it, that randomly skips sequential numbers and did this to at least 4 out of 15 documents named in that sequence.

And it never happened before.

What Feuer’s flunkies most likely did was attempt to hide the latest and most damning evidence of Wesson’s corruption, but forgot to renumber the remaining records to eliminate the gaps that the deleted records left behind.

Coincidences happen, sure, but it is impossibly naïve to believe that this is that. As written at the top of today’s column, it isn’t the crime, but the cover-up.

How long and in what direction this story goes depends on what City Hall does from here.

(Daniel Guss, MBA, is a member of the Los Angeles Press Club, and has contributed to CityWatchLA, KFI AM-640, 790-KABC, Huffington Post, Los Angeles Times, Los Angeles Daily News, Los Angeles Magazine, Movieline Magazine, Emmy Magazine, Los Angeles Business Journal and elsewhere. Follow him on Twitter @TheGussReport. His opinions are his own and do not necessarily reflect the views of CityWatch.) Prepped for CityWatch by Linda Abrams.