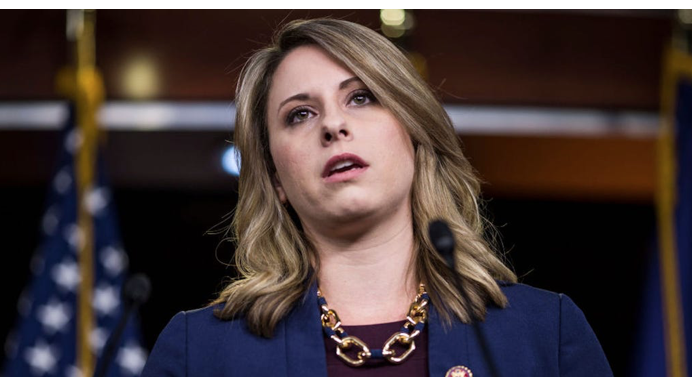 BCK FILE--Rep. Katie Hill had so much promise. Representing the 25th District, Hill had defeated Rep. Steve Knight in what had been a conservative stronghold.

She held positions in both the House Democratic leadership and as vice chair of the House Oversight Committee. Hill was a rising star.

But all of that came to a crash Sunday when Hill announced her resignation following allegations of an improper sexual relationship with a male legislative director, which she has denied. Last week, she had apologized for a relationship with a female staff member on her campaign. “I know that even a consensual relationship with a subordinate is inappropriate but I still allowed it to happen against my better judgement,” she wrote in a letter to her constituents.

In an earlier statement, Hill had pointed to her estranged husband when several nude photos of the congressional representative had been published in conservative online news outlets.

While Hill has denied the relationship with the staffer that was under congressional investigation, regardless of the outcome, it’s difficult to consider the scenario without looking through the prism of the culture that has not only provided free passes to men in power but also enabled their behavior of abuses.

The night of Hill’s resignation, I discussed the circumstances with a friend who pointed out the numerous men who had seen their political careers fade into the sunset after sex scandals, people like John Edwards, Eliot Spitzer, Mark Sanford, and Anthony Weiner. We can probably add the recent slate of men like Bill O’Reilly and Matt Lauer to the list.

While it is against congressional rules to have a relationship with a subordinate staff member, it bears repeating that Hill has denied having a relationship with her legislative director. The men above either suspended campaigns or resigned following additional lapses.

John Edwards had suspended his 2008 bid for presidency after the National Enquirer had leaked photos of a pregnant Rielle Hunter with whom he had been having an extramarital affair. In 2011, the politician was indicted by a federal grand jury in North Carolina on six felony charges, including four counts of collecting illegal campaign contribrutions, one count of conspiracy, and one count of making false statements. The Federal Election Commission ruled the Edwards campaign must repay $2.1 million in matching federal funds. A jury round Edwards not guilty on Count 3 of illegal campaign funding and mistrials were declared against the other charges. The Justice Department dropped the charges.

Eliot Spitzer resigned as Governor of New York in 2008 after the New York Times reported he had patronized an escort service known as the Emperors Club VIP, which he had publicly disclosed before resigning. Spitzer had been investigated after a bank reported suspicious transactions to the Treasury Department’s Financial Crimes Enforcement Network under the Bank Secrecy Act and Patriot Act provisions to combat money laundering. He was believed to have paid up to $80,000 for the services of sex workers, as attorney general and as governor.

Gov. Mark Sanford was censured by the South Carolina General Assembly and resigned as chair of the Republican Governors Assocation after revealing he had engaged in an extramarital affair. He finished out his second term, despite leading his staff to believe he was hiking on the Appalachian Traill when he was in Argentina visiting his mistress. Sanford successfully completed a bid for Congress, where he served from 2013 to 2019. He has also announced he would be running for the Republican presidential ticket for 2020.

When Rep. Anthony Weiner was serving in the House of Representatives in 2011, he was caught in several sexting scandals. He resigned from Congress  and went on to run in the New York mayoral race in 2013, when additional photos were released. Weiner admitted to sexting with three other women and stayed in the race, finishing third. When an investigation into Hillary Clinton’s emails revealed Weiner had sexted with a 15-year old girl, in 2017, he pleaded guilty to one count of transferring obscene material to a minor and was sentenced to 21 months in prison.

For each of these men, there’s a long roster of others who have continuously engaged in everything from sexual harassment to abuse of minors. The sitting president has faced dozens of sexual abuse allegations In March, a New York Appeals Court ruled that the president must face a defamation suit filed by Summer Zervos who had accused him of sexual assault. The “Access Hollywood” leaked tape in which Trump bragged about his ability to grab women by the crotch didn’t derail his run.

The free pass zone for men accused of everything from sexual harassment to assault of adults and minors seems to be generous. Ronan Farrow’s recent book “Catch and Kill” lays out the tortuous winding road of nondisclosure agreements, pay-offs, and enabling of abuse to protect the power-holders, people like former Hollywood producer/mogul Harvey Weinstein and Matt Lauer.

If indeed Katie Hill did engage in an inappropriate relationship with a subordinate, against Congressional policy, she should be held accountable. However, men in power must be held to the same standard. As long as we give men in power carte blanche to abuse and assault women, laying people like Katie Hill at the ground serves no purpose. It’s time to kick the double standard to the curb.