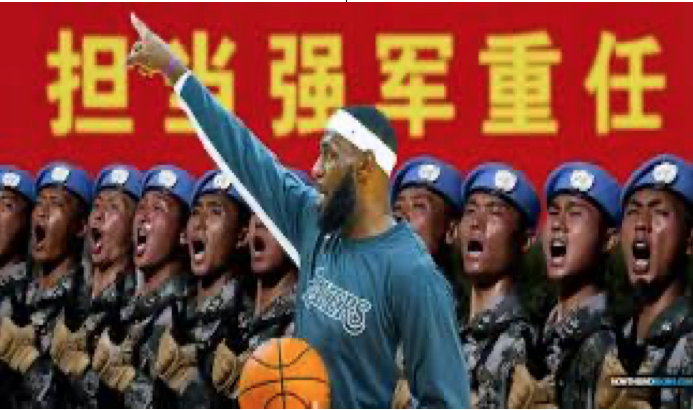 ALPERN AT LARGE--For those of us who remember the Cold War, the influence of Western civilization was supposed to crack the Iron Curtain and the Berlin Wall with the messages of freedom of speech and religion, capitalism, entrepreneurism, and the plight of the ordinary man or woman.

And it worked. East Europe and Russia and much of Asia were liberated, and we now have a global economy. Much of it worked in China as well, with capitalism and a bit more freedom of expression the new normal.

Men and women gave up their lives and economic futures, and both Democrats and Republicans, liberals and conservatives, learned and lived through history and eschewed both tyranny and communism. JFK and Nixon, Reagan and Carter,

Then a few terrible things happened:

1) People started looking at the terrible wars and lessons of the 20th Century to be as relevant as those of the 19th Century.

2) History in general began to be ignored, if not downright rewritten, by the same creeps who were proclaiming the virtues of the Soviet Union and/or Cuba while we fought the Cold War.

3) Socialism and communism became more in vogue by younger folks who wanted things to be easy and who felt that "leadership" meant having a few "correct-thinking" people run roughshod over everyone else (because history would thank them later, of course).

4) Greed over all became the "New God", and virtue-signaling by the Left became as rationalizing of self-obsessed avarice of the former right-wing and/or Christian virtue signaling of the 1950's.

So now we have anti-heroes to replace Jesse Owens (who ran so fast and humiliated Adolf Hitler and the eugenics-loving Nazis) and Muhammed Ali (who lost his boxing title and went to jail for refusing to be drafted during the Vietnam War that he opposed) and Jackie Robinson (who endured quite a bit of racism being the first black American in major league pro baseball). The courage of the athletes who represented the best of the United States and Western thought appears to be over.

Particularly during an era where Owens, Ali, Robinson and other heroes are all but forgotten by Millennials who eschew history and Western thought as much as we all once eschewed tyranny and communism.

Enter Colin Kaepernick and LeBron James--so "woke" and so "brave" and so "courageous"...

...and so damned rich that we're all supposed to love and admire them for it.

But they "knelt before Zod", to paraphrase the Superman epithet, and did so by getting on their knees for slave-labor Nike and a President-for-life Xi of China.

And they expect us to rip on Houston Rockets General Manager for tweeting what used to be a harmless and admirable message of support for Hong Kong residents who are about to lose their basic freedoms, and to just keep selling to and buying from China.

But...they're RICH! Which means they're GREAT!

But...they're FAMOUS! Which means they're GREAT!

But...they're WOKE! Which means they're GREAT!

So, keep buying Nike shoes! Keep buying things "Made in China"! Kaepernick's and James's "Make America Great Again" has become synonymous with "Just Do it".

Well, China is "just doing it" to Hong Kong and America (ever tried to buy an affordable home in California lately, or for that matter just about anywhere else?).

It should be remembered that Kaepernick and James really haven't had to suffer much, or had their lives tested much, as were Jesse Owens or Muhammed Ali. They've gotten a lot of money ripping their own nation, and sucking up to Zod...er, President Xi.

So, while the rest of us are supposed to admire them as "civil rights" icons, perhaps we should look at those real civil rights icons who suffered and risked all to get to where we are now.

But Kaepernick and James--just a lot of money, and no risk whatsoever. Maybe it can be argued that they've got working brains (selfish, working brains, but working, nevertheless), but they've got no working heart or spine. And if it's not too low-brow of an expression, no balls, either.

I used to love the NBA and NFL...but if they go down from all of this then they can blame themselves only.

Because when we watch pro sports, we still want heroes...and not a bunch of overgrown manchildren crybabies who have no clue of what courage really is.