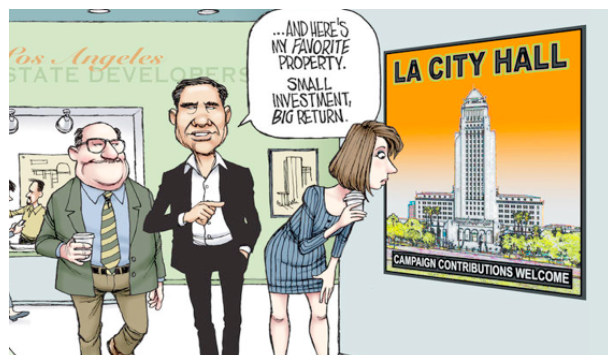 ONE MAN’S OPINION-Family therapists know that families often ignore the elephant in the living room.

They overlook trouble caused by the father, mother, brother, or sister who is an alcoholic. What’s worse, they make excuses and cover-up for them. What is beyond comprehension is how anyone can ignore herds of elephants rampaging throughout the entire house. That’s the condition we face in Los Angeles. Our house is in shambles.

The measures of LA’s deterioration from the nation’s premier destination city in 2001 to the least desirable urban area by 2015 are too numerous to list in each article I write. We’ll limit ourselves to just one fact, which has been known for years: Los Angeles is losing population.

And we are not the only city suffering this fate, although it is far worse for LA than for Chicago and New York. For one thing, we are LA! We have no snow, no freezing rain, no horrible wind off Lake Michigan, no endless dreary winters days with brown slush on the sidewalks. In brief, Garcettism is turning paradise into a cesspool.

The common element to our decline is the fact that the LA City Council is a criminal enterprise. The reason Los Angeles dropped so far so fast was just documented by Mark F. Mauceri in his CityWatch article, “Vote Trading: Alive and Well at LA’s City Hall.”

As Mr. Mauceri pointed out, a conspiracy to commit a felony does not have to be in writing. The Manson family didn’t put their agreement in writing. No, don’t complain about the Manson family comparison. The actions of the criminal LA City Council, which have received judicial protection, have killed more people than the Manson family. We should stop and actually think about it rather than denying that We the People have allowed Garcetti et al to shove people onto the streets without basic facilities with certain the knowledge that a percentage of them will needlessly die.

One need not know the identity of a victim to be guilty of murder. If you throw ten toddlers off the Santa Monica pier and three of them drown, you do not escape murder charges because you did not know which kid would die. Likewise, when your criminal vote trading system pushes tens of thousands of the poor, elderly and ill people into homelessness, there is no need to know which person will die. It has been well documented that Garcettism has killed hundreds of people.

In 2012, the LA City Council was shocked when it was told to cease and desist in its criminal enterprise of the vote trading system. It was urged not to follow the vote trading agreement when Garcetti’s Update to the Hollywood Community Plan came before the council in the near future.

The only Councilmember who heed that call was Jan Perry. In a private meeting with Hollywoodians Encouraging Logical Planning, she said that if the Plan was as defective as alleged, she would not vote for it. She kept her word but with a twist: she skipped the city council meeting on June 19, 2012. Yes, she kept her word, but without transgressing the mandate that she vote Yes if she were present.

On June 19, 2012, when the Hollywood Plan was before the Council, Councilmember Richard Alarcon was bold enough to question whether the Hollywood Plan Update could not be redone so that its flaws could be rectified. Director of Planning Michael LoGrande was too flummoxed to make a coherent response, but after beating around three or four bushes, City Planner Kevin Keller admitted that the Update could be redone. Then, a very displeased CD13 Councilmember Eric Garcetti invoked the criminal vote trading system by staying that the Update had to be approved. And, so it was. . .unanimously.

Two years later in January 2014, Judge Allan Goodman threw out Garcetti’s update for the same reasons that Councilmember Alarcon had objected to it. Its data was fatally flawed, and it subverted the law.

The Criminal Vote Trading Agreement Is Not New News

In 2006, former Director of Planning Gail Goldberg warned us that the criminal voting that allowed developers to set zoning was leading to disaster. See Steven Leigh Morris’s article in the LA Weekly from February 7, 2008: “City Hall's ‘Density Hawks’ Are Changing LA's DNA.”

As I warned in CityWatch back in 2012, in my piece called “Hollywood Becomes Fraudywood,” the LA City Council has long been mired in fraud and corruption.

The criminal nature of the vote trading was also analyzed in 2016 in Zwartz Talk.

As Mr. Mauceri astutely pointed out a few days ago, not a single councilmember denied it when Cedillo accused them of being habitual felons. Silence in the face of an accusation when one has a chance to speak is an admission. Of course, if anyone had denied the vote trading pact, everyone in council chambers have would broken out in gales of laughter with people rolling in the aisles holding their sides.

Deferring? If You Believe That, I Have a Bridge to Sell You

Let’s put to rest one of the most absurd ideas about this vote trading system. Deferring is no defense, any more than “your money or your life” is a suggestion. When A defers to B on the condition that B will defer to him, we have bribery by vote trading.

Let’s leave aside the obvious that the chance that 10,000 consecutive unanimous Yes votes for projects could happen without vote trading is less than one in infinity and go the traditional route -- flip the small fry.

There are always some lower level people to flip. The vote trading is no secret and there are scads of present and former city hall employees who will flip in return for immunity. Furthermore, these insiders often know what the developer paid and how he paid it. If you think the college admissions scandals are never ending, you have not seen anything until you see the ways in which developers have bought councilmembers. No, it is not with a few shills making illegal campaign donations as Jackie Lacey would have you believe with her prosecution of Sea Breeze developer Samuel Leong.