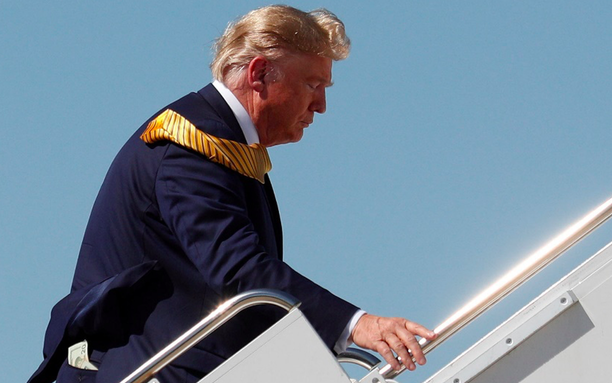 AN AMERICAN CRISIS--During a fundraising trip to California this week, President Donald Trump hinted at his administration’s imminent crackdown on the state’s homelessness crisis.

Speaking as he disembarked from Air Force One in the Bay Area yesterday, he deplored the fact that “we have people living in our best highways, our best streets, our best entrances to buildings, where people in those buildings pay tremendous taxes.” The problem had gotten so bad, he said, that “our policemen on the beat are getting sick.” (Photo above: President Donald Trump boards Air Force One in Mountain View, California, on September 17. (Reuters / Tom Brenner TPX Images of the Day)

Secretary of Housing and Urban Development (HUD) Ben Carson flew to California the same day to detail the administration’s plans for dealing with the crisis. Carson was vague on the details of the administration’s approach, but previous reporting in The Washington Post had suggested that the White House was proposing to demolish tent cities in San Francisco and Los Angeles, increase the “role of police” in monitoring homelessness, and potentially incarcerate the homeless in government-run facilities.

“The local government should back the police up,” Carson said. “People can make it very clear without having a big policy change whether they support law enforcement.”

Carson’s boss has frequently bashed California for political points, taking aim at everything from the state’s “sanctuary city” policies to its forest management. And the real problem of homelessness in California is a cudgel Trump will use to attack the Democrats ahead of the 2020 election. Yet as bad as Trump’s ideas are, they aren’t unique—in fact, they sound a lot like Democrats’ existing proposals in liberal cities.

Until now, the Trump administration has mostly ignored the issue of homelessness, leaving federal supportive housing grants almost untouched. After around a decade of improvement, overall US homelessness rates have started to rise again, albeit by just half a percentage point. Still, the White House’s disregard has probably been good for the country’s unhoused.

Now that Trump is again disparaging California, the administration is bringing its characteristic mix of cluelessness and cruelty to bear on the crisis. The administration’s view of the issue, described in a report released this week, is that a major driver of homelessness is “the tolerability of sleeping on the street.” It also speculates that “the extent of policing of street activities may play a role” in reducing unsheltered homelessness. The phrase “affordable housing” appears just twice in its 41 pages.

Ahead of Trump and Carson’s California visit, HUD sent a team of officials to Los Angeles and other California cities on what administration officials called a “fact-finding mission” to meet with local homelessness officials and visit encampments. The details of the “mission” are unclear, but The Washington Post reported that officials expressed interest in destroying encampments such as Los Angeles’s Skid Row, increasing police presence, and forcing homeless populations into an unused Federal Aviation Administration facility in nearby Hawthorne. (One government official told the Post that the latter was “the stupidest idea I have ever heard.”)

The administration’s proposals drew backlash from California Democrats like House Speaker Nancy Pelosi, whose spokesperson said, “The Trump administration’s heartless policies have only exacerbated the matter, harming the most vulnerable in our society.”

Trump’s proposed policies are horrifying, but their underlying logic—treating homelessness as a crime—is not unique. Although liberal city leaders around the country may put more emphasis than Trump on affordable housing and supportive services for vulnerable populations, these leaders also treat unsheltered homelessness as a problem to be arrested, ticketed, and pushed out of sight.

In Los Angeles, for instance, where homelessness has risen 75 percent in the last six years, Mayor Eric Garcetti responded last fall with a “crackdown” of his own, beginning a series of LAPD raids of homeless encampments that have continued for almost a year. And in the Bay Area, where Trump spoke Tuesday morning about the evils of progressive policy, city officials have staged multiple raids this summer on homeless camps in Francisco and Oakland, disassembling wooden homes and arresting anyone who occupied them and had an outstanding warrant. California Senator Dianne Feinstein, when asked about Trump’s comments, sounded sympathetic: “To a great extent,” she said, “I agree.”

These anti-homeless policies aren’t an issue just in California, either. In New York City, an uncommon law technically guarantees most homeless people a bed in a city shelter, but thousands of people still sleep on the streets and subways. When they do, they frequently encounter a harsh and punitive police presence: The Metropolitan Transportation Authority intends to hire 500 new officers this year to enforce “quality of life” on the subways, and it also deployed more police last month to arrest homeless people on subways and buses. These actions followed a separate crackdown last year in which subway employees were directed to forcibly remove homeless people from stations. And in Denver, where city officials have considered giving homeless people the right to camp anywhere, local police spent May and June tearing down encampments around the city.

If you like this article, please give today to help fund The Nation’s work.

Residents of these liberal cities, meanwhile, are often no kinder to the homeless than their political representatives. In April, hundreds of residents in Pelosi’s own district stormed a city meeting to protest a proposed homeless shelter in downtown San Francisco. A few months later, residents elsewhere in San Francisco sued to block the construction of another shelter on the grounds that it would have “a significant effect on the environment…by attracting additional homeless persons, open drug and alcohol use, crime”; residents in Los Angeles have sued to block affordable housing developments on the same grounds. In New York, the city’s initiative to build 100 new shelters in 10 years has been met with resistance both in ritzy parts of Manhattan and in lower-income neighborhoods in Brooklyn and Queens.

“It’s understandable that people who aren’t homeless want something done about the issue,” said Nan Roman, executive director of the National Alliance to End Homelessness, “but people who are homeless also want something done about it. “The police might have a role, but they don’t really have the tools to respond to the issue—all they can do is arrest people, ticket people, destroy camps, and [the homeless are] back on the street the next day and nothing has changed except that they now have an arrest record.”

Democratic politicians are right to deplore Trump’s militaristic plan for dealing with homelessness. It

will endanger vulnerable people and do nothing to fix the underlying causes of the crisis. But politicians like Pelosi and Garcetti should also consider what’s going on in their own backyards, where residents and political leaders also treat homeless people as a population that is best made invisible.

Despite the callousness of Trump’s CEA report, experts and advocates are clear that affordable housing and supportive services are the only long-term answers to the problem of homelessness. Until local and federal politicians turn to these solutions instead of policing and incarceration, neither party will fix the crisis.