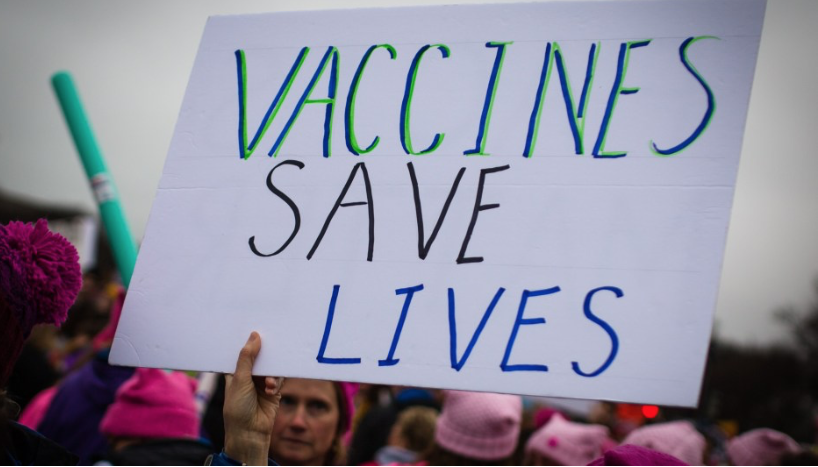 BCK FILE--In 2000, the number of measles cases reported to the Centers for Disease Control (CDC) was 86.

Measles, caused by the rubeola virus, used to be a fairly common childhood disease, which carried the risk of serious complications, including death. However, routine vaccines had close to eradicated the presence of the virus.

From January 1 to August 29, 2019, according to the CDC, 1,234 individual cases of measles have been confirmed in 31 states. This is the greatest number of cases reported in the United States since 1992.

Measles is much more likely to spread in communities where large numbers of the population have not been vaccinated against measles.

Dr. Bob Sears, the son of well-known parenting author Dr. Bill Sears, has become a central figure to the movement of parents who question conventional science, medicine, and public health conventions, choosing not to vaccinate their young children. In 2007, the Capistrano Beach pediatrician, wrote “The Vaccine Book: Making the Right Decision for Your Children”, a best-selling book in 2007, proposing to parents that they had an alternative to the conventional vaccine schedule during the first 2 years of life. The doctor acknowledges there is no medical research to back his theory.

In a September 3 article, Los Angeles Times writer Melody Gutierrez describes Sears’ mantra as “It all comes down to parental choice.”

We live in an era where personal freedoms are valued more than the common good. Certainly, our individual liberties are an integral part of our American way of life. We rightly fight to uphold the Bill of Rights, and in particular, the First Amendment rights. However, in some instances, the needs of the greater community must be balanced with our individual desire to, let’s say, carry a run into a grocery store, yell “Fire” in a crowded theater, drive while intoxicated or fly in the face of medical and public health recommendations when it comes to childhood vaccinations.

It’s understandable that parents want what’s best for their children. Parents may be leery of government regulatory agencies. Perhaps, a personal experience led them to see vaccines as unsafe. As a result, there are more unvaccinated children, young adults, and adults in our communities.

Before the measles vaccine, an average of 450 people died from measles each year--most of them children. Choosing not to vaccinate or delay vaccinating children not only leaves the unvaccinated vulnerable to measles, as we can see in the 1,234 cases this year to date, but also leaves infants who are too young to be vaccinated and others who may not be vaccinated due to existing health conditions vulnerable to measles.

The American Academy of Pediatrics (AAP), the Centers for Disease Control and Prevention, and the American Academy of Family Physicians all recommend children receive the measles, mumps, and rubella (MMR) vaccine at 12-25 months and a booster at 4=6 years or earlier, as long as the second dose is at least 28 days after the first. Infants too young to be vaccinated are at highest risk for serious illness, hospitalization, and death due to measles. Another version of the vaccine, MMRV, also protects against Chickenpox.

What about the safety of vaccines?

The Centers for Disease Control and Prevention Immunization Safety Office, which conducts studies to determine whether health problems are caused by vaccines, states that data shows the current US vaccine supply is the safest in history. Vaccine safety reports and published research is available on the CDC website.

Along with the CDC, the FDA takes numerous precautions to ensure the safety of vaccines, both before and after the vaccines are administered to the public. The FDA oversees extensive laboratory testing, including clinical studies, before a vaccine can be licensed. Following licensing, the FDA, CDC, and National Institutes of Health (NIH) continue to regularly monitor usage and investigate safety concerns.

Community or “herd” immunity is important for everyone, but especially people who immuno-compromised.

An Example of Community Immunity

In June, New York State joined California, Mississippi, and West Virginia in requiring a sound medical excuse for exempting children from vaccinations. While there is no federal law, 10 states allow exemptions for philosophical reasons and most states, other than New York, California, Mississippi, and West Virginia, allow exemptions for religious reasons.

While the decision to immunize may seem like a personal parenting choice, immunization protects the greater community. The risk of serious health consequences is far greater when children are not immunized.