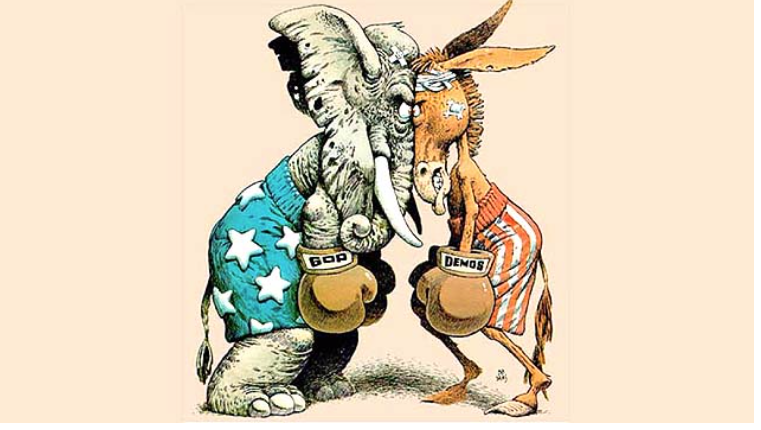 ALPERN AT LARGE--Once Upon a Time, there was bipartisanship, a Common Enemy who was either Hitler or Stalin or the Ayatollah Khomeini, and both Democrats and Republicans disagreed with each other but respected each other's talking points as issues that we ignored at our collective peril.

Government oversight was cherished and respected, and government restraint was demanded and proclaimed as "good government".

That is now over in the state of California, and much of the United States.

Oh, it's progress, all right...just not the sort of progress that might be considered "good progress". And the "new progressive" is anything but liberal (a term that implies open-mindedness and education).

But, for many of us who are centrists, and in particular JFK Democrats who remember the virtues of being a centrist, it is tough to be told that WE are the evil, Hitler-esque racists and cruel class-elitists ...

...after working a lifetime of exhaustive and nonstop (and often without pay!) civic and family roles, mixing as well multiple jobs to save up for and pay down a mortgage.

For those of us who remember Proposition 13, it was because we had a huge budget surplus and property taxes driving people out of their homes. Perhaps it was unbalanced and not ideal, but government was told to WATCH IT! with respect to not taking taxpayers for granted.

Now, it's someone ELSE who will pay the taxes...whoever those people are (maybe the billionaires of Silicon Valley, right?) and with an exodus of the Republicans and moderate Democrats (and even liberal Democrats who have concluded they want to keep their hard-earned money), the remaining taxpayers are now having to rethink about if their taxes are high enough.

But be prepared...for the "woke" of all ages, especially those who don't pay that much in taxes, will tell the rest of us that we're spoiled and rich and selfish.

It is certainly IS a problem of having too many foreign and domestic landowners jacking up the cost of apartments, condos, and houses. Bad people...REALLY bad people, and too many of them have scoundrels in both the Democrat and Republican wings of the Legislature supporting them.

And we have SB50 and SB330 to show for that, which will be among a slew of horrible bills working its way to the Governor...and with a Mayor of L.A. who is fine with them, and all sorts of creepy developers who will the coast of California one big "Shanghai By The Sea", and a supportive Governor, to boot.

I've already written about how Governor Newsom, State Senator Scott Wiener, and Mayor Garcetti are as big into uber-development as President Trump (maybe worse, because they really want Silicon Beach, Silicon Valley, etc. and don't give a damn about the pesky, dying, fleeing middle class).

But for those who feel they've got the wind at their back, they might have a bit of a surprise in store for them....because when you ask someone else to take care of you...they'll "take care of you", all right!

And Resist they shall, despite their heroic selflessness and desire to make a better future for the lower and middle classes (and not just for the rich). They will be accused of killing zoning reform while fighting to preserve California from a lawless form of NO zoning rules altogether.

You know who you are.

As even thirtysomethings decry the complete ignorance of high school and college graduates (who've never stayed awake for the names and terms like Stalin, Mao, Che Guevara, Castro, Noriega, 1945, 1948, 1967, 1973, Vietnam, Korea, Munich Olympics, Iron Curtain, FDR, Reagan, or JFK, to name a few), we will look forward to an Orwellian future...

...led by those who don't even know what the term "Orwellian" means or references.

Both Republicans and Democrats want a better environment, if the bigots who take the time to know them will learn, because we all have families and enjoy healthy living.

And there are both Republicans and Democrats who both tolerate and enable China and other foreign nations to trash the environment, cause climate change, and hurt the planet way more than anything we're fighting to do here...to say nothing of encouraging birth control in nations that need it the most because THAT is the real problem behind our environmental threats.

But we don't teach what form of environmental science efforts are smart, cost-effective, or practical. We just teach indoctrination and don't demand students question EVERYONE...including their teachers, rock star faves, and Hollywood high-school-dropouts who are pushing narratives so false it's even hard to believe that they are even being talked about.

And even the JFK Democrats ("Ask not what your country can do for you, but what you can do for your country) will now be confronted as selfish, self-absorbed, and ignorant by those who best illustrate those very same characteristics.

So, where does that leave centrist, selfless, civic-minded Californians in the 21st Century.

Maybe to other States, or at the very least to a State of Confusion.