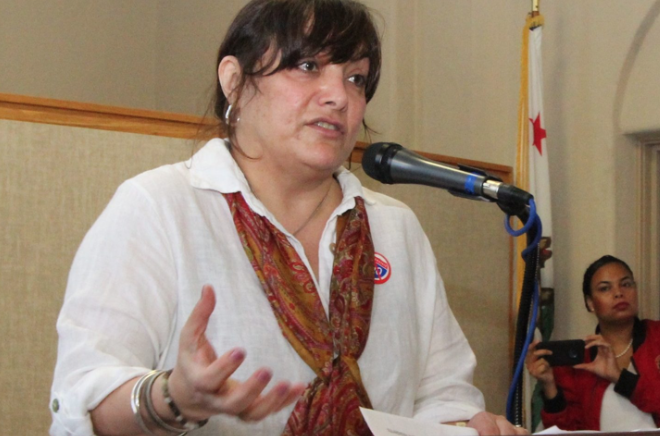 NO ONE ABOVE THE LAW-On August 27, 2019 I sent the following complaint to LA County Deputy District Attorneys Alan Yochelson and Michele Gilmer:

Please accept this as a formal Brown Act complaint and acknowledge that you have received it. For some time now, the office of Los Angeles Mayor Eric Garcetti has been hosting a semi-annual "convening" of Los Angeles County mayors. The events are closed to the public. A recent news story indicated that South Pasadena Mayor Marina Khubesrian, (photo above) who will host the next closed-to-the-public "convening" here in South Pasadena, regards even the date and time of the event as private information.

Entire local legislative bodies routinely attend this closed-door event. Unusually, the City of El Segundo posted video of the "convening" they hosted in December of 2018, in an event that was similarly closed to the public and not announced to the public as a public meeting under the terms of the Brown Act. Around the thirteen-minute mark in this video, you can watch the entire El Segundo City Council stand up and introduce themselves, one by one, shortly after two members of the Malibu City Council introduce themselves.

In addition, South Pasadena City Attorney Teresa Highsmith, in an Aug. 26 email message to me and to Ms. Gilmer, acknowledged that multiple city council members will attend from cities throughout the county: "I understand that there will be a keynote speaker at the event,  but that the event is closed to anyone other than Mayors and City Council members from the various Los Angeles County cities, although there will apparently be press coverage."

So: examples of entire local legislative bodies, routinely attending meetings of countywide elected officials to discuss public policy measures, in meetings that are closed to the public and held without public notice.

Beyond question, these meetings are conducted for the purpose of discussing matters that fall under the subject matter jurisdiction of the local city councils in attendance. In the news story linked above, South Pasadena Mayor Marina Khubesrian indicates that she will lead discussions on local earthquake preparedness and community choice aggregation (while the City of South Pasadena is a party to a Joint Powers Agreement creating a community choice aggregator).

In the video linked above, from around the 7:00 mark to around the 10:45 mark, Los Angeles Mayor Eric Garcetti describes the purpose of the "convening," explaining that the assembled elected officials are there to discuss public policy matters that are related to "our survival." These are not "ceremonial" meetings, or close to it. These are policy discussions, held in rooms closed to the public, in the presence of entire local legislative bodies.

The Brown Act does not require a vote or an action for a meeting to occur, instead defining a "meeting" as any gathering of a quorum of a local legislative body to (emphasis added) "hear, discuss, deliberate, or take action on any item that is within the subject matter jurisdiction of the legislative body."

Whole city councils are routinely attending private meetings to discuss public policy with other elected officials. This is not simply a Brown Act violation, this is a consistent, sustained pattern of Brown Act violations. Please act to prevent the further attendance of entire city councils at Mayor Garcetti's semi-annual "convening" of mayors, starting with the meeting planned for the month of September in South Pasadena, and please investigate prior "convening" events sponsored by Mayor Garcetti's office to determine if entire local legislative bodies were present for substantive discussions of public policy that were closed to the public and conducted without public notice or posted agendas.