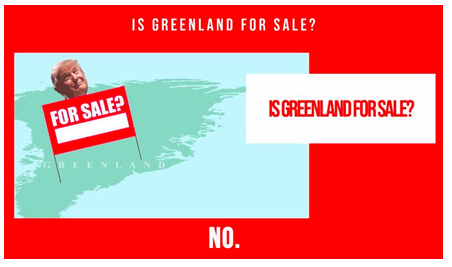 ALPERN AT LARGE--Suddenly, Greenland is in the news. Trump raised the idea of buying Greenland but wasn't too serious.

Yet now it's all over the news, and a source of both derision and contempt about how we're so debt-ridden and we're talking about a big land purchase.

There are two standard approaches/responses to this new issue in this so-called "Age of Trump". There's the approach/response of "I hate Trump. He's a con artist, and this is just a stupid real estate deal. He's an idiot, and we're drowning in debt. What on earth are we talking about here? Greenland is its own country."

Certainly, this idea might appear prima facie to be entirely ridiculous and absurd. The Washington Post said as much, but even that anti-Trump paper admitted something very, VERY important: China wants, or is at least very interested, in Greenland, too.

So, the other approach/response to the sudden surge of interest in Greenland is as follows: IT'S TIME TO PLAY CHESS, NOT CHECKERS, WHEN IT COMES TO CHINA. DITTO FOR RUSSIA.

To anyone who ever picked up a history book, and/or went to China or Russia, it's not hard to conclude that those two realms don't give a tiny fraction or rip about their people the way America does for its people.

That harsh, painful reality is especially true for China. Its environmental policies are by far, far more responsible for our current global ecologic, climatic, and other related crises than the United States. China's approach to population growth and human rights is abdominal, and China really doesn't give a damn if tens of millions of its own, or other, citizens suffer or even die.

One might argue that the INTEREST in getting Trump elected, or getting Bernie Sanders elected, was in large part due to the increasing awareness that both Presidents George W. Bush and Barack H. Obama's collective economic surrender to China was becoming an unsustainable and existential threat to the United States.

If George Bush or Barack Obama is "your guy" and raising this gets you all hot and bothered, then that is your right. But you're also proving my point.

China doesn't play checkers, it plays chess. It's building manmade islands in the South China Sea to "expand" its borders, and the once-free people of Hong Kong are having their own Cold War moment.

China is responsible for the decades-old threat of North Korea and is threatening the Philippines. Its investors and citizens are gobbling up huge hunks of Canadian and American real estate, and only now is there some small interest in combating that.

And China offered to build three new international airports on Greenland, which "sparked alarms in Copenhagen and Washington".

If you think that American capitalism has created a humongous and cruel income inequality crisis, just think of how that would play out in a Chinese-dominated world. It's doubtful that the New World Order envisioned by George H.W. Bush was one dominated by Chinese hegemony.

Does climate change bother you? Certainly, after seeing the melting glaciers of Alaska, Montana, and the Canadian Rockies with my own two eyes, it bothers ME.

Yet I am also a physician/scientist and am aware that what we can reasonably or realistically DO (not just feel-good legislation, or legislation that cripples our economy) is entirely questionable--if not downright PAINFUL--to address.

Man-made climate change is coming from the rising nations of China and India in ways we have no ability to confront, and the issues of population growth and women's rights are ones best confronted in continents OTHER than North America (even Mexico's population is decreasing).

Hence the idea of buying Greenland might seem silly, and probably IS silly. Yet Greenland IS in North America, as is Alaska, and as the ice melts away from the north, entrepreneurs from China, Russia, and even the United States should at least ask for more rights from Denmark and Greenland with respect to its resources.

Ditto for Central and South America, by the way.

The United States under President Trump might be doing things all wrong with respect to Greenland, Guatemala, or any other nation when it comes to security and the economy, but ...

... if President Obama was in power, or if any other President were in power, wouldn't it be the JOB of that President to at least raise the issue?

Guatemala is a key ally with respect to its location and the need to stem the flow of refugees from the sad but true reality of failed nations aplenty to the south. We need Guatemala to either be economically strong and/or to militarily strong more than ever.

... or even as a potential territory owned and occupied by the United States. Because China is VERY interested in Central America, South America, and the Panama Canal.

Ditto for Greenland, which is economically and militarily viable and happy to remain autonomous...but Denmark legally CAN weigh in, and Greenland's own people CAN weigh in, if both China and Russia, and as well the United States, are increasingly interested in its resources.

Greenland WAS offered to be purchased by the United States in 1946 for $100 million ($1.3 billion in today's dollars). NO ONE would have cared any more than any bad dealings with Hawaii had we grabbed Greenland at that time.

And if it's a binary choice between China or the United States purchasing land on Greenland, then we damned well BETTER make it clear that China should own not a square inch of Greenland.

Which leads us again to today, in 2019. Greenland may not be for sale, but it IS strategically important.

Welcome to the 21st Century, folks. This ain't gonna be too pretty.