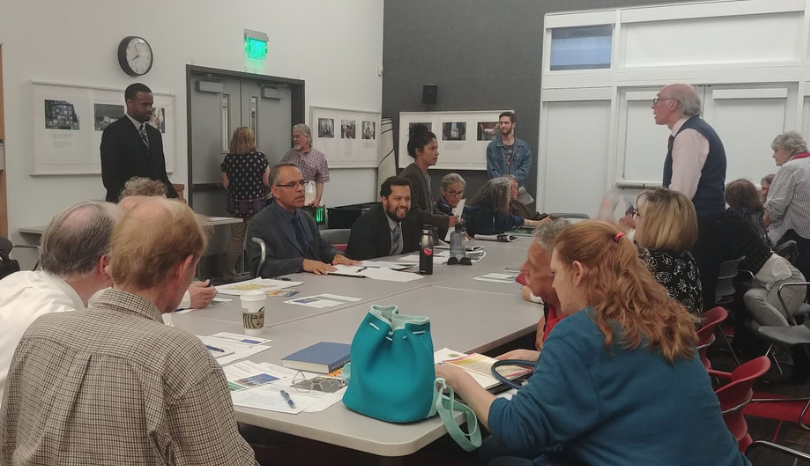 PLATKIN ON PLANNING-The Los Angeles City Charter, Sections 554-558,and the State of California’s planning laws require all cities and counties to have a General Plan.

According to LA’s Charter, a vast array of municipal actions must be consistent with the adopted General Plan. This includes all land use ordinances and regulations, private street regulations, public projects, and changes to any publicly controlled land. In addition, many land use decisions, such as amendments to zones and height districts, must also be consistent with the General Plan.

According to the State of California, every General Plan must be timely, internally consistent, and contain housing, open space, public safety, transportation, sound, conservation, and land use elements (chapters). The Land Use element is the best known, and in Los Angeles it is subdivided into 35 local Community Plans, hence the frequent mantra, “Update the Community Plans.”

Most of LA’s General Plan elements date back to the late 20th Century, and in the case of infrastructure, to the 1960s. In response to Measure S, the Neighborhood Integrity Initiative, the City Council directed the Department of City Planning to update LA’s 35 Community Plans within six years. Since only six Community Plans are current, that means that 29 Community Plan are either being prepared, considered for adoption, of will soon begin their update later this year on in 2020. By 2024, the entire process will be over, but then needs to start anew.

Ideally, the City should update the citywide General Plan elements before tackling local planning, but in LA, this process is in hibernation. This is why the City Council directed the City Planning Department to focus on quickly updating all 35 local plans.

A Community Plan Update Primer: To help these many communities, I have outlined basic steps local residents should take to ensure their concerns guide the update process. The alternative is to sit back, in which case non-residents, especially real estate developers scouting out quick profits, will play an outsized role in the Community Plan Update process. You can count on them and their operatives to show up at all meetings. More importantly, they will be glad-handing City Hall officials to get what they want, with Hollywood as their model.

The Update of the Hollywood Community Plan, overturned by the LA County Superior Court in 2012, remains the template for nearly 25 current or forthcoming updates. In the Hollywood case, 12-year-old census date created a false impression of an impending population boom. In addition, the vetoed plan failed to calculate the capacity of local zoning, infrastructure, and public services to handle a population increase. Similarly, the discarded plan did not inventory construction trends, vacancy rates, rents, and transportation behavior since 1988, when the City Council adopted the previous Hollywood Community Plan.

Instead, City Hall prepared the 2012 Hollywood Community Plan Update based on unwarranted assumption at odds with actual data.  The plan’s a priori approach was to up-zone commercial corridors and transit hubs, based on the myth that these zone changes would reduce driving and increase transit use. Because this myth has no basis in fact, the Superior Court rejected the adopted 2012 Update, its EIR, and its lengthy zoning ordinance.

Despite this total defeat in the courts, local communities should nevertheless expect that the same bogus planning principles will guide current Community Plan Updates.

How to proceed with a bottoms-up Community Plan -- a work in progress.

1) Monitoring. The first task of each local community is to carefully examine the adopted citywide General Plan elements, even though most are old. In particular, they should carefully review the General Plan Framework Element since it successfully fused and updated all previous General Plan Elements. Most importantly, it mandated detailed annual monitoring of the General Plan, which is absolutely key to successful plans.

“GROWTH MONITORING: After the Framework Element is adopted, the City will establish a growth monitoring program that will provide important information regarding the accuracy of future growth estimates and the distribution of that new development by community plan area. This monitoring program will annually document what has actually happened to the City's population levels, housing construction, employment levels, and the availability of public infrastructure and public services. Information on environmental conditions will also be monitored on a yearly basis to maintain and update an environmental database, which will be used to facilitate but not replace, environmental review for subsequent programs and projects in accordance with CEQA. . .

The information from such a monitoring system will be presented to the City Council in the form of an Annual Report on Growth and Infrastructure, which can be used as the basis for revision of policies as needed to meet the goals of the Framework Element. The status of environmental mitigation requirements can also be determined and policies can be changed if desired results are not being obtained. . .”

In order to accommodate changes in anticipated population growth, the Wilshire Community Plan has a theoretical maximum land use and population capacity greater than the projected development likely to occur during the Community Plan period. The Framework Element of the General Plan commits the Department of City Planning to develop a monitoring system and prepare an annual report on growth and infrastructure, to be submitted to the City Planning Commission, Mayor, and City Council.

In the fifth year following plan adoption (and every five years thereafter), the Director of Planning shall report to the Commission on the relationship between population, employment, housing growth, and plan capacities.   If growth has occurred faster than projected, a revised environmental impact analysis will be prepared and appropriate changes recommended to the community plan.   These plan and zoning changes shall be submitted to the Planning Commission, Mayor, and City Council, as specified in the Los Angeles Municipal Code.

The price of ignoring required monitoring is that Los Angeles is flying blind. To compound this failure, City Hall is sitting on much of this raw data, but has decided NOT to collect, interpret, and apply it. Nevertheless, much of this potential monitoring data is available on-line, and the rest can be culled from public databases, local surveys, and crowdsourcing. Since accurate and timely data on local conditions is essential for an effective, bottoms-up Community Plan update, local communities must assemble as much data as possible through their own efforts.

2) Zoning capacity, as measured in residential units and population, can be extrapolated from data already available online for each Community Plan. I will use my local Wilshire Community Plan, scheduled for updating in early 2020, as an example.

If you go to the on-line plan text, maps, and related documents, you will find a Summary Land Use table. This table lists all land in each Community Plan area by its plan designation, zone, and acreage. This provides the basic data for computing the number or potential residential units and population in case all privately owned were developed to its legal maximum. To assist you, the West Los Angeles Community Plan area developed an Excel spreadsheet that other communities can use as a template. Until this Excel spread sheet is available on-line, you can email me (rhplatkin@gmail.com) for a copy.

In the case of Wilshire Community Plan, the template reveals that if existing zoning were developed to its legal maximum, the area’s population would rise from a 2020 estimate of 303,000 to 573,000 people. f legal Accessory Dwelling Units and Density Bonuses were then factored in, the Wilshire Community Plan’s population would soar to 770,000 people – far beyond the capacity of the area’s old and frayed infrastructure.

Furthermore, the 2020 census is now underway. Initial data will be available by December 2020, and current data for each Community Plan area should be available shortly after that.

4) Demolition and construction data will be harder to generate because City Hall has flouted the General Plan Framework’s and Community Plans’ monitoring requirements. Therefore, unless local residents can compel the Department of Building and Safety to share its data, they have no choice but to undertake their own community surveys to determine demolition and construction activity since the previous Community Plan update.

5) Public Infrastructure and Services. Another critical variable will be the capacity of public infrastructure and services to support existing and forecast buildings and their residents, employees, and visitors. While these data are not easily found, extensive research by local community members should uncover most of it.

6) Transportation Behavior. A final factor, for which there is substantial on-line data, is bus and subway ridership. It reveals continuous ridership declines back to 1985 levels, especially in areas with new “transit oriented development.” ETRO’s system-wide and specific subway and bus line data is available at this link.

7) Local surveys and hearings. In addition to the above information, each cluster of Neighborhood Councils and residential associations can hold their own public hearing(s) to identify the most pressing concerns and proposals from a Community Plan’s residents. Since most Community Plans are large, more than one hearing will usually be necessary.

Finally, when the information from local residents is combined with community-wide data, local neighborhood councils and residential groups can make a full range of policy recommendations and implementation programs. For a format, they can carefully review their existing Community Plan, adding in new data, goals, and policies. In reviewing existing Community Plans, the land use map contained in each plan is critical. These maps include footnotes that control land use, and these footnotes can be amended to regulate critical local issues, such as density bonuses.

In all cases new categories related to the climate and housing crises should be added because they were not properly addressed in the old Community Plans.

What to be wary of. Since 1970, LA’s adopted long-term land use policy has been the concentration of new real estate projects on commercial corridors served by transit. In the abstract, this is a sensible policy. It allows Los Angeles to double its population and locate new residents and employees near transit, without any zone changes. But, the density hawks have opposed this adopted planning policy in the naïve belief that the best way to protect residential neighborhoods – whether single family homes, duplexes, and small apartment buildings – is to further up-zone commercial area.

These current density hawks imagine that with these zone changes in place, developers will simply overlook nearby and potentially profitable residential areas. But they are mistaken. Commercial up-zoning will not protect residential areas subject to gentrification, including McMansions that replace demolished single-family homes and duplexes, small lot subdivisions, and large apartment buildings that substitute for small ones. This is because these residential areas already have generous zoning, and new infill McMansions, small lot subdivisions, and apartment buildings are highly profitable.  Furthermore, when landlords cannot find tenants willing to shell out exorbitant rents for high amenity apartments, landlords rely on Airbnb to fill new, empty units.

Next steps. This primer is for local residents promoting a bottoms-up approach to the update of their Community Plans. It will improve with comments, so please let me know what should be changed or added.

(Dick Platkin is a former Los Angeles City Planning who reports on local planning controversies for CityWatchLA. He serves on the board of United Neighborhoods for Los Angeles (UN4LA) and welcome comments and corrections at rhplatkin@gmail.com.) Prepped for CityWatch by Linda Abrams.