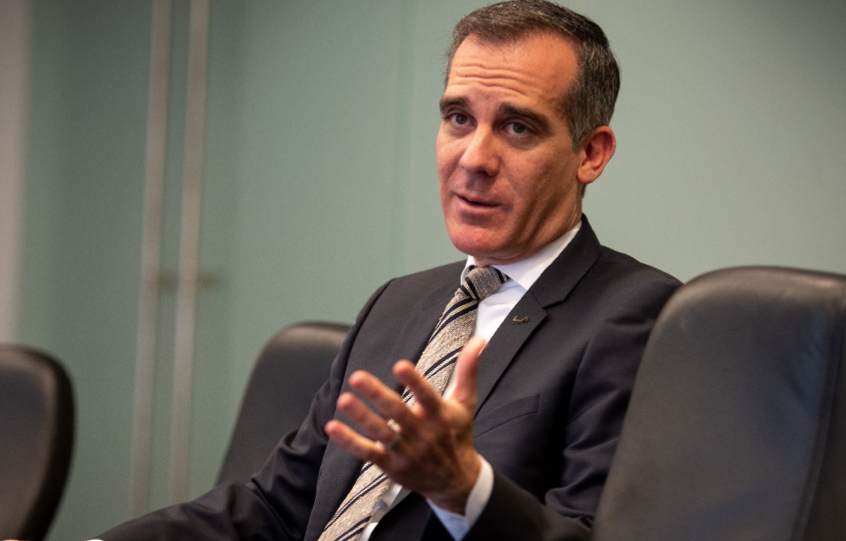 @THE GUSS REPORT-One of the more amusing things to happen as I write columns on Los Angeles’ political corruption was when Ana Guerrero, the chief of staff to Los Angeles Mayor Eric Garcetti, started telling people, “nobody reads Dan’s column.”

First, it’s amusing because Ana reads the column, often in the middle of the night. Second, because her boss sometimes reads it shortly thereafter, as shown in this screenshot. Just a coincidence, I’m sure. And third, it’s amusing because if nobody reads it, why is it a topic of discussion in the Mayor’s office?

With City Council returning this week after taking off the entire month of July despite a world of disgusting, fetid conditions on our streets that became international news, and after the FBI once again raided City Hall and the LADWP last week for something different than its raid last year on the disgraced, lecherous Councilmember Jose Huizar, let’s help the feds in these and other corruption pursuits.

For today, let’s just focus on a hidden email account Mayor Garcetti uses to shield his job-related activities and communications, which I discovered when digging through the very same public records that at least a few LA Times reporters had access to but have yet to use to ask why is Eric Garcetti using a private email account to hide public business?

Back on January 16, I submitted to the Mayor’s office, namely Garcetti and Guerrero, a public records request for all work-related content hidden in that email account, EricGarcetti@Yahoo.com. While the address is already a hidden nugget of public information, my public records request, as well as Garcetti’s lawyers’ responses, now pull it further into the bright light of day.

Specifically, my request was worded as follows:

I am submitting this Public Records Act request for all city-related emails sent to, or sent from, EricGarcetti@yahoo.com from January 1, 2016 to the present. In accordance with City green policies, you may send these to me in a single PDF via email within 30 days.

Since this is Eric's personal email account, it is not subject to redaction or withholding due to the "best interest of the city." Any effort to withhold or obscure the content will be dealt with accordingly, as I am already in possession of emails from this account.

My “green policies” reference was added because City Hall loves to attempt to charge a dime for each page of public records requested as a limp way to dissuade document requests. But with no paper, there’s no fee.

My last sentence, “. . . I am already in possession of emails from this account,” is there so that Garcetti’s taxpayer-salaried lawyers are on notice to not deny the existence of the account, which has also been tested through other avenues.

Also problematic for Team Garcetti is the question of which records do I already have in my possession? If they provided some records, but withheld others, they would be in a world of legal jeopardy and public relations hurt for failure to disclose.

Accordingly, for nearly 200 days now, Garcetti’s lawyers have kicked the can down the road five times, as you can see in this click-thru series of their responses.

So last week, five weeks after that latest blown deadline, by which time another delay letter was past due but never received, I again reached out to City Hall, including those taxpayer-salaried lawyers, and wrote:

Since you have failed to provide all the records, in fact any of the records, without redaction, and have failed to respond accordingly to my PRA related to Eric Garcetti's private email account, I am going to publish each of these dodgy responses in an upcoming column.

I am now offering you an opportunity to field live questions regarding your hiding public business in Mayor Garcetti's private email account. I will not accept prepared statements, or any further "delay" letters, for this column. This is strictly about an opportunity to field questions, and I will also not work through intermediaries speaking on your behalf.

This does not mean you are free from the public records request. I still fully expect that to be honored.

No siree, the Mayor’s office isn’t at all concerned about this column. . .

You see, Garcetti and his lapdog legal beagles know it takes money and opposing lawyers to make them sweat. Accordingly, I reached out to one of those organizations with lots of lawyers skilled in these things for help to get all these documents. It’s the kind of organization that – should it take on this matter – will eventually ask the courts to award them a massive amount of cash for taking on this issue, which is a matter of extreme public importance, namely the public’s right to know.

The FBI has a right to know, as well, and it is rumored that the federal government has a lot of taxpayer-salaried lawyers as well.

I’ll be here. And once we get this ball rolling, this column will start identifying the other politicians and agencies which have similarly stonewalled these requests and the public’s right to know about their activities as well.

But fear not, politicos and corrupti-crats; nobody reads this column at all.