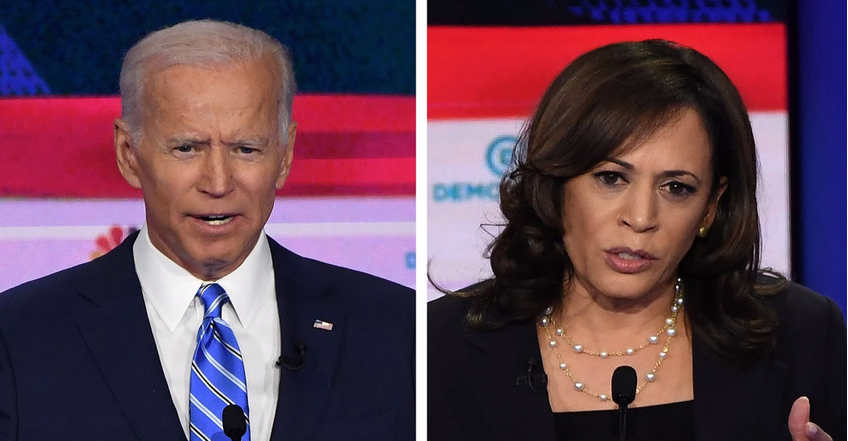 They don’t seem to be touting the result much, however — maybe because the survey also found that self-identified Democratic and Democratic-leaning voters overwhelmingly said Biden would be the best leaders and the strongest candidate against Donald Trump.

At least half of us are former academic pollsters, and we’ve always thought that Quinnipiac polling was pretty reliable. But maybe not.

Big error margin. For starters, we were taken aback to discover that the survey in question relied on respondents themselves to declare whether they’re registered to vote — without more sophisticated questioning or voting histories to substantiate their responses. There was no attempt to winnow likely voters. And the margin of error — +/- 5.7% — was relatively large, suggesting that some hefty weights must have been applied to the findings in order to state results from 519 Democratic or Democratic-leaning voters.  (With a random sample, we would have expected a MOE of +/- 4.3%.)

After some nagging, Quinnipiac supplied us with distributions from their sample that we requested. The survey included 47% men and 53% women – a reasonable division for California. But the sample was just 41% white and an unlikely 31% Latino and the distribution by age was heavy toward young voters and light toward older voters, given actual state voting history.

So, whether Harris has slightly eclipsed Biden among Democrats and independents who are likely to vote in the California primary, presumably in part because of how she smacked him around in the first debate, is less than clear. Very likely she moved up and Biden moved down, but by how much, we don’t really know.

Asked who they would vote for in the primary, 23% of self-identified Democrats and Democratic-leaning respondents chose Harris, compared to 21% who selected Biden — a statistical tie, given the MOE. That’s a 6-point increase for Harris from the 17% she had in the same poll in April and an 8-point drop from the 29% Biden had then, two weeks before he announced his candidacy.

Independent Sen. Bernie Sanders pulled 18% in the survey and Democratic Sen. Elizabeth Warren got 16%. The next closest competitor was South Bend Mayor Pete Buttigieg at 3%.

Take me to your leader. Obviously, in the aftermath of the first Democratic debate, in which Biden was pathetically unprepared, Harris wounded the former vice president among California voters. But if the issue is electability nationwide – Biden’s strongest argument – he still crushes the field, including the junior senator, among Californians. By that measure it’s Biden 45%, Sanders 12%, Harris 11% and Warren 8%.

And on the issue of who would be the best leader, it’s Biden 26%, Harris 18%, Sanders 17% and Warren 14%. When results are that disparate, as they are on the electability and leadership questions, margin of error is not really an issue.

Harris clearly has scored points against Biden and the rest of the field. But she’s got a long way to go to convince even her own supporters that she’s the strongest candidate to go up against Trump.

“But who do California Democrats pick as the best candidate to take on President Donald Trump?

If Harris were to be nominated, however, 68% of California Democrats say they would be excited, compared to 65% who say they’d be excited by a Warren candidacy, 58% excited by Biden and 55% excited by Sanders.

Quinnipiac surveyed 1,125 self-identified registered voters in English and Spanish depending on the respondent’s preference. To determine a respondent’s party, the survey asked an identification question – not a registration question: “Generally speaking, do you consider yourself a Republican, a Democrat, an independent or what?” The results were Republican, 25% (compared to 24% in the California voter file), Democrat 37% (compared to 43% in actual fact) and independent 24% (compared to the Secretary of State’s 28%).

Who’s really a voter? Some random digit dial (RDD) surveys of adult households ask the respondent a better question that is intentionally loaded to encourage respondents not to lie about whether they are actual voters such as: “Are you registered to vote in your precinct or have you moved or haven’t you had time to get around to registering to vote?” The idea is to give a respondent an out to say he or she is not actually registered to vote without feeling like a civic slacker.

Having asked party ID and not registration, Quinnipiac weighted the survey to U.S. Census data, not to the actual voter file (hence the disparity with the Secretary of State’s numbers). That’s a standard practice by national pollsters (since registration data are not available in every state), but as one top California pollster told us, voter ID “has nothing to do with registration.” Which is why credible California pollsters either work from the state’s voter list or ask more sophisticated questions in an RDD survey to determine who is an actual voter and what party they’re registered in.

Bottom line: We’re convinced Harris is stronger and Biden is weaker in California. But also, that Californians still consider Biden the better candidate against Trump. At least until the next debate.