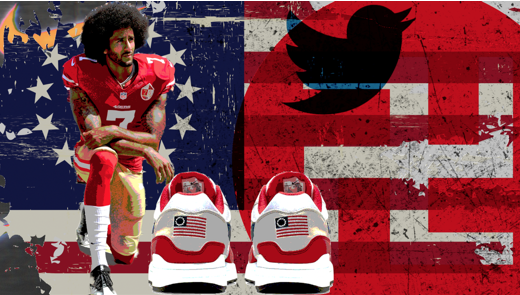 NEW GEOGRAPHY--It would be comforting if Nike’s decision to ditch its “Betsy Ross” flag sneakers at the behest of former NFL quarterback and social justice warrior Colin Kaepernick was exceptional, but, sadly, it is not.

Increasingly, many of our most powerful companies eagerly kowtow to the purveyors of political correctness — such as those who compared the revolutionary banner to the Nazi swastika flag or that of the Confederacy.

Such “corporate vigilantism” is particularly dangerous when, according to one recent survey, upwards of two-thirds of top CEOs see their responsibility is to shape society, as opposed, say, meeting simply the needs of shareholders. Such thinking is particularly widespread among those companies — the five tech giants that now constitute the world’s five wealthiest companies — who dominate and in some cases, exercise near monopoly control of key markets.

With near monopoly status, these firms, as tech entrepreneur Peter Thiel notes, don’t have to “worry about competing with anyone” or alienating customers. Such lofty positioning encourages firms like Google, as a new article in American Affairs suggests, to rig the algorithms that control search to favor not just their commercial interests but also their ideological predilections. Firms such as Facebook and Twitter also openly engage in “de-platforming” conservative and other groups who offend their ideological sympathies.

The gentrification of the left

In the 20th century most business leaders were predictably conservative. Big money aligned with their class allies in the “party of property,” and some of those elements still back Donald Trump and conservative causes. Left-wing politics were left to their unions, academics and parts of the media.

But over the last twenty years most of the oligarchy — whose firms are overwhelmingly non-union — have embraced the progressive social and environmental agenda. The clear majority of wealthy donors support the Democratic Party while vast majority of the ultra-rich foundations — funded by the offspring of the Rockefellers and the Fords based on fossil fuels — now all tilt well to the left.

So deep-seated is gentry progressivism that a company like Nike quickly sides with a mediocre NFL quarterback who has worn socks showing police as pigs over an iconic image from the country’s founding. This could be one way that company, which relies on low-wage, largely un-unionized foreign labor in what the Baltimore Sun called “abysmal working conditions,” can sell itself as politically correct.

Part of the new corporate ethos is uncompromising social progressivism. In the industrial era ruling classes paid at least lip service to the primacy of the family, but today’s hegemons often demonstrate as little use for the traditional family and religion as they do for patriotism.

Gillette, the razor company, for example, has produced ads that attack “toxic masculinity.” Similarly culturally PC approaches have been adopted by firms such as Audi, Procter and Gamble, Apple and Pepsi. Today employees at Google, Microsoft and Accenture in Britain must ascribe only to the progressive social orthodoxy; if they fail to do so, many fear they may find themselves unable to move up and can even be fired.

The corporate emphasis on cultural issues serves to give ”street cred” to the ultra-wealthy but threatens to widen the gap between the corporate elite and those who still identify with the old values of family, centrality the nation state, and religion. Allowing biological males to use women’s restrooms — a position embraced passionately by leading corporations — is rejected by two-thirds or more of the population. Colorado Gov. Jared Polis, a tech mogul, has backed sex education in public schools that essentially bans any talk of gender norms; it’s likely few parents embrace the fashion of raising their children without acknowledging what is for the vast majority their biological reality.

Wokeness, backlash to which helped elect Donald Trump, also could soon turn against the corporate elite itself. Like the Catholic Church during the Middle Ages or the Communist Party in China in the 1960s, the gentry-funded left is spawning extreme cults. Modern day “children’s crusades” rise naturally from often hysterical notions about climate change and social justice promoted by the oligarchs’ in their media outlets and pronouncements. At some point these radicalized young people will rebel against “the clean rich” who live on large estates, collect fancy cars and fly private jets while asking everyone else to downsize and check their “privilege.”

Tech workers, who tend to tilt left, also could prove critical in financing candidates such as Elizabeth Warren and Bernie Sanders whose goal is to drain their boss’ vast wealth. The moguls also could end up with Washington setting standards as to who can sit on their boards, another headache worse than those suffered during the chaotic Trump years.

This seems oddly reminiscent of China’s efforts to control and monitor thoughts, sometimes assisted by U.S. tech firms. Libertarian ideologues may see something different since these companies are not part of the state, but Google already functions as a “state within the state,” creating what is calls “machine learning fairness” that will produce the proper ideological results.

Whatever the fate of the moguls themselves, the woke corporation challenges both to our democracy and the future free thought. Rather than surrender control of information to these self-appointed curators, we must answer the old Latin phrase quis custodiet custodes — who watches the watchers? Be it by regulation, taxation or anti-trust, there needs to be a response, before the woke oligarchs and their allies take all such thoughts off the net and beyond respectable conversation.