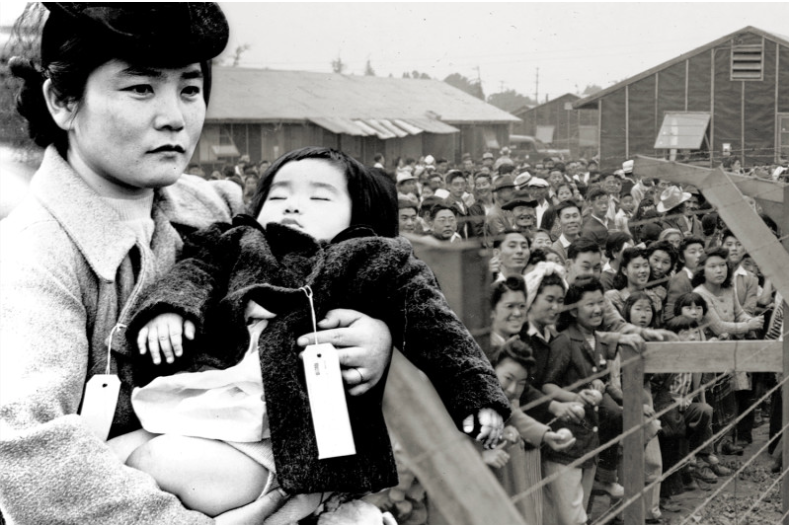 VIEW FROM HERE--As much as I am personally sickened by President Trump's handling of the border crisis, historically speaking, his draconian policies are far from unprecedented.

The first substantial U.S. detention program began in 1838 under the auspices of President Martin Van Buren, who ordered the U.S. Army to enforce the Treaty of New Echota (essentially an Indian removal treaty). Marshaling the manpower of over 7,000 soldiers, General Winfield Scott was charged with evicting the Cherokee nation from their tribal lands in the south and forcing them to trek 1,200 miles west to reservations in Oklahoma. Before the men, women, and children were sent on the "Trail of Tears", they were detained in six detention centers called "emigration depots." These forts existed in North Carolina, as well as Chattanooga, Tennessee and Fort Payne, Alabama.

During the American Civil War, thousands of freed slaves from the plantations were recaptured by the Union army and put into hard labor camps. Women and children were locked away in these camps and left to die from starvation and smallpox. According to some researchers, over 20,000 emancipated slaves were killed in these makeshift concentration camps. (The most infamous of these was established in Natchez, Mississippi and was called the Devil's Punchbowl because it was located at the bottom of a cavernous pit with trees located on the bluffs above.)

Nearly a half-century later, at the apex of the First World War, President Woodrow Wilson, fearing the subversive potential of Germans and German Americans, set up two internment camps in Hot Springs, N.C., and Fort Oglethorpe, Georgia. Codifying the president’s fears, Attorney General A. Mitchell Palmer decreed that "All aliens interned by the government are regarded as enemies, and their property is treated accordingly."

After the bombing of Pearl Harbor, this official policy of exclusion was expanded to target Japanese and Americans of Japanese descent. Franklin D. Roosevelt issued Executive Order 9066 on February 19, 1942, which allowed the military to designate areas "from which any or all persons may be excluded." The groundwork for this Executive Order was firmly planted when the 1940 census introduced a new question. It required that all respondents include their ethnicity. Also in 1940, a new law was passed so that all aliens over the age of 14 had to be registered.

These extreme measures were followed by perhaps the single most unconstitutional order ever delivered in our nation’s history, namely, the Emergency Detention Act of 1950. Otherwise known as the McCarran Internal  Security Act, this provision authorized the construction of six concentration camps in 1952 in the event that the U.S. government declare a state of emergency. Rather than Indians, Germans, and the Japanese, these camps were intended to hold communists, anti-war activists, and other dissidents. Among other disturbing components, the Act required that the President, in an emergency, assume the right to arrest and detain persons who he believed might engage in espionage or sabotage. It also created a Subversive Activities Control Board (SACB) to effectively monitor the finances and activities of millions of Americans.

More recently, in 2002, the United States government, in response to the threat of global terrorism, opened up the Guantanamo Bay Detention Center in Cuba and the Bagram Theater Internment Facility in Afghanistan. As is know known due to the brave reporting of Amnesty International, the International Committee of the Red Cross, and the New York Times, these facilities were the site of cruelty "tantamount to torture." Amnesty International even referred to Guantanamo Bay as 'the Gulag of our times.'

Sadly, this is an incomplete list of the detention centers that have been built and used in the United States. This list doesn't even include what happened to the Navajo; what took place in Batangas during the Spanish American War in 1901; the horror of Abu Ghraib and the many U.S. operated black op prisons which exist in countries all over the world; nor does it address the 400 year system of slavery in the Americas.

So this is my point. Rather than an isolated case of systemic abuse and confinement, the migrant detention facilities on the U.S. southern border are carrying on a brutal legacy of fear, prejudice, and exclusion that began with the forced removal of Native Americans in the first part of the 19th century. Rather than being an exceptional and unparalleled architect of moral barbarism, President Trump is merely following in the footsteps of his predecessors (in some cases leaders of tremendous historical acclamation such as FDR and Woodrow Wilson).

Does this fact make what Trump is doing right? Not at all. Does it make the unsanitary and unnecessary detention of migrant children justifiable? Absolutely not. But it does put this whole travesty in context. There is a reason that this evil has persisted as long as it has on the border. There is a reason that these conditions persist in the face of deafening condemnation. Americans (white Americans especially) and not just Trump and his base-are far too comfortable with confinement and abuse as a solution to confronting the challenge posed by the human rights of the other. The same reason the majority of white America accepted the removal of Native Americans from Georgia and North Carolina, is the same reason the majority of Americans are indifferent to the plight of Honduran and Salvadoran children. I wonder how different things would be if we all embraced the words of a real American hero. It was Thomas Paine who once wrote, "Whatever is my right as a man is also the right of another."