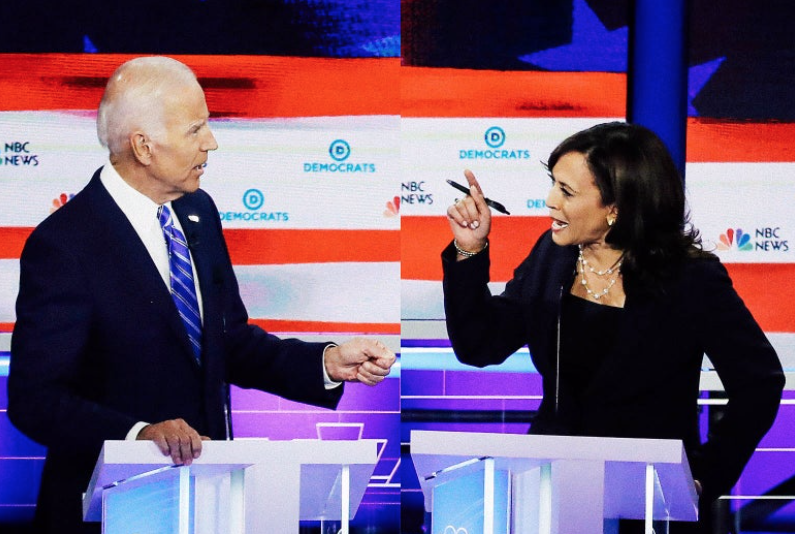 The 2020 presidential election is about three states — Wisconsin, Michigan and Pennsylvania.

And for every lefty hipster lighting up the Twitterverse with joyful, if thoroughly ageist, denunciations of Joe Biden, it’s worth remembering yet again that the campaign is not a national popular vote but 50 state elections – and asking a crucial question raised by NBC’s First Read:

“Can a private-insurance-eliminating, decriminalizing-border-crossings Democrat win outside of California and New York?”

To which, we also wonder, how would Harris fare if Donald Trump attacks her (accurately) for proposing to punish parents of truant school children while opposing the death penalty for a cop killer?

If you thought Willie Horton was hard for Michael Dukakis to handle, wait until you see how Trump reminds voters of Harris’s actual position on sentencing for David Hill, who gunned down San Francisco Police Officer Isaac Espinoza with an AK-47 in 2004.

And at some point, her handling of sexual abuses cases by Catholic priests will also become fodder because it is so well documented by first-rate reporters like Mike Rezendes. She says she knows how to go after sexual predators (like Trump) except she didn’t when she was San Francisco DA and California AG.

Her refusal, when running for Attorney General, to support ordering the FBI to break into a terrorist’s I-Phone (or to oppose it on privacy or free speech grounds) is just another area where she has yet to be attacked because she’s never faced a slash-and-burn candidate from the law-and-order right.

And as for “prosecuting” the case against Trump – which seems such a fashionable concept – what makes anyone believe that Trump would agree to debate anyone?

There’s nothing that can force him into a debate and if he doesn’t think it’s to his advantage, why would he?

For Harris, going forward, the key will be whether she makes inroads with blacks (especially black women), whose votes are critical in winning the Democratic nomination and bolstering the base vote in the general. Beyond that measure, however, it’s not necessarily the third deck home run it looks like at first glance because:

– Older voters may be uncomfortable with her personal attack – and ambivalent about how they felt about busing 50 years ago too.

– Kamala still can’t get her story straight about health care.

That she can perform well in a debate now is quite clear. But after watching Harris in action for more than a decade, as we’ve said before, we still can’t say she has a clear set of principles and convictions. And we wonder about the wisdom of her attacking Biden on the issue of school busing which was never popular among whites or blacks.

In fact, re-litigating school busing from the 1960s and ‘70s is a dangerous game for Democrats. Forcing candidates to support open borders and gun confiscation is madness. None of the pie-in-the-sky proposals Democrats would like to accomplish will be possible unless they first defeat Trump and take the U.S. Senate.

As our old friend Steve Twomey put it on Facebook the other day: “After hearing from 20 Democrats, who somehow think this election is about ending private health insurance, more liberal borders, registering guns and school busing, I’d say the 45th president is closer than ever to a second term.”

We don’t know if Joe Biden can run a vigorous and smart campaign. We know Barack Obama chose him, vetted him and kept him on for two full terms. That’s not chopped liver. But Biden is certainly capable of rendering it so.

(Jerry Roberts is a California journalist who writes, blogs and hosts a TV talk show about politics, policy and media. Phil Trounstine is the former political editor of the San Jose Mercury News, former communications director for California Gov. Gray Davis and was the founder and director of the Survey and Policy Research Institute at San Jose State University. This piece appeared originally in CalBuzz.)  Prepped for CityWatch by Linda Abrams.