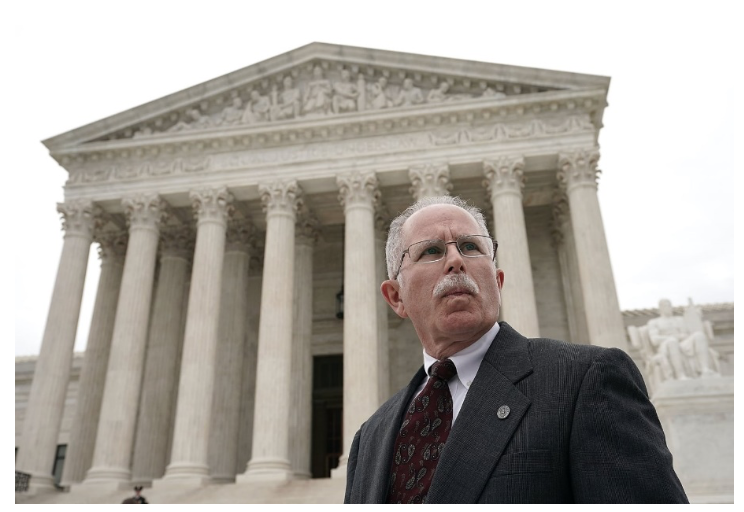 UNION POLITICS--Janus got the superhero treatment during a June 27 gathering of the conservative faithful at a meeting space in downtown Los Angeles’ Wells Fargo Building. At a conference dubbed The Janus Victory:

One Year Later, onetime California governor Pete Wilson introduced the former Illinois child-support specialist as a Superman of the right whose action could bring the red back to blue California.

It could also bring back the kind of economic winter not seen by American workers since before the New Deal. But the 66-year-old Janus looked more like a gray-haired Clark Kent as he stuck close to a set of talking points, crediting his dad and the Boy Scouts for teaching him to finish what he’d started. Janus was the plaintiff in a landmark anti-union lawsuit brought by the National Right to Work Legal Defense Foundation and the Liberty Justice Center, in which the U.S. Supreme Court decided against organized labor. (Photo above: Mark Janus in front of the U.S. Supreme Court.  Alex Wong/Getty Images)

Janus v. AFSCME was a major victory for the political right, which had claimed the American Federation of State, County and Municipal Employees’ requirement that Janus pay representation fees (these are different from union dues, which Janus did not pay) to AFSCME infringed on his free speech rights. Today, after the court’s 5-4 decision, public servants who don’t want to belong to their unions no longer have to pay such fees – even though the unions negotiate wages and working conditions on their behalf. Union treasuries seem somewhat diminished by the ruling, but workers have not abandoned their unions en masse, at least so far. The future is less certain, as pro-Janus forces plan an onslaught of well-funded efforts to lure public employees away from their unions.

On the one-year anniversary of his victory, Janus, now a senior fellow at the Liberty Justice Institute, told Capital & Main that he’s working full-time to spread the word of his win.

“I’ve already made the fight, took it all the way to the Supreme Court, got the affirmative decision, so now why not continue the fight to let people know what their rights are and let them decide for themselves,” Janus told about 80 people who skewed far older and whiter than the state as a whole. Among them was a smattering of local Orange County elected officials – along with former Orange County public school teacher Rebecca Friedrichs, who was promoting a 2018 book on her near-victory before the Supreme Court. (The court deadlocked on her case, which was nearly identical to Mark Janus’, in 2016, after the death of Justice Antonin Scalia.)

“We deprived unions of hundreds of millions of dollars from people who didn’t want to participate. It’s an incredible accomplishment. But we had to learn and understand the legal and political landscape in non-right-to-work states,” Messenger told the group. “We’re seeing resistance.”

Still, unions have so far weathered the Janus storm.

“Overall, if we see the goal of Janus as weakening public sector unions, it has not succeeded to date,” says Ken Jacobs, chair of the University of California, Berkeley, Labor Center. Jacobs cites the 2019 teacher strikes in Los Angeles and Oakland as evidence of the effectiveness of public employee unions, post-Janus.

Still, large public-sector unions have lost revenue, Jacobs concedes, even as they’ve increased their memberships, because increases in dues haven’t made up for the loss of non-member representation fees.

At stake, Jacobs says, is whether unions “can counterbalance corporate power in America” to help protect public services.

INDEED, THE WAR FOR THE HEARTS AND MINDS of union members is just beginning. Leading the effort to separate workers from their unions is the State Policy Network, a consortium of more than 60 conservative and libertarian-leaning think tanks spread across the country. The groups’ combined revenue had reached $80 million by 2014, SPN president and CEO Tracie Sharp told the Wall Street Journal in 2016. SPN affiliates champion small government and expanding charter schools, and have campaigned against the Affordable Care Act and the expansion of Medicaid. The groups see unions and the progressive elected officials they support as obstacles to implementing their agenda, according to SPN internal documents.

“Government unions remain freedom’s most well-funded and deeply entrenched opponent,” read a July 2018 fundraising appeal Sharp wrote, which was obtained by the Intercept. “They are one of the largest special interest groups in the country, spending more than $1.7 billion each election cycle and blocking any and all reforms that don’t serve to expand Big Government.”

“Many people consider California to be front and center in this fight,” Tim Snowball, an attorney with the conservative, Sacramento-based Pacific Legal Foundation, told Capital & Main following the meeting. Snowball, who also spoke at the conference, said that the sheer volume of public employee union members – one-third of unionized public employees in the U.S. live in California – makes the state an attractive target.

Until now, SPN has had a fairly small footprint in blue California, but the Janus decision means it and groups like it have a chance to make inroads in the state.

The Orange County-based California Policy Center, which organized the June 27 event, has seen its budget grow steadily in recent years, nearly doubling its revenues between 2015 and 2017, the last year for which data is available.

The CPC is among several SPN affiliates that have pledged to reach out directly to public servants. It has launched websites that offer workers specific instructions on how to drop their union memberships. The group’s optouttoday.com/utla website is specifically aimed at Los Angeles Unified School District teachers. Other groups include the following:

The real power of these organizations lies not in the size of their memberships, or in their direct outreach to workers, but in their deep-pocketed libertarian donors like the Koch brothers and the Bradley Foundation, along with a long-term legal strategy to pursue hundreds of lawsuits in hopes one might eventually reach the Supreme Court where, like Janus, it could deal another blow to unions.

“It’s possible to recover hundreds of millions of dollars across the country,” Messenger said of lawsuits that demand retroactive refunds of back representation fees. Mark Janus filed such a case in Illinois, where he could recover two years’ worth of payments, Messenger said. (A District Court judge ruled against Janus, but his case is currently being considered by the Seventh Circuit Court of Appeals.) Some states have longer statutes of limitations, like Missouri’s at three years or Maryland’s at five.

“If you target the correct class in a state with a lengthy statute of limitations, it could be another Janus moment,” Messenger told his listeners, adding that 48 such lawsuits have been filed in courts around the country.

SO FAR, THOSE COURTS HAVE LARGELY SIDED WITH UNIONS, crediting their arguments that they collected representation fees legally, had spent the money and did so in good faith, not knowing that they could be liable for it later. One Minnesota college professor argued that Janus means that it’s unconstitutional for unions to have the exclusive right to represent workers, a hard-won right that gives unions bargaining power in a workplace. The case, Uradnik v. Inter-Faculty Association, was appealed to the Supreme Court, which declined to hear it last April.

But Messenger and his colleagues seem undaunted by such setbacks. The high court will likely eventually step in if two circuit courts of appeal disagree on a similar question, he said.

Challenges are also likely to be made against California laws that allow unions exclusive access to new worker orientations and to contact information; that require union members to deal directly with unions, not employers, when canceling or requesting dues deductions; and that bar employers from discouraging union membership.

The barrage of lawsuits—successful or not – forces unions to spend money to defend themselves. But the specter of another Supreme Court battle presents a greater threat, notes the Labor Center’s Jacobs.

“The nature of this court and its hostility to unions, and willingness to interpret law in wildly different ways when it comes to unions instead of corporations,” he says, “raises lots of questions,” adding that it’s still an open question whether union memberships will decline over time.

(This piece was posted originally at Capital and Main.)