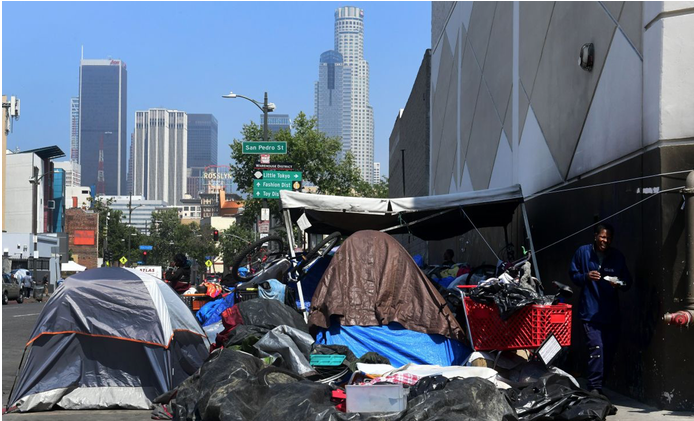 ONE MAN’S OPINION-If robbers invade your home and steal your jewelry, the criminals are at fault.

But when you open the door to criminals, give them your bank books with passwords, urge them to take your credit cards and charge whatever they want, then co-sign on loans for their benefit, then as they leave they steal your dog and urinate on your rugs, it’s NOT the criminals’ fault.

Under Garcetti, whose first term began in 2001, Los Angeles traffic has gone from very bad to the worst in the nation to the worst in the world. We spent over $1 billion to widen the 405 Freeway from the Valley to the Westside, but the congestion on that portion of the 405 is worse.

Of course, it’s worse. Whose fault is that? The liars who told the public that if they greatly increase density in the Basin, fewer people would commute from the Valley to the Westside? Blaming the liars like Pravda West (LA Times) and Garcetti’s minions of deception is like blaming the home invasion robbers after you’ve opened your front door, made tea and cookies for them and insisted that they clean your bank account. There comes a time when we cannot blame the criminals anymore.

We the People need to admit that We the People are to blame when we believe that by greatly increasing the density of offices south of the Sepulveda Pass, fewer people will be coming over the Pass each morning. What in the world did people think would happen with the extreme densification of Century City, Westwood, West LA and Santa Monica? That Scotty would beam people from Van Nuys to Westwood?

Again, it is We the People who are at fault.

NewGeography has been regularly publishing the true situation, but We the People prefer to believe obvious liars and myths. In Jan 2014, Judge Allan J. Goodman ruled that the city intentionally used “fatally flawed data and wishful thinking” to the extent that it subverted the law – yes, in layman’s terms, “Garcetti uses Lies and Myths.” (Soon thereafter, Judge Goodman was not on the bench and judicial corruption to protect Garcetti and the developers went into warp-drive, but that’s another story.)

The Real Data is Not Secret

The USC’s Price School of Public Policy has been advising for over a decade that Los Angeles’ growth is slowing. The data shows no upward pressure on housing prices by any increase in the home buying market. Not only is NewGeography correct that the city constantly lies about the four million population ceiling being busted, but our tiny increase in population contributes zero to housing demand.

More domestic-born Millennials are leaving Los Angeles than are coming into LA. Family Millennials are the prime home buying segment of the population. The reason LA sees any population increase -- even as small as 21/100 of 1% -- is due to births and lack of deaths. Newborns do not buy houses or rent apartments. Thus, a population increase does not mean an increase demand for houses or apartments. Baby Boomers, who do not die as fast as the prior generations already have homes; they are not out there buying new homes or renting apartments. The Big Lie is that we have not built enough apartments and new homes. (Housing prices and rents are increasing due to a variety of criminal frauds which are speared-headed by a City Hall that is protected by morally bankrupt judges.)

We the People Have the Duty to Ask Basic Questions

We the People are the ones who are so foolish as to not ask why we had a 16% increase in homelessness in one year when the population increased only 21/100th of 1%. Don’t look to “Pravda West” for the answer.

Why has traffic gotten worse than the worst? Why has homelessness increased 76 times faster than the population increase in the last year? People who do not ask these questions will find rats with their fleas and diseases invading their homes. Should we blame the rats who know enough to flee DTLA for the Valley or do we blame the people in the Valley who insist on voting for criminals?

The City of Los Angeles Is a Criminal Enterprise

The fact that Judge Richard Fruin protects the criminals only shows how extremely dysfunctional our city has become. Don’t think that District Attorney Jackie Lacey is going to do anything to stop the multi-billion corruption. We know the connection between the criminal City Council (whose Vote Trading Bribery Agreement openly violates Penal Code § 86 each time it is in session) and the rats, fleas, typhus, MRSA, etc. Each time the city has been asked to destroy rent-controlled housing, the City Council has voted unanimously to destroy the housing. When you live on $1,000 per month and your $450 apartment is destroyed so that a billionaire can build market rate housing, where are you going to live? Answer? The streets.

Garcetti’s Manhattanization Mania has been designed to funnel hundreds of billions to the 1% by targeting rent-controlled units for destruction. That is why people are suffering and dying on the streets and why Pravda West continues with its obnoxious lie that the solution is to give more money to the City Hall criminals.

In 2018, enough rent-controlled housing was destroyed to house 4,500 people. Yet, We the People are too dumb to figure out the connection between the destruction of RSO units, homelessness, rats, and toddlers living on the streets. Instead, We the People mouth the most absurd claim that we need to give $1.2 billion to the people who tore down the rent-controlled housing to build more market rate housing. Interestingly, the RSO destruction added 15% to the homeless population (4,500 is 15% of 30,000). If we had stopped the destruction of RSO for 2018, 4,500 more poor people would have homes and we would have had zero growth in homelessness.

Here’s the pattern which We the People insist on supporting:

3) The rats will increase. Garcetti will make certain there are no hygiene facilities for the poor, but he’ll chase them out of photo-op-rich DTLA

4) The homeless will migrant to nicer parts of the city, following the freeways. As human feces, trash and rotting food accumulate in your area, flea infested rats will be in your backyard and your cats and dogs will bring typhus, typhoid fever, and MRSA into your house. The disease list is longer: rats are vectors for Lyme disease, Rocky Mountain spotted fever, Toxoplasma, Bartonella, Leptospira and other microorganisms such as sapoviruses, cardio viruses, kobu-viruses, parechoviruses, rotaviruses, and hepaciviruses.

5) A rat’s life span is six to 24 months, but each female can produce 84 pups per year, and each reaches reproductive age at five weeks. Thus, after 1,000 homeless people are chased out of Skid Row for Garcetti’s photo-ops, you can expect a 100 or more of these people to relocate near your home if you’re near a freeway. Within one day, your local rats will know about the new food source. If each homeless person attracts one rat, that means over 8,000 new rats from that one rat. But remember, within five weeks of the first litter, each baby female can start having her 84 babies per year. With 100 homeless people, that’s 800,000 rats from a one to one ratio. The reality is far above one million since rats begin breeding at five weeks of age.

2) Photos of rats turn up on TV ads with rats next to Garcetti and piles of trash and human feces.

3) Garcetti runs the homeless out of DTLA.

4) The homeless move to more secluded spots on the Westside and the Valleys.

6) Wherever the homeless are chased, more rats will appear.

7) The Westside and the Valleys will have an explosion of rats. Adults and children, in addition to police officers, will contract a host of rat-born illnesses.

8) Garcetti will call for more dense construction which will begin with the destruction of more rent- controlled housing, and that will intensify the homelessness-rat-flea-disease cycle.

All this information is readily available; so, it is We the People who are to blame.