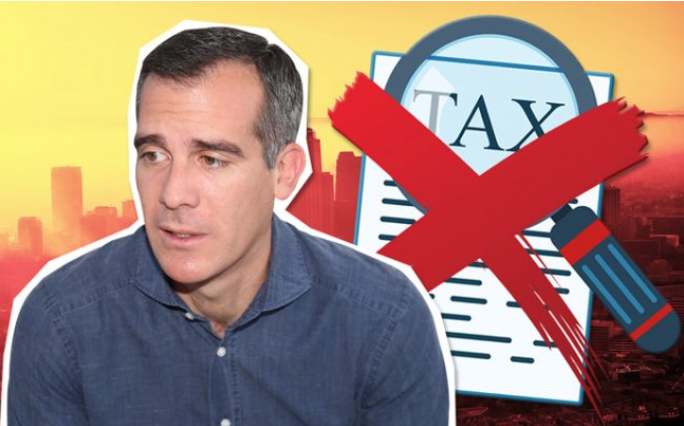 @THE GUSS REPORT-There was plenty of schadenfreude last week as LA Mayor Eric Garcetti’s and the LA Times’ beloved Measure EE not only failed to get the needed 67% of votes to pass, it didn’t even get a 50%+ 1 vote majority.

That’s because people finally stopped trusting both the paper and the mayor.

Garcetti later choked up at a press conference as sycophants gave him scant courtesy claps for his failed effort, like proverbial Little League trophies for kids who finished last. When did the guy ever choke up about our homeless crisis, immigration caravans, the killing of thousands of homeless animals in his LA Animal Services impounds…or anything else?

The EE billions weren’t going to help LAUSD, as new school board member (and former LA City Councilmember) Jackie Goldberg essentially confirmed. It would have disappeared into massive pools flowing to bloated state and local pension obligations that should never have been made in the first place.

Last week’s vote was the first in the City of Los Angeles where the almost 37-year old Justin Wesson, the “floor director” of LA City Council, wasn’t living with his mommy and daddy, at least according to voter registration information.

According to those records, Wesson, born in 1982, lived with his parents at their Bedford Avenue address from August 16, 2000 to May 17, 2007 and at their Virginia Road address from May 19, 2008 to October 10, 2018. Just hours before I obtained those records from LA County Registrar-Recorder Dean C. Logan, Wesson, the son of LA City Council president Herb Wesson, suddenly changed his residency claim. How did that happen, Mr. Logan?

If that’s not true, he committed as many as 21 counts of voter fraud by driving to his parents’ polling station 19 miles from where his now-spouse and baby live. He didn’t “accidentally” vote by mail. He presumably did it to falsely establish residency to run for his dad’s office.

We will keep beating this drum until the senior Wesson’s opponents in the upcoming race to replace Mark Ridley-Thomas on the LA County Board of Supervisors raise the issue of voter fraud, not just by the son but by the father as well. In June 2005, Herb Wesson repeatedly swore under penalty of perjury that he lived on Roberts Avenue in Culver City and on W. Adams Avenue and Citrus Avenue in LA (all within one month, including his cousin Anita Thomas’s address) to establish “residency” to run for LA City Council without actually domiciling here.

LA Times Says We are Ashamed of Ourselves

LA Times columnist Nita Lelyveld last week published a piece in which she insists we are ashamed of ourselves for the worse-than-ever homeless crisis in a piece titled, “The homeless make us ashamed and angry — at our city and at ourselves.”

In an informal social media exchange, I asked her to quantify how many people outside of the local political and media sphere she queried to determine our level of self-shame.

She wrote that people are angry at politicians. Yes, no kidding, but what about the self-shame, Nita?

I reiterated, “Is that a zero? Five? 25? How many people outside of politics and the media told you that they are ashamed of themselves for LA’s homelessness?” She never replied, making it plausible to conclude she didn’t hear it from anyone.

Such intellectual dishonesty caused the Times’ circulation to sink to roughly 600,000. With nearly 24 million people in Southern California, its print circulation reaches just 2.5% of SoCal. And with a 2017 digital subscriber base of just 105,000, the Times reaches fewer and fewer people who aren’t in politics, the media or the print edition-loving elderly.

With the embarrassing goings on last week, LA City Council had to find something else to tout, so they migrated to gun violence.

Councilmembers Paul Koretz and Mitch O’Farrell rolled out their McCarthyist idea of forcing people to choose between doing business with the city or the NRA. That’ll fail just as their travel ban to Arizona failed, as did its efforts to not hire contractors engaged in the building of the southern border.

Last week, Koretz’s flunky who dodged recent questions about a decapitated pig’s head being used as a City Hall “decoration” sent me a link to a USA Today column about Chicago gun deaths adding, “Councilmember Koretz will still discuss gun violence with you.”

That is, until I sent her the topics:

I wrote, “I'm not challenging the (Chicago gun death) statistic at all….My questions will be around the fact that Illinois in particular has arguably the stiffest gun laws in the country, and with this latest deadly result, the correlation is that gun violence has nothing to do with strict gun laws. Chicago also has a much higher gun recovery rate than Los Angeles.”

Koretz also came up with a nutty idea last week to outlaw car idling for more than a few minutes. He apparently hasn’t considered cars idling for health and safety reasons, such as heated seats keeping stiff backs (like mine) warm, or children, the elderly or animals who need vehicle air conditioning during warm and hot months. That is all anyone will need to claim to defeat idling citations, should they ever be issued.

And talk about whining…

Councilmember Mike Bonin bemoaned how Culver City kept homeless encampments off of its side of Venice Blvd, as they migrated toward his side of the city limit. It’s because Culver City serves its constituents better than Bonin and the rest of City Hall serve us. It’s called effectiveness.

Finally, Pathetic Image of the Week

Did you see Garcetti’s pathetic press conference on DTLA’s notoriously filthy Ceres Avenue? It was held with his podium in the middle of the not-yet-disinfected street with a trash truck disingenuously positioned in the background because he is no longer trusted (thanks in part to KNBC’s Joel Grover) to tidy-up as he promised. Garcetti wants to prosecute businesses who hire the homeless to dump trash there, but not the homeless who actually do it. No word on whether the podium was disinfected before being returned to City Hall.

There’s so much more to tell you. Have a great week.

(Daniel Guss, MBA, is a member of the Los Angeles Press Club, and has contributed to CityWatch, KFI AM-640, Huffington Post, Los Angeles Times, Los Angeles Daily News, Los Angeles Magazine, Movieline Magazine, Emmy Magazine, Los Angeles Business Journal and elsewhere. Follow him on Twitter @TheGussReport. His opinions are his own and do not necessarily reflect the views of CityWatch.) Photo: The Real Deal.  Prepped for CityWatch by Linda Abrams.