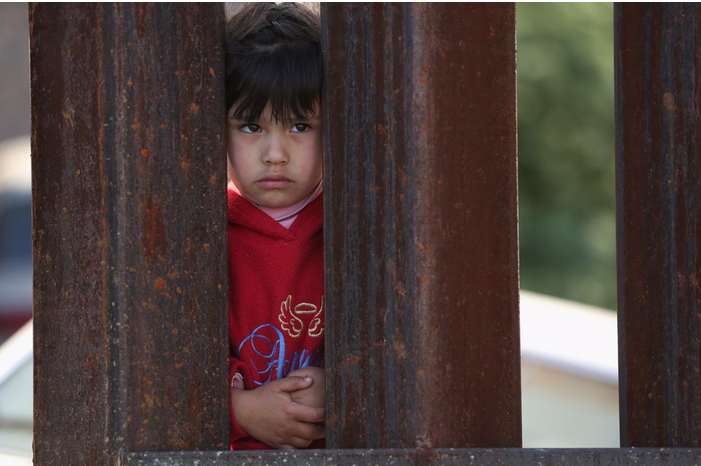 VIEW FROM HERE--The last time I checked the sovereign nation of Mexico was not an enemy of the United States. Mexico is the 5th largest Christian nation and one of the epicenters of Catholicism in the world.

Morally, religiously and theologically- not to mention politically and economically- the U.S. is more aligned with the socio-cultural norms and values of democratic Mexico than many of her other allies across the globe.

According to the Office of United States Trade Representation (USTR), "U.S. goods and services with Mexico totaled an estimated $671.0 billion in 2018. Exports were $299.1 billion; imports were $371.9 billion..." If Mexico stopped doing business with the U.S., the entire American agricultural and textile industries would collapse within days. To borrow a terrible expression from Roger Stone, " we are closer than piss on a rock."

I find it a little ironic that while Trump was overseas playing the role of George Patton come back from the grave, in all of his remarks about how glorious the U.S. victory at D-Day was, not once did I hear him mention the contribution of Mexico in WWII. The Aztec Eagles, a group of more than 300 volunteers, who trained in the United States to fight Imperial Japan, was the first Mexican military unit trained for combat. I wonder if the president knows about them? I wonder if the president knows that the only two Latin American countries that not only supported the Allies but actually declared war on the Axis Powers and sent troops to fight were Brazil and Mexico. For over 75 years Mexicans have been by America's side, bleeding with American soldiers, and paying the ultimate sacrifice. Yet, on the killing beaches and fields of Normandy, basking in the adulation of U.S. veterans, Trump had the audacity to choose that sacred space to wage an embarrassing trade war against an important military ally. I'm sorry, but publicly coercing a nation that fought alongside the Allies in WWII, all the while regaling with D-Day veterans was morally incoherent, two-faced, and deserving of impeachment all by itself.

But to make this even more shameful, the New York Times is now reporting that Trump had already hashed out much of the trade deal months ago. An official told the Times, "The Mexican government had pledged to deploy the National Guard nationwide with a focus on its southern border-a key part of Friday's agreement-during secret meetings in March between former Homeland Security Secretary Kirsten Nielsen and Mexican interior secretary Olga Sanchez in Miami."

If this story is true, I am afraid that Trump's real agenda is a lot more brutish than I thought. He may just want to prove to these leaders that he is a tough guy like them. It is obvious that he has an affinity for the strongarm ruler who is not afraid to break the rules; and he admires politicians who know how to get their way no matter who gets hurt in the process (cue, babies being separated from their mothers).

If that is the situation we are dealing with, I think it follows that Trump could care less about Mexico as a business partner; Mexicans as people with cultural and social value independent of U.S. interests; or the military legacy of Mexico in WWII. Apparently, Trump does not even care that Mexico has been a bulwark against international terrorism ever since 9/11.  Every day Mexicans show up to work, proud of their jobs, and committed to keeping Americans safe. In part, because of their vigilant defense of the southern border, there has not been another 9/11 type event in 18 years. Trump doesn't seem to care.

All Trump cares about is proving his own masculinity to other men and women who he wants to gain leverage over. I truly wish that his gamesmanship is more complicated but, at least in a Freudian sense, it's not. This is why Trump behaves the way he does. Ego mania without brakes, and hardly a victory on a real geopolitical level. This was just a ridiculous charade, one that unnecessarily harmed relations with a key ally in order to make a man feel strong in front of his rivals. After a few high-profile busts of migrating families crossing Mexican deserts and rivers, this will achieve nothing but bad memories and resentment. It sure as hell will not stop the flow of migration across Mexico.