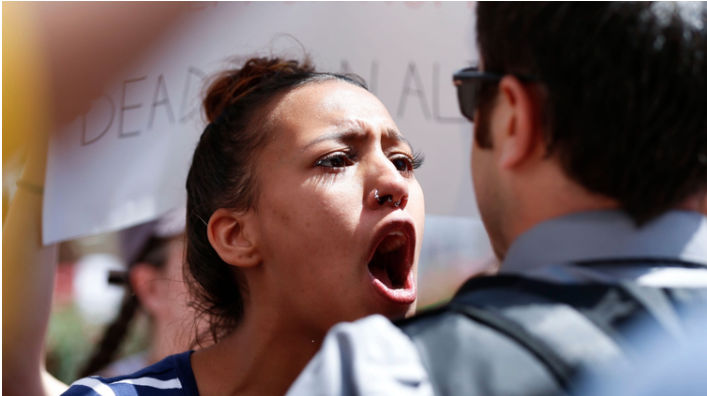 CAL MATTERS-When Georgia and other red states enacted very tight restrictions on abortions, their political leaders obviously hoped to push the issue back into the U.S. Supreme Court and into the hands of the court’s newly strengthened conservative majority.

However, the reignited political and legal conflict over when and how abortions may be performed could have a collateral impact on another burning issue in California – whether immunizations against measles and other infectious diseases should be mandatory for school children.

The symbiotic relationship between the two divisive controversies emerged last weekend during a state Democratic Party convention in San Francisco when reporters asked Gov. Gavin Newsom about a pending legislative measure that would crack down on doctors who issue exemptions from the state’s immunization requirement.

Newsom expressed skepticism about the thrust of Senate Bill 276, which Sen. Richard Pan, a Sacramento Democrat who is also a physician, introduced to further tighten the requirement that he had authored several years earlier.

Pan says a few “unscrupulous physicians” have been selling the medical exemptions allowed under his previous legislation. His new bill would require physicians to fill out uniform documents for any medical exemptions and then send them to the California Department of Public Health for approval or denial.

SB 276 has generated a storm of protest from anti-vaccination activists but cleared the Senate on a 24-10 vote last month and is now pending in the Assembly.

Opponents say that if enacted, the bill would interfere with the doctor-patient relationship and subject medical judgments to being overridden by faceless bureaucrats. It’s a position that precisely mirrors what abortion rights advocates say – including, it would appear, Gov. Newsom.

“I do legitimately have concerns about a bureaucrat making a decision that is very personal and with respect, as a father of four that goes through this on a consistent basis, that’s just something that we need to pause and think about,” Newsom said in one of several comments to reporters at the convention.

“I’m a parent. I don’t want someone that the governor of California appointed to make a decision for my family,” he added in another. “I like doctor-patient relationships. Bureaucratic relationships are more challenging for me.”

Still another: “I believe in immunizations… however I do legitimately have concerns about a bureaucrat making a decision that is very personal. That’s just something we need to pause and think about.”

After his comments hit Twitter and other social media, they erupted in digital shouts of joy from those in the “anti-vax” movement, as it’s dubbed. And, of course, they were disappointing to immunization advocates.

Newsom’s a smart politician and surely is aware that if he endorsed, either by word or deed, setting up the medical review process that SB 276 proposes, he would be undercutting his strident advocacy of abortion rights, which has included publicly inviting women who are denied abortions in other states to come to California for the procedures.

So what happens now to Pan’s bill?

An outbreak of measles in Southern California led to revelations that immunization rates had been declining, particularly in affluent communities, as parents exercised their ability to opt out. That was the genesis of Pan’s original legislation, which eliminated a “personal belief” exemption.

If SB 276 falters and the medical exemption remains intact, immunization rates may not rise to the level necessary for public health, and the fate of the bill is now, rhetorically at least, in Newsom’s hands.

(Dan Walters writes for CALmatters  … where this perspective was first posted.) Prepped for CityWatch by Linda Abrams.