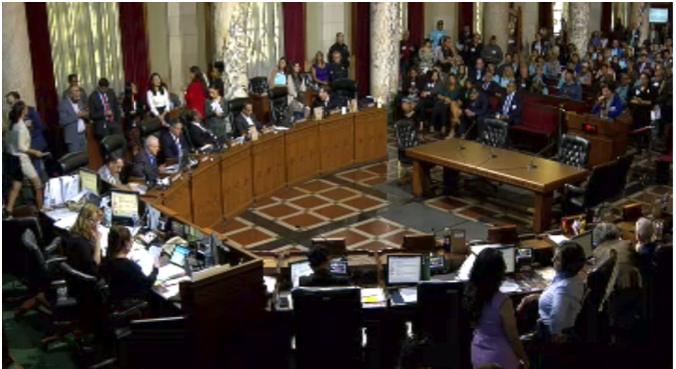 EASTSIDER-It has always puzzled me that City Council members get paid about $200,000 per year to do nothing (the highest paid in the nation), and yet that is apparently not enough. Particularly when it comes to Airbnb.

And this after a clever sleight of hand whereby City Council members now get three 4-year terms (used to be two) where they are virtually immune from being ousted. Hell, they could simply mail in their 15-0 votes and go on vacation. I wrote about this legal sleight of hand in a piece called, They’ve Always Been Cheats.

But oh no, this is Los Angeles, the home of fake liberalism resting on a bedrock of lust for money at any cost. With that in mind, let’s check out the Council’s machinations over the regulation of short-term rentals, aka Airbnb.

The Facts About Short Term Rentals

First, we know that the platform hurts renters and helps investor/owners. That’s right, check out a very good analysis at Vox.

Second, we know that it is possible to impose reasonable regulations to mitigate these effects -- see the City of Santa Monica for a good example.

To gain sayers I note that first, the Santa Monica Ordnance is still legal, even after court challenges, and the City of Santa Monica is doing just fine, thank you very much. Second, if you want to challenge the economic analysis I refer to, please do so with a neutral third-party economic analysis. There has already been too much politicking and little analysis over this whole issue. To me, the analysis and conclusions cited seems relatively non-ideological and reasonable.

LA’s recent, 3-year plus ode to income vs. residents, is an example of dysfunctional government at its best (or worst). The travel and frequent flyer blog BoardingArea captured the basics of the “new” Ordinance, which will go into effect July 1, 2019. Note that date...

- generally, short term rental limit of 120 days/year, with up to 200 days upon application;

- primary residences only as opposed to investment properties, where the owner of the “primary residence” must live for 1/2 the year (although there are a zillion ways to finesse the definition);

- RSO properties may not be listed on Airbnb;

- The City gets its TOT taxes, as it has all along, even as short term rentals were illegal;

- There are registration and record keeping requirements, although they are as wimpy as I thought back in 2017.

“If these new rules are sounding an awful lot like running a hotel, you’re not alone. Cities around the world are desperate to cash in on the sharing economy and thousands of listings not paying any tax to the city reduces the benefit of tourism initiatives. At the same time, higher taxes on

Ain’t that the truth.

What the Ordinance REALLY Says

I think most of the mainstream media coverage of the new Short-Term Rental Ordinance de-emphasizes some pretty glaring problems with the actual statute. So let’s take a look at the final document, which we discover is far from a final document.

In the first place, the adopted Ordinance does not even become effective until July 2019! That’s right, six months from now, with plenty of time to fiddle with the contents. For example, in adopting the Ordinance, the Council specifically exempted the issue of Accessory Dwelling Units (“Granny Units”), and specified that the Blumenfield Motion (67A) be referred to the PLUM Committee.

That motion states that Accessory Dwelling Units regardless when built may not be used for Home-Sharing, unless an applicant demonstrates the Accessory Dwelling Unit is the applicant’s Primary Residence.”  It also directly contradicts the adopted Ordinance which states that only bans ADU’s which “submitted on or after January 1, 2017” from Home-Sharing absent the unit being a primary residence

Under the new ordinance, hosts who use a platform like Airbnb are effectively insulated from publicizing their database information; see Home Sharing Registration, Section 3(2) where it says, “The records ...shall be made public to the extend required by law.” Since we know that Airbnb provides little detail under their current contract with the City, just the money, good luck enforcing any of this.

And while the press implies that no RSO housing stock will be lost, the exact weasel words of the law actually say, “until five years after the date of conversion.” That means that most of the buildings that have been illegally converted while the Council diddled around with a home sharing ordinance will be allowed to legally home-share.

The media also has their “cap” on home-sharing back ass backwards. While advertised as a 120-day cap, the truth is that the Ordinance provides for 200 days, of which the first 120 days are automatic.  If you look at the fine print on Extended Home-Sharing, there is marvelous language at p.14 of the statue which says, “If the Director determines that the matter will not have a significant effect on neighboring properties, no hearing shall be held.” This refers to local resident protests, including those by Neighborhood Councils.

What the final Ordinance really represents is the result of what happens when the 15-0 Council can’t agree on how to divide up the spoils; a bird’s nest of hyperbole.

I’ve been covering the issue for most of the three years of drama, and predicted the essential outcome back in 2017, in an article about Airbnb’s Contract with LA City Hall... and Why the Final Vote Is Probably a Farce.

That article includes the details of the contract with Airbnb, including an escape clause if the City gets too pushy.

I love my City. Even as the ink is barely dry on the new Ordinance, it may be only the beginning of even more giveaways. Hat tip to The Argonaut for reporting on the next shoe dropping.

“However, a new battle is emerging over what some in the home-sharing industry are now calling “vacation rentals” — i.e. second homes and investment properties that have long existed outside the standard residential housing market, which would include many of the beachfront single-family homes in lower Playa del Rey.”

While Councilmember Mike Bonin has provided lip service skepticism, check out this tip of the iceberg comment from The Argonaut piece:

“A subcommittee of the council has also advised that a “vacation rental” ordinance be enacted before the new short-term rental rules are enforced this summer.”

Stay tuned, and do not bend over.