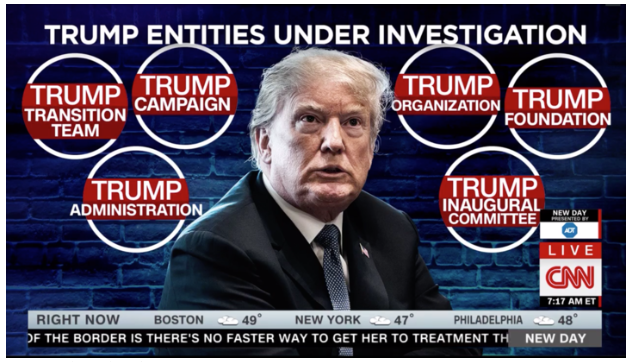 GELFAND’S WORLD--In considering these year-end wrap-ups, we move increasingly towards extending our deliberations to the two years of the Trump presidency. This makes sense, as it is an unprecedented time in American history.

This country has had wars and depressions and lots of crooks, but it's hard to imagine a level of buffoonery like we've endured since January 2017.

We're getting so much information overload that maybe we're getting used to it -- a little too used to it. Each week it seems there is another scandal that would previously have been the sort of thing that generates "Constitutional Crisis" headlines.

The most immediate update of a scandal (at least as of this writing) is the new report coming out of the Senate Intelligence Committee explaining the extent to which the Russian troll farm manipulated the 2016 election. The historical legitimacy of Trump's election is increasingly in doubt. There is a whole lot of irony at play here, considering the extent to which Trump tried to undercut the legitimacy of Obama's election.

Moreover, larger fractions of the American people are taking seriously the ongoing investigation into Russian meddling, and this translates into a larger fraction of people -- now at 62% -- who believe that Trump has been dishonest about Russian interference.

But while this story plays out, the sniveling, everyday corruption of this administration is more and more ignored, if not actually taken for granted.

Another indictment hardly makes the news, while the threat of a government shutdown is barely being spoken of.

Talk of impeachment under a new House of Representatives? Old hat. Zinke is leaving under a cloud? That's become par for the course under this presidency.

Attacks on freedom of the press

We're speaking here of the cold blooded murder of a Washington Post writer by the name of Jamal Khashoggi, who was killed in the Saudi consulate in Turkey by assassins sent by the Saudi government.

Is there anyone who wants to pretend that the Saudis were not affected by Donald Trump's viciously anti-journalism rhetoric? Anyone want to claim that the Saudi's didn't think they were somehow doing a favor to the forces opposed to journalistic independence?

Our intelligence agencies have made it clear that the blame for the crime goes right to the top in Saudi Arabia, right to the guy who has been a friend and ally of the Trump family. That person and his colleagues are clearly aware of Trump's war against the Washington Post, The New York Times, and CNN. These news outlets didn't have a lot of reporters who needed an immediate favor from the Saudi government, but there was one, and he is now dead.

Thing is, if the Saudi royal family got the idea that the United States wanted physical attacks on its reporters, they sort of got the idea wrong. Most of us still believe in some semblance of freedom, even if Trump missed that memo.

Civilized western governments ordinarily avoid killing reporters just for the hell of it. Middle eastern dictatorships are a little more cavalier about pushing people around, but to go after a journalist who works for one of the two most influential news outlets in North America would have traditionally been out of bounds.

When confronted with the evidence, Trump engaged in his usual habit of waffling. Just like the white nationalist riot in Charlottesville where Trump claimed there were good people on both sides, Trump claimed not to be convinced one way or the other in the Khashoggi killing.

It's been a long lesson for the American people, going back to the hate rallies Trump held in place of campaign events. He reveled in snarling at any protestor, "Get him out of here,"  and he did his best to rouse his followers just to the edge of violence.

At the beginning of the Trump administration, learned scribes and experienced political critics warned that Trump's personality and background pointed towards a fascist approach to American government. We were warned in careful terms that we needed to resist as quickly and as completely as we could.

It was explained that one side of the fascist approach is to go after the independence of the courts. We've seen exactly that from Trump. He has verbally attacked federal judges based on their ethnicity and recently attacked one judge's decision based on a judicial appointment by Obama.

We were also warned that fascists go after the independence of the press. Trump himself has upheld that prediction remarkably closely. Everything from "fake news" to "the failing New York Times" are aimed at discrediting the practice of journalism.

What's interesting is that the Republican establishment represented by its U.S. senators has been a lot less supportive of attacks on First Amendment freedoms. They are not exactly showing themselves to be heroes and patriots, but at least they are avoiding a replay of the 1930s in Germany.

Meanwhile, the real journalists are upholding their traditions by going after the truth, which in this era means reporting on Trump's crimes and lies. If we have something to be thankful for in this holiday season, it is the American press.