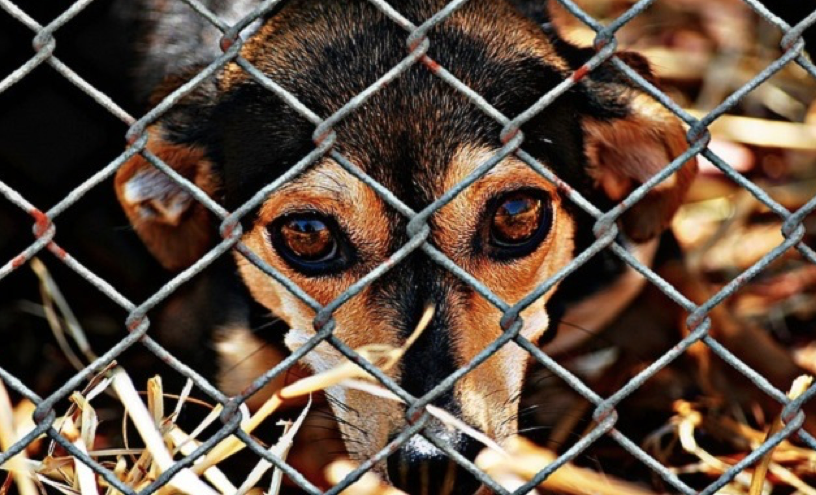 ANIMAL WATCH-On Tuesday afternoon, June 19, Ursula Carmody, an experienced volunteer at the Los Angeles Animal Services' Harbor shelter in San Pedro, bathed and brushed a medium-sized, male Shepherd-mix dog which had been picked up as a stray eight days before.

She then took the dog for a walk to assure it was dry before returning it to its kennel, but that walk ended in a vicious attack, which resulted in over three hours of surgery and four days in the UCLA Harbor Medical Center Hospital for Ursula. LAAS General Manager Brenda Barnette confirmed by email that the dog was euthanized.

Ursula smiled (as much as you can smile with your head strapped in bandages and gauze and stitches holding together half of your face) as she said she was often called and asked to come to the shelter to bathe and groom dogs that show signs of neglect or just need to be cleaned up to have a better chance of adoption.

She said she has handled dogs of all breeds, with all types of personalities and behavior, but has never had a dog bite or attack her. But this dog and this day was different, and her life is changed forever. She says she now has panicked dreams of a dog attacking her face or a black vortex pulling her down. However, she doesn't blame the dog for whatever had happened to make it react as it did on Tuesday.

COULD THIS ATTACK HAVE BEEN PREDICTED/AVOIDED?

Ursula claims that she did not see any warnings written about this dog, and a coordinator came in while she was working with him and did not indicate there was any problem noted about prior behavior. Plus, the dog was available for adoption to the public. But, reportedly, several employees said that notes to “use caution” in handling the dog had been entered in the shelter's electronic system.

She regrets that Adam, the former behaviorist who assessed dogs at the shelter, was let go. She said he made volunteers feel safer because he would provide warnings to anyone working there if he believed a dog was a potential risk or exhibited dangerous behavior characteristics. She also believes there needs to be a change in the "culture" of the shelters that has resulted from management ignoring the physical conditions and the input and safety of its own employees, volunteers and adopters in order to achieve "No Kill" statistics.

Ursula said the dog seemed comfortable with the bath and brushing all over his body last Tuesday and showed no indication of aggression or sensitivity. She decided to take him for a short walk in the sun for his coat to dry before returning him to his kennel. It was immediately apparent the dog was not leash trained, but, because of his smaller size, she could easily control him.

Not wanting to remain in the parking lot at the front of the shelter, she walked him the short distance into the adjoining park that has a walking trail that is partially cement and partially dirt. At that time, she thought she saw something on the dog’s coat on his back and reached toward him to brush it off. Without warning, he suddenly lunged at her aggressively and knocked her down. She fell face-down on the path and her backpack -- which contained items like the grooming brush, water and her cell phone -- fell forward and covered (protected) the back of her neck and head.

She said the dog immediately began violently biting her left arm, not ripping the flesh off but biting and chewing on it from her elbow to her shoulder. He then attacked her arm pit, where he also inflicted repeated bites, and then moved to her face, where he detached her entire cheek and pulled back flesh toward her ear. Fortunately, the dog's bites missed her eye socket and he did not detach her ear. She said she was screaming for help, but there was no one in the park or on the street to hear her.

She said the pain was excruciating and all she could think was she was going to die. But, suddenly, he stopped. She believes it might have been because of a siren going by. He turned and started running toward Gaffey Street, which is a very wide, busy thoroughfare. She later learned he had run back to the shelter.

She was finally able to stand, pushing herself up with her right arm. Blood was flowing from her arm and face as she walked to the street and turned into the shelter parking lot, where employees and others saw her. Someone ran to the neighboring LA Fire Department station for help. She was losing so much blood and was so badly injured that the responding firemen immediately transported her to UCLA Harbor Medical Center in Torrance in their vehicle rather than waiting for an ambulance. She underwent over three hours of surgery that night.

I spoke with a representative of the fire station who was there during this incident. He could not divulge any details but concurred they had responded to a “silent alarm” (where someone comes personally to the station, rather than calling 911) around 4:30 p.m. reporting that a person had been seriously attacked by a dog at the shelter. One witness described Ursula’s facial injury as looking like the dog “tried to tear her face off.”

Adding to the stress of the attack for Ursula was the additional prospect of having to undergo a rabies-prevention series of four shots. The hospital prudently would not risk the possibility that she might have contracted rabies (especially in the case of an unpredictable attack by a stray dog with no available vaccination history). She was advised that she would need the preventive shots if they could not get a negative report from LA County Health Department. Brenda Barnette later confirmed to me by email, that the dog was euthanized, and LA County Health Department tested it for rabies; she was told there was no indication of the virus.

Ursula also received that report at the hospital and was finally discharged late at night on June 22. She has an appointment to return next week because of the possibility of needing plastic surgery for her face, which her daughter described from the photo as "looking like a piece of burned pizza," and the potential permanent nerve damage to her face and arm.

WHO IS URSULA CARMODY?

Ursula Carmody is a very accomplished and caring woman. Her profile on HealthWorks6 reads, "Dr. Ursula Carmody III, DO, is a Clinical Social Worker specialist . . . having over 21 years of diverse experience." Ursula told me that she had worked with both USC Medical Center and the UCLA Harbor Medical Center, including in the trauma units.

Her husband, John Carmody, currently serves as Vice Chair on the City of Lomita Public Safety and Traffic Commission.

She retired in 2016 and loves animals, so she wanted to continue contributing to the community by volunteering at the shelter. She and her husband have raised several guide dogs for the sight-impaired and have always had multiple dogs in their family.

The advent of the “No Kill” movement caused LAAS to implement a policy of prohibiting notes on kennel cards where they might be seen by the public, since full-disclosure of employees’ experiences or observations might influence a potential adopter -- especially someone with children and other pets.

However, these dogs are regularly released to rescue groups -- some of which specialize in "at-risk" dogs with known behavioral concerns, including prior aggression incidents involving humans or other animals -- and make them available to the public.

However, LA Animal Services was asked to go beyond that in a 38-item list introduced by Best Friends’ advocate Commissioner Layne Dicker and Commissioner Olivia E. Garcia on January 9, 2017 "...to make sure that experienced ACT's are available to monitor and walk all PDA (Potentially Dangerous Animals) every day." It also asks for a "Report on how often dogs get out of kennels for walks and PG's [play groups]. All dogs, including PDA (potentially dangerous) dogs." This means bringing such dogs out into the public areas, regardless of who is walking them.

This practice has apparently expanded to include volunteers, who have keys to all the kennels -- rather than restricting such dogs to inaccessible areas/kennels. Plus, the insistence on walking of all dogs daily is frequently repeated by Commissioner Dicker at Commission meetings -- rather than emphasizing kennel enrichment for animals that pose a risk to safety of employees, other shelter pets, and visitors.

At a November 14, 2017, hearing, where the founder of Ace of Hearts Rescue appealed to overturn the Dangerous Dog decision regarding a Pit Bull which had attacked two children in one day, Commissioner Dicker opined that "the dog has sensitivity around children, but I believe the triggers can be managed." He agreed with license revocation and moving the dog outside the city of Los Angeles, rather than destroying the dog and voted against a Dangerous Animal decision. (Read more here.)

Commissioner Dicker's only public claim at the meetings to having dog-handling experience/training is his involvement with Best Friends' Animal Society "play groups." Commissioner Garcia has never mentioned a background or expertise in dog-behavior assessment or training.

The prior Commission policy (October 20, 2014) prudently contained strict provisions, including adherence to record-keeping procedures; walking/socializing animals only within the shelter; and NOT recommending such activities (with exceptions) for evidence dogs, possible-owner dogs, dangerous animals, stray dogs (before end of legal hold period), quarantined dogs, personal-property dogs; and dogs on a 45-day hold for public adoption (aggressive behavior.)

POTENTIALLY DANGEROUS DOGS IN LOS ANGELES AND IN CITY SHELTERS

Los Angeles Animal Services' Hearing Department reports that during the period from June 1, 2015 - June 19, 2018, it has conducted a total of 1,772 Dangerous Dog/Animal Hearings. The total number of dogs actually declared "Dangerous" during that period was 50. (Most of these dogs are impounded pending the hearing.)

These are the total bites/attacks reported (many dog bites are not reported) in the city that were serious enough to require an official hearing. (See LA Municipal Code Sec. 53.34.4 dangerous Animal – Procedures.)

This figure also does not represent all the attacks by dogs that were not identified, nor those that attacked or killed pets.

"LIFE-SAVING" MUST INCLUDE HUMANS

General Manager Brenda Barnette has just replaced/hired her 8th Assistant General Manager since being appointed in September 2010. Additionally, the members of the Commission, which officially heads the department, are now mainly activists with no professional sheltering or municipal-government experience (with the exception of Alisa Finsten, who is a former City employee). This results in a serious instability in management and the ability to maintain sound and consistent policy.

From what happened to Ursula Carmody, it is obvious that the proper safeguards are not in place at LA Animal Services' shelters to protect either animals or people. And, it is apparent from this and earlier attacks that there is no specific procedure which requires obtaining a detailed report from the victim (employee/volunteer/member of the public) of what happened and conducting an immediate interview/investigation when an incident occurs. Could this possibly be because the laxness in safety policy generates more injuries than the Department wants recorded?

The most recent Assistant GM hired in April, with the responsibility over law-enforcement and shelter-management operations, is called the "Asst. General Manager of Life-Saving." She is in charge of attaining "no kill" statistics in the shelters, which results in keeping even dangerous or potentially dangerous dogs not only alive but transferred to "rescuers" where they can be adopted to the public.

We cannot ignore, forget or minimize what happened to Ursula Carmody. Whether a victim is an employee, volunteer or an adopter -- LA Animal Services must remember that Human Lives Matter, too!