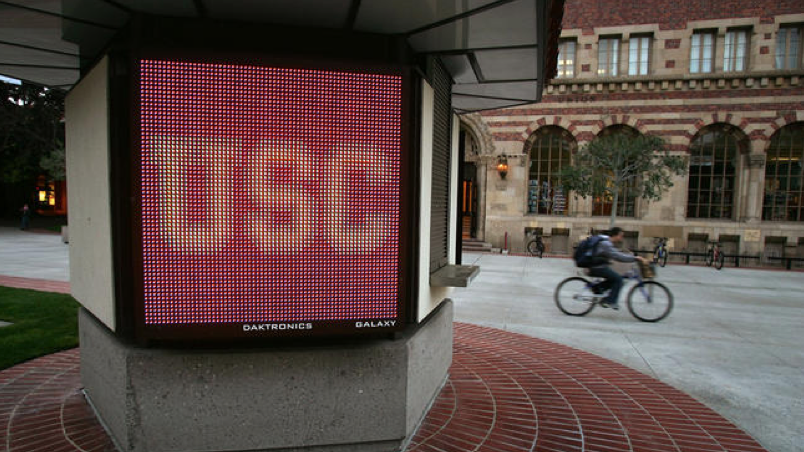 GUEST WORDS--The University of Southern California in Los Angeles has been at the center of a sexual abuse scandal involving a health center gynecologist.

When we stepped on to the University of Southern California campus during freshman orientation in the summer of 2013, we were repeatedly cautioned to be vigilant. We kept an eye on our drinks at frat parties for fear of being drugged and made sure our drunk friends got home safely. We bought pepper spray and clutched our keys in case catcalls turned aggressive. When the worst happened, we supported each other through the emotional aftermath of sexual assault, whether we chose to report it or not. One place we never imagined abuse ― one place we believed we would be safe ― was our doctor’s office.

We were wrong. On May 16, the Los Angeles Times reported that for decades, USC had received numerous complaints about inappropriate conduct by university gynecologist George Tyndall (photo leaft). Yet, Tyndall would remain employed at the university health center for almost 30 years, until USC finally forced his resignation, with severance, in June 2017. When we arrived on campus, we didn’t know about those complaints. We both became his patients, and then his victims as freshmen, and he would continue to treat us both throughout our college years.

The Engemann Student Health Center had attempted to create a safety net to protect patients in the event of human failure. Victims could report Tyndall’s misconduct, and many did at the time of the abuse. For some of his tenure at USC, his appointments were attended by female medical personnel, or chaperones, a measure designed to hold the doctor accountable during pelvic exams. But these measures merely gave the illusion of protection: Tyndall continued his abusive behavior in the presence of the chaperones, and when they complained in 2013, it did not result in termination. The problem is not that USC lacked a safety net; it’s that it knowingly maintained a defective one.

The problem is not that USC lacked a safety net; it’s that it knowingly maintained a defective one.

When an institution fails this horrendously, repair seems even more daunting than if no safety net existed at all. How do you rehabilitate a system that accounted for human fallibility and yet still failed to respond? How can we move beyond mere gestures at patient safety to actually keep students safe?

First, USC needs to mend the trust it broke with its students and alumni. This means a drastic overhaul of the system it permitted to victimize its students. For years, USC’s sole consultant for women’s health questions was a predator. There must be an increased focus on hiring female physicians, and USC must consult and hire female administrators. It is no coincidence that a male-dominated administration ― USC has never had a female president― failed to prioritize women’s health.

In the aftermath of this catastrophe, President C.L. Max Nikias will be stepping down, but the change can’t stop with him. His removal must be accompanied by a culture shift toward accountability, beginning with a public forum for victims to speak to administrators and, if possible, to confront Tyndall. This public voice serves two purposes: to allow victims to begin to heal their wounds and for the USC administration to learn from the women it made victims. As USC attempts to reform itself from within, many victims are suing from outside of USC’s tall, daunting gates. It is pivotal that their grievances be handled with sensitivity. If USC turns to victim-shaming in its own defense, it will decimate trust from past, present and future USC women.

At 18, we became victims to one doctor on one campus, but we know this heinousness is not limited to USC. As tempting as it is to view this incident in isolation, USC is merely a case example of American universities’ struggle to provide adequate services for student health and its failure to sufficiently address sexual assault. The abuses we and our fellow Trojans endured are a part of a systemic, cultural problem in which sexual assault and harassment run rampant and victims are silenced by the systems that claim to protect them. How USC chooses to reform its culture will be symptomatic of and a small informant in how this grander societal culture takes shape.

In the era of #MeToo, it is clear that abuse by those in power has infiltrated a multitude of industries to create a global expanse of victims. Alongside this movement to increasing public awareness of these abuses must be a societal demand for tangible, sustainable mechanisms of accountability within the very systems that allowed abuse. This burden does not fall on only the victims. It is society’s collective burden. Without a cooperative effort to inspire internal organizational changes, society risks perpetuating a culture that accepts abuse and normalizes these atrocities. If systems do not hold predators accountable for their conduct, we cannot place our trust in authority.

The story of Dr. Tyndall will live on painfully in the memories of his victims, and unfortunately we cannot guarantee that doctors will not abuse the trust of their patients like Tyndall abused ours. But this isour plea to learn from and to act with expediency and sensitivity to protect the safety of millions of college women to come. What happened at USC is a lesson for all of us. Let’s start treating it like one.