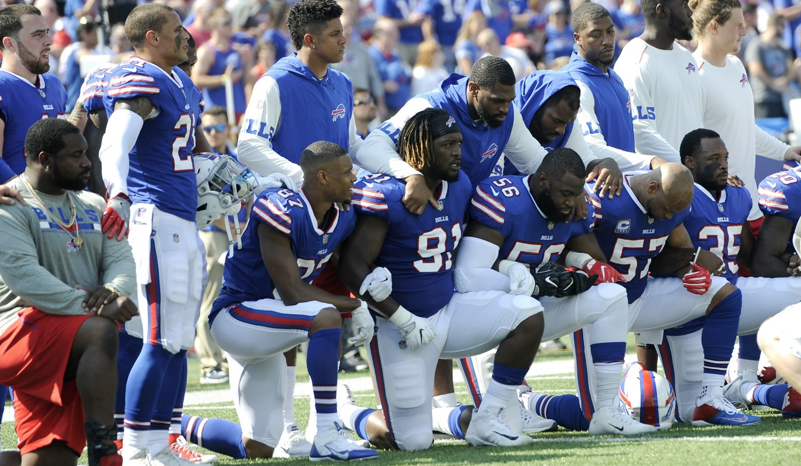 SPORTS POLITICS--In what has to rank among the worst ideas in the history of the National Football League—alongside decisions to cover up concussion research and ignore the issue of violence against women—NFL owners have come up with a new proposal to deal with players who protest police violence and racial inequity during the National Anthem.

This idea is so terrible that one wonders if it was leaked by another owner as a way of preemptively humiliating whoever proposed it from ever uttering the notion again. One can only imagine an official saying, “Exercising of constitutional rights. On the kicking team. Fifteen-yard penalty. First down.” That the idea is almostThe Onion–worthy is not the only reason why penalizing players for protest is a nonstarter. NFL players have had the space to protest during the anthem not out of the noblesse obligeof ownership but because it is enshrined in the Collective Bargaining Agreement with the union.

The union has already made clear in its collusion grievance on behalf of unsigned player Eric Reid that “there is no League rule that prohibits players from demonstrating during the national anthem. The NFL has made it clear both publicly and to the NFLPA that they would respect the rights of players to demonstrate. The Collective Bargaining Agreement definitively states that League (NFL) rules supersede any conflicting club rules.” This is the union’s line in the sand.

The idea that some owners would even propose this without speaking to the union is a sign of how drastically out of touch this group of aged billionaires is from the players in their league. If they did somehow muscle this rule into effect, as ESPN’s Bomani Jones pointed out on Twitter, it could actually lead to solidarity between sidelines. Imagine if five players on each squad decided to kneel during the anthem. That would mean offsetting 75-yard penalties, and we will have entered a true theater of the absurd.

Another idea the owners have apparently bandied about is allowing individual teams to set their own policies for the anthem. This is also ridiculous. Does that mean franchises in red states would suspend players for protesting police violence but in blue states it would be allowed? Does that mean that if the Carolina Panthers were playing a road game in the Bay Area, then they could kneel, but not at home?

They are also discussing clearing the field for the national anthem, which would put league policy back to what it was a decade ago before the NFL entered a lucrative partnership with the Pentagon.

In speaking about why they were having so many issues attempting to come up with a cohesive policy, Cowboys owner Jerry Jones said, “It’s not that easy. We’ve got a lot of things that we’re trying to balance. We have the interest in every constituency that’s involved here, and the issues that are involved, and we recognize that with our visibility and the interest itself, it’s taken a life of its own I’m not trying to diminish issues of our rights here. But the number-0ne thing here is our fans. And I know our fans want us to zero in on the game, zero in on football. They want to come to the game and get away from a lot of the other issues that are out there.”

This is a very dishonest analysis. Owners are wringing their hands because in sportswriter Mike Freeman’s words, they are “terrified” of Donald Trump, even though, as surreptitiously recorded meetingstell us, they think he is a dolt.

If NFL owners actually knew what they were doing, they wouldn’t be having these Hamlet-esque meetings about how to clamp down on protest and would instead merely assert the basic truth: Players hold the right to protest, and fans should respect that right. They would continue to meet with players to make sure that their concerns are heard and aren’t treated like expendable pieces of equipment. They would stop colluding against free agents Colin Kaepernick and Eric Reid and promise to cease this practice against any player who protests in the future.

They won’t do this, however; not because they care about the sanctity of the anthem, but because to do so would mean ceding power to the players and the union. That is why, no matter what the owners decide about “anthem policy,” the NFLPA and the players will have a fight on their hands. This is about race and police violence. It is also about labor rights. As soon as we realize that, the question is not about the anthem. It’s about the oldest question of the labor movement, one that every fan should ask themselves: Which side are you on?

Update: NFL owners have now passed a policy, with one exception, to fine teams who kneel or sit or don’t show “proper respect” for The National Anthem. Teams will have the option of then fining individual players. This will undoubtedly be challenged by the union, individual players, and, yes, even some fans. The NFLPA has already issued a statement challenging the “policy” (their quotes).

(Dave Zirin is the sports editor of The Nation… where this perspective originated.)