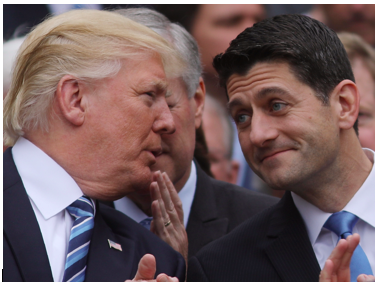 The proposal is part of a larger tax overhaul aimed at lowering corporate tax rates and repatriating many billions of dollars in corporate profits being held in other countries to avoid high U.S. taxes.

It is, Brown and Cuomo said in a joint electronic news conference, patently unfair to impose new tax burdens on residents of high-tax states such as California and New York by eliminating state and local tax (SALT) offsets.

“It’s a gross manipulation of our tax code,” Brown said. “It’s a Hail Mary pass by the Republicans.”

Cuomo went further, alleging that Republicans want to punish residents of Democratic-voting states. “It’s using a handful of states to finance the tax cuts for their states,” he said.

Tax policy thus has become another item on the long list of conflicts between Democrat-dominated California and the Republican-dominated federal government.

The state’s 14 Republican congressional members initially supported the plan, and Brown sent them a letter imploring them to reject the proposal.

“Getting rid of an individual’s ability to deduct his or her California taxes is a horrible idea,” Brown said in his letter, “but it is made far worse when you preserve—at the same time—the right of corporations to take those same deductions.”

One GOP House member, Darrell Issa of San Diego County, replied in kind to Brown: “I recognize the role of the state and local tax deduction to reduce the tax burden on many Californians, but let’s be clear: It has only become of such importance as a direct result of the tremendous weight that your misguided policies have put on California taxpayers.”

California collects nearly $300 billion a year in taxes, one of the nation’s highest tax burdens as a percentage of personal income. That burden has climbed sharply in recent years, thanks to voter approval of increased rates on high-income taxpayers that Brown advocated and surges in taxable sales and property values.

Californians claim roughly $100 billion of those taxes as deductions on their federal returns each year, thus saving them perhaps $20 billion. Even so, California still pumps about $400 billion into the federal treasury each year and receives nearly that much back in federal spending.

What is and is not taxed is an arbitrary political process at all levels of government. The interactive effects of tax policies, and their fairness, are largely in the eyes of their beholders.

On one hand, it could be said that the SALT deduction means California’s (and New York’s) high taxes are being subsidized by taxpayers in other states.

On the other hand, since the feds still spend somewhat less in California than the state provides in federal taxes, one could say that Californians are already subsidizing federal payments in other states, and eliminating the deduction would increase that disparity.

Underlying the palaver about fairness are two political factors.

But Democrats also fear that eliminating SALT deductibility would entice high-income taxpayers to change their official domiciles to low-tax states such as Texas, Florida and Nevada, thereby slashing state revenues. That would hit California especially hard because a relative handful of wealthy Californians provides more than a third of the state’s general fund revenue.

Later in the week, Brown, Cuomo, et al got a bit of relief when Republicans said they would retain deductibility for local property taxes up to $10,000. But the GOP plan is still a big threat because state income taxes are a much bigger chunk of the issue.

Dan Walters has been a journalist for nearly 57 years, spending all but a few of those years working for California newspapers. He has written more than 9,000 columns about California and its politics. This Walters perspective originated at CalMatters a nonpartisan, nonprofit journalism venture committed to explaining how California’s state Capitol works and why it matters.)