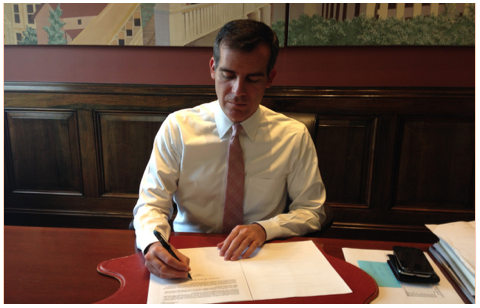 MY TURN-This is kind of a segue from my last article "Not in My Back Yard" for which we received many comments. One of my more constant critics thinks I live in an alternative universe. That can be taken as a compliment because there is at least light at the end of my tunnel. His must be really gloomy!

Town Halls and workshops are being held all over the City to get input from Angelenos about what they want their City to look like in the not-so-distant future. I'm sure there are some great ideas out there and, as the eternal optimist, I'm hoping they will be utilized.

One complaint I heard again and again was that there are too many people moving to LA and this will only increase the number of homeless folks and our traffic. Maybe we can put up a wall and get Mexico to pay for it?

Hate to burst the bubble folks but in a recent Forbes Magazine survey of the 25th fastest growing cities, LA didn't make the list! The top state is Florida, which has a half dozen cities on the list. So perhaps Florida should build the wall and get Cuba to pay for it.

Our birthrate has dropped. Long-term, if we don't have a population spurt we'll have to have a single-payer healthcare system...Medicare!

I love researching surveys. WalletHub sends me gems at least once a week. This is a fine financial-based firm but sometimes its surveys make me laugh. They did one on the most sinful city in America, and the best cities for Foodies and Hockey fans. Los Angeles didn't even make the top 20 for the most fun cities in America.

One survey came across my screen lately listing the 150 best-run large cities in the country. This one was not funny but very enlightening. I thought for sure we would be in the top 25, but we are number 131. Out of the top four cities by population we beat New York and Chicago and were bested by Houston which placed number 71.

Granted, some of the top-ranking cities are much smaller than LA. We are number 2 in population, so our governing issues are not comparable.

To compile the top best- and worst-run cities in America, WalletHub’s analysts compared 150 of the most populated cities across six key categories: 1) Financial Stability, 2) Education, 3) Health, 4) Safety, 5) Economy and 6) Infrastructure and Pollution.

In their analysis they asked, "How do we measure the effectiveness of local leadership? One way is by determining a city’s operating efficiency. In other words, we can learn how well city officials manage and spend public funds by comparing the quality of services residents receive against the city’s total budget."

Using that approach, WalletHub’s analysts compared the operating efficiency of the largest U.S. cities to reveal which among them are managed best. More specifically, they constructed a “Quality of Services” score comprising 33 key performance indicators grouped into six service categories, which they then measured against the city’s per-capita budget. Their ratings range between 1-150.

Not exactly a great report card. Of course, five California cities vied for having the most pollution, including LA.

After gathering all the data, Wallet Hub went to five experts in various parts of the country and asked them the following questions:

In your opinion, what are the most important issues facing U.S. cities today?

Why are some cities better run than others?

What can citizens do to increase the transparency and accountability of local government?

Are some forms of city government — a strong mayor versus a strong city council, for instance — more effective than others?

In evaluating how well a city is run, what are the top five indicators?

The answers are fascinating and I urge you to read Wallet Hub’s entire report. This is especially important for those of you who are active in city affairs.

Here’s some more food for thought…

--With a new school Board, LA has an opportunity to "think outside the box.”

I don't know about all of you, but despite mediocre ratings, I wouldn't want to live anywhere else.

As always, comments are welcome.

(Denyse Selesnick is a CityWatch columnist. She is a former publisher/journalist/international event organizer. Denyse can be reached at: Denyse@CityWatchLA.com) Edited for CityWatch by Linda Abrams.