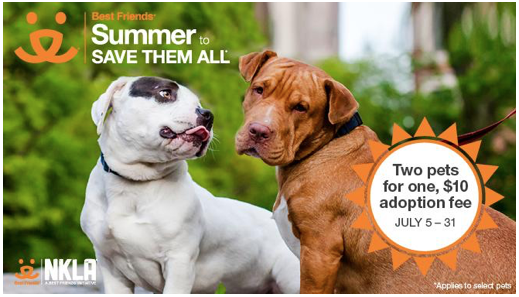 ANIMAL WATCH-Best Friends' Animal Society, Los Angeles, is offering discounted pets as a 2-for- $10 pair during July. Their posted "Current Special" features two adult dogs. Is the former religious group -- which started as the Church of the Process of the Final Judgment -- -becoming desperate to achieve its (registered) mission to "save them all" and reach a "no kill" metric by the end of 2017?

The only restrictions indicated on the Best Friends "special" is that the two-for-one-adoption-fee promotion at their Valley location applies to only "pets over 6 months," and at West LA it is limited to "select pets."

Alarm rang out among rescuers who have reacted by e-mail, on social media and in chats with a full gamut of emotions from concern for the safety of the animals to outrage over offering "cheap" animals being no better than Craigslist, to full-blown anger that any adoption organization would treat animals like "bargain-basement" merchandise. There was also a comment commending Best Friends for "emptying its shelter."

Adopting two puppies or two kittens may (or may not) be a good idea, but unquestionably requires tremendous knowledge, patience and time, even for a well-seasoned owner.

But the adoption of two adult or adolescent animals, unless they were surrendered as a pair and/or are already compatible and well behaved, can result in unexpected reactions and even danger -- especially for an inexperienced owner not familiar with the nuances of animal language and behavior.

Adding to concern is that the two dogs which are shown as a pair appear to be young-adult Pit Bulls or mixes -- one with wrinkles that resemble a blend of Shar pei (Chinese dog used for fighting). Of course, Best Friends advises that Pit Bulls cannot be identified by appearance, so readers can draw their own conclusions.

But, there is no written description otherwise, and Best Friends is unabashedly one of nation's major proponents of Pit Bulls as a family member and companion, explaining that they are not a "breed" but a collection of similar-looking or types of dog.

Best Friends Animal Society uses its high-profile status to openly oppose and lobby against breed-specific legislation (BSL) and support enactment of laws against any "breed discrimination" that could curtail ownership of Pit Bulls, at the same time declaring adamantly that Pit Bulls are not a breed.

Best Friends contends that Pit Bulls are "just as safe and gentle as any other dog," and dog bites are dependent upon whether the animal is neutered and its nurture (how they are raised or treated), rather than its nature (behavior and propensities determined by genetics.)

In 1976, Richard Stratton of San Diego, published a 171-page book entitled, This is the American Pit Bull Terrier.  His purpose was to revive interest in Pit Bulls and dog fighting, which had decreased drastically after passage of the Animal Welfare Act of 1966 and relentless investigations conducted by the Humane Society of the United States (HSUS) to gather evidence for reforms that would include animal fighting.

Stratton was successful in this effort. His book became the bible for a whole new generation of Pit Bull enthusiasts interested in the "game" and their breed.

Stratton explains that the dog which has come to be known as the American Pit Bull Terrier, "...reigns supreme once we learn that the animal has been bred for fighting and tested thereby for many centuries. Its bloodlines have been guarded and cherished throughout generations and from the dawn to the fall of civilizations all over the world." (p.7) (Emph. added.)

He explains the advantages of the physical attributes of this breed, one being the large head: "It makes larger jaws possible and provides a base for the musculature to service those jaws. One of the advantages of large jaws, besides the obvious one of providing more punishing power, is that of heat dissipation. A dog doesn't sweat like a human, but he throws off excess heat around his mouth. The more tissue exposed, the better." (p. 51)

"As all knowledgeable pit dog men will tell you, the physical makeup of a fighting dog isn't that important...The real difference that sets the Pit Bull apart from other breeds is inside his head. It is his unworldly love of battle that gives him his real edge...There is just something about an opponent that keeps coming after you even after you've done everything you can do to him that is downright terrorizing! Some may think that his unholy love of battle is a psychotic condition, but ...It is simply a matter of breeding...a well-bred individual of this breed will never cease fighting ... this is the trait that is called gameness by pit dog men and it makes the breed indomitable!" (p. 53)

Richard Stratton, who has been widely sought as a Pit Bull show judge and expert witness for dog-fighting trials, but in his 1991 Book of the American Pit Bull Terrier states he does not "match dogs" himself but sticks his neck on the line for dog fighters because he is "...concerned that the matching of dogs will be stamped out." (p. 35)

Stratton appears on the cover of a 1997 issue of American Pit Bull Terrier Gazette, containing a two-page guideline on, "How to Counter Anti-Dog Proposals," which starts with "Prepare Now to Defend Your Breed!” and then contains the steps to take to oppose "any animal regulations or bans." It is not notably different from what Best Friends and other organizations do today, except that it never denies Pit Bulls as a "breed."

Opposition to bans or regulation is to assure there is no interference with maintaining the genetic "gameness" of the dogs, which is the basis for the lucrative "sport" of dog fighting and high-stakes gambling enterprises. If these bloodlines are diluted or lost, the "game" qualities from generations of selective breeding cannot be recreated. It would be the end of a multi-billion dollar worldwide industry which can now flourish without concern about protective restrictions on breeding or owning Pit Bulls which die wretched deaths in pits or end up in shelters.

State of Louisiana Articles of Incorporation show that Best Friends Animal Sanctuary was the latest in a long list of entities incorporated first in 1968 as The Process Church of the Final Judgement [sic], again in 1974 as The Foundation Church of the Millennium. Then, in 1976 it changed to The Foundation Faith of the Millennium, in 1978 became the Foundation Faith of God. In 1993 the registered name changed again to Best Friends Animal Sanctuary.

The last report under this filing was on 6/16/2011, but a 12/9/2016 listing shows the directors, which include Francis Battista, current Board Chair and Cofounder, and Gregory Castle, Chief Executive Officer, names identified with current Best Friends' programs.

The religious beginnings of the cofounders of Best Friends is no secret and is easily determinable on Wikipedia - Best Friends Animal Society and Wikpedia - The Process Church of the Final Judgment.  A complete timeline shows the original founders, Mary Ann McLean and Robert de Grimston Moor, left the Church of Scientology to develop what became known as The Process.

The Process Church of the Final Judgment was the apocalyptic shadow side of the flower-powered ’60s and perhaps the most notorious cult of modern times.

Hundreds of black-cloaked devotees, often wearing a satanic “Goat of Mendes” and a swastika-like mandala, swept the streets of London, New York, Boston, Chicago, New Orleans, and Toronto, selling magazines and books with titles like Fear and Humanity is the Devil. And within the group’s “Chapters,” members would participate in “Midnight Meditations” beneath photographs of the Christ-like leader.

Process’ “Death Issue” interviewed the freshly-imprisoned Charles Manson leading to conspiracy hysteria in such books as Ed Sanders’ The Family and Maury Terry’s The Ultimate Evil. A lawsuit against Sanders’ Manson book led to the removal of its Process-themed chapter by Dutton.

Love, Sex, Fear, Death is the shocking, surprising, and secretive inside story of The Process Church, which was later transformed into Foundation Faith of the Millennium, and most recently as the Utah-based animal sanctuary, Best Friends.

Many additional links are provided in a 2011 article, entitled, Best Friends of Utah:  The Process Church of the Final Judgment to Animal Society.

Cofounder Michael Mountain tells his story of the evolution from The Process Church to Best Friends in a 2004 article, entitled, "Friends Find Their Calling."

People have differing opinions about the benefits or potential harm of discounting adoption fees to $5-per-pet and/or requiring a pair to be taken together.

But, one remaining question is why Best Friends is rushing to meet a deadline for LA Animal Shelters to show stats that qualify as "no kill" by the end of this year. Has there been some prophecy that the world is ending soon?

Are they planning to leave Los Angeles and stop costly subsidies to rescuers?

Is there reason to believe that after Best Friends' e-metric is met, homeless and unwanted animals will cease flooding into the city's municipal shelters?

This appears to be a self-imposed date by Best Friends, whose contract allows for continued possession of the Mission shelter if they opt to renew.

Is there a compelling desperation that makes it worth risking the lives or safety of animals and people with a "2-for-$10" deal they just can't refuse? Or, does "saving" them justify any risk?