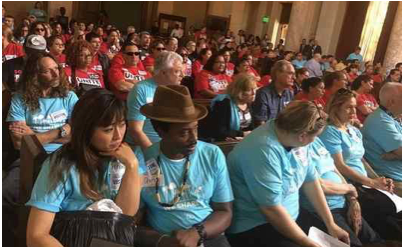 EASTSIDER-It was supposed to be the equivalent of show and tell with a predetermined outcome. Then hundreds and hundreds of people showed up for the hearing. The Council Chamber quickly filled up, there was another overflow room that overflowed, and ultimately a large crowd wound up outside City Hall on the adjacent lawn. All this before the 2 p.m. start time. I heard estimates of something like 500, give or take, and the PLUM Committee was obviously not ready for the sheer magnitude of their audience.

The Committee was taken aback, both by the vitriol as well as the sheer numbers of people willing to endure City Hall on a weekday afternoon. So before anyone could actually testify, Chair Jose Huizar quickly finessed the entire afternoon by saying that the matter was going to get re-calendared in July or August, after the PLUM Committee digests the testimony and makes inquiries of the Planning Department.

It was clearly Huizar beating a strategic retreat in the face of the unexpected. Since the City already has a contract with Airbnb (illegal though their product may currently be,) I think the plan had been to listen, pretend they cared, and then slam through the draft ordinance without change. You know, a “City Hall Special.”

But Airbnb didn’t play fair. They jammed the meeting with demands to eliminate all caps and allow full-time year-round unregulated hosting. They want it all, and they want it now, and they want it legal. Oops! And on the other side, the hotel industry and unions pointed out that the TOT money the City is getting out of the proposed deal is in fact less than they wind up losing by way of decreased hotel taxes and lost wages and jobs from unionized hotel workers.

So, ‘Houston, We Have a Problem!” Just like the Apollo 13 astronauts famously said on their 1970 moon flight. One look and Huizar punted. Clearly, the Planning Department would have to be asked a bunch of questions by the Committee and the matter would need to be be rescheduled for further review.

As an aside, for those who don’t know, the PLUM Committee currently consists of Jose Huizar (Chair), Marqueece Harris-Dawson (Vice-Chair), Mitchell Englander, Gill Cedillo, and Curren Price Jr.

Current State of the Draft Ordinance

I’ve been over the Planning Department recommendations before, recommending 180 days/year allowable for hosting, allowing “primary residences” only to be rented, a specific prohibition of using units “eligible” for Rent Stabilization, and then vagueness on almost everything else. The actual definition of “Home Sharing” in the Ordinance is:

“…An accessory use of a Host’s Primary Residence for a maximum of 180 days in a year for the purposes of providing temporary lodging for compensation for periods of 30 consecutive days or less.”

The rest of the draft Ordinance is pretty loose on details, deferring them to after-the-fact regulations. That is, until the Housing Committee met in December to slice up the tax money that is currently being paid under the signed contract between Airbnb and the City. For the details of that curious agreement, look here.

I say “curious,” because short-term rentals are still illegal in Los Angeles, and it seems a bit unseemly for the City to be extracting money for an illegal activity while they play around with a draft Ordinance. On the other hand, this is the City of Los Angeles, with its fascinating City Attorney.

Before you get giddy with the 10% for enforcement proposal, read the fine print. There is now a brand new motion from Huizar on the table (Council File 14-635-S3) which basically provides that the 10% can be used to out-source the whole shebang:

”...to provide short-term rental permitting and enforcement information technology services, with regards to the administration of the Home Sharing Ordinance.”

Translating this into English, it’s for administrative and tech services, as opposed to any real enforcement.

The Planning Department presentation was less interesting than the questions asked by the PLUM Committee at the end of the meeting. It was here we discovered, for example, that 10% of the TOT fees are going to enforcement, which sounds good. It isn’t.

Other tidbits came out. When Huizar, all pretend innocent, asked how Planning came up with a 180 day cap and what was it based on, they gave him an honest answer. Initially they had recommended 90 days, based on best practices from other cities. Then after the Airbnb push back, they revised the proposal to 120 days. And finally, at the Planning Commission hearing, they increased the number to 180 days.

Now if you still believe in the Tooth Fairy, you will believe that the change came about because of incredibly compelling information at the Planning Commission hearing. The rest of us know that the Mayor caved in to Airbnb and directed his appointed Commissioners to front for the change.

And, oh yes, under questioning by Marqueece Harris-Dawson, the Planning Department admitted that they have no hard data on which to base any of these numbers. They did assert, however, that using 180 days would cover about 92% of all Airbnb hosts that they know about. They also stated that the draft ordinance does not distinguish between hosted vs. no-host rentals. Hmmm.

Other tidbits from Planning: for what it’s worth, their recommendations were not based on any actual revenue estimates for the various scenarios. And finally, they stated that the reason they did not recommend full-time no-cap hosting was that they simply couldn’t enforce it.

Amidst all these events, aside from the huge numbers of speakers and Airbnb’s sudden lust for full-time no cap rentals, the actual testimony was eminently predictable.

Airbnb gathered together a large number of people who had heart wrenching carefully scripted personal tales saying that, but for Airbnb, they would not be able to live in their homes. There also seemed to me to be a number of speakers who came from each of the Districts represented by the PLUM Committee membership. Airbnb must be getting ready for their IPO.

The other major block of attendees came from the Hotel industry by way of industry spokespeople and union members. Their message was that this is essentially a zero sum game, and the money flowing through Airbnb is money lost to the hotel industry which at least provides living wage union jobs.

Who was not there were most of the actual property owner neighborhood residents who oppose the draft ordinance. I presume because most of them were out working to pay for their homes and couldn’t take time off to attend a weekday City Council hearing. Of the small group that did attend, their theme was to ask why LA City wants to allow 180 days/yr. of rentals when most rational cities cap the hosting number at either 60 or 90 days.

The Airbnb speakers, almost to a person, admitted that they are running full time Airbnb homes; they urged the Committee to eliminate all caps on the number of days per year that they can “host.” And yet, by the Planning Department’s own testimony, that group represents something like 8% or less of actual Airbnb hosts. A far cry from the public Airbnb persona of folks making some pin money by sharing a room and providing a “hosting experience” to travelers.

It seems to me there have always been three key elements to any meaningful short-term rental ordinance:

1) How many days per year a host may engage in short term rental of their property;

2) Robust reporting by both the host and Airbnb, which will enable publicly verifiable tracking and enforcement, and

3) Some type of mechanism to protect the rights of neighborhood residents to preserve the nature of their communities in the face of the inevitable changes that large numbers of Airbnb rentals will bring.

Perhaps unsurprisingly, none of my top three items were dealt with any substance. A distant fourth on my list, but evidently the one and only consideration by the City Council, of course, is to take the TOT money and run.

There were a couple of fun highlights I took away from the hearing. First, is the curious fact that Airbnb now seems to want full time hosting, and insists that 180 days aren’t enough. One of the Committee members, however, pointed out the fatal flaw in their argument -- Airbnb hosts can have their listing up for 365 days a year, as long as they don’t actually rent for more than 180 days. Considered against the fact that 180 days would cover some 92% of current Airbnb hosts, the “full time” argument seems pretty bogus.

Second, in listening to the comments of the PLUM Committee, I was surprised how little the members really know (or at least pretended to know) about the details of the draft Ordinance, the Airbnb contract with the City, and the contracting out of the registration/enforcement for the whole ball of wax.

My absolute favorite though, was Mitchell Englander whose comments by any normative standard were simply incomprehensible. If you don’t believe me, check out the video of the meeting -- the Committee comments are in the last 10 minutes or so.

So stay tuned. The show will be back this summer and we will see if anything actually changes from the draft Ordinance.