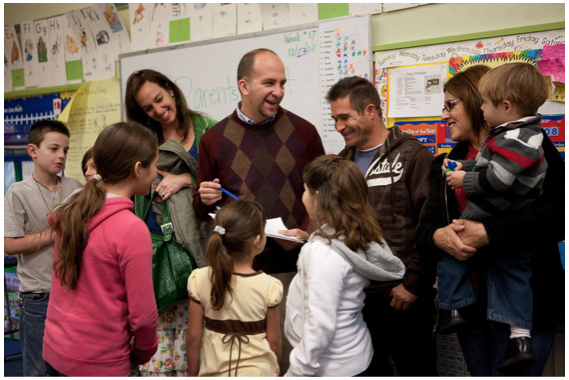 EDUCATION POLITICS--(Steve Zimmer, who is running for re-election for the Los Angeles Unified School District school board, wrote this unusual article, “The Case Against Myself.” The election is Tuesday. Decide for yourself whether he persuaded you.)

I want to present four legitimate arguments against me. These are good and fair reasons to vote against me on May 16th.

I know this is unusual, but because my opponent has lied so much about my record, I thought I would just go ahead and do this myself. I hope you will share this with your friends and family and explain to them that everything they are reading about me is a lie whether it is on the television, on the radio, or wrapped around their Sunday newspaper. Give them the real reasons to vote against me. Here they are:

This is what I have done. I understand some people can’t vote for someone who has done this.

But Nick Melvoin hasn’t used any of these reasons. Instead he has lied and he has distorted. I can’t stop someone from lying, but I can certainly tell you that this is not how you should win an election. Here are some of the lies he tells about me:

Nick’s Lie #1: The iPads were my program

The Actual Truth #1: The iPad program was started by Melvoin supporter John Deasy. I voted to end the program once it became clear that Deasy had lied to the school board and lied to the public.

The Actual Truth #2: The Board has balanced our budget every year. With the Governor’s latest announcement , we will have our budget balanced for 10 years straight.

The Actual Truth #3: We raised the rigor for all students by ensuring that all students be enrolled in college preparatory courses. While we increased rigor, we have raised graduation rates to record levels, from 56% to over 75%

Nick’s Lie #4: I laid off teachers

The Actual Truth #4: I anchored the difficult negotiations that allowed us to save our schools and save thousands of jobs

The Actual Truth #5: I stopped the cuts to arts education and have added over 18 million dollars to the arts budget each year.

I respect the democratic process and I value debate about the important issues facing our public schools. But that’s not what’s happened in this election. I am not perfect and I try to be a better board member every day. If Nick and the California Charter Schools Association waged an honest campaign, I would not be writing this argument against myself. It terrifies me that such an important election could be determined solely on lies and distortions. It should scare us all.

There is much more than even the control of our public schools that is on the line this Tuesday.

Our democratic values and the value of truth itself seem to have worked their way into this moment. I am proud to stand for honesty and service. I hope we can set a better example for our kids.

(Steve Zimmer represents District 4 — which stretches from the Westside to the West San Fernando Valley — on the LAUSD school board. Peter Dreier is professor of politics and chair of the Urban & Environmental Policy Department at Occidental College and an occasional contributor to CityWatch.)