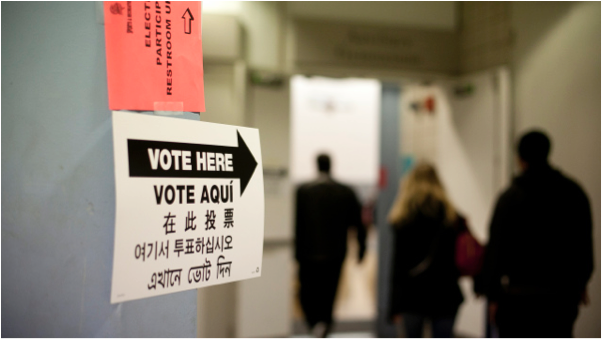 @THE GUSS REPORT-The election cycle ended for most people back on November 8 when the president and a full slate of national, state and local votes were cast.

In LA’s spring primary when other key races and issues were decided, turnout was, as California political strategist Michael Madrid pointed out in the LA Times, abysmal regardless: “People here seem more political than in the past — they go to a lot of protests and town halls, and they fill their social media accounts with anti-GOP screeds. But less than 12% of eligible voters showed up.”

On Tuesday, we reach the actual end of the voting cycle, which includes two LA City Council runoffs representing 13% of City Council’s voting power; Measure C, which addresses how LAPD officers may be disciplined (the LA Times’ Editorial Board opposes it); and two LA School Board seats.

Despite the likelihood of an even smaller sliver of voters showing up on Tuesday, at least one panicked person claiming to be a polling place volunteer says they will be woefully understaffed:

“I have [only one other volunteer] with me for this election, to cover four precinct table jobs, voter roster clerk, street index clerk, ballot clerk and voting machine clerk. [And we have] three precincts instead of the usual two….The city saves $100 per clerk and $40-50 on a polling place. This is abuse by the city of me and my poll worker by under-manning the precinct this way and will cause a delayed and poorly supported voting experience for LA voters.”

While we were not given time to confirm whether these claims are accurate, these are fair points if true. In 2014, LA City Council president Herb Wesson was so mortified by local turnout that he turned to cash prizes to boost the numbers and enhance the experience.

Still, LA School Report’s Mike Szymanski wrote last week to not worry, “…if history is any indicator, the poll workers … will have plenty of down time.”

(Daniel Guss, MBA, is a member of the Los Angeles Press Club, and has contributed to CityWatch, KFI AM-640, Huffington Post, Los Angeles Times, Los Angeles Daily News, Los Angeles Magazine, Movieline Magazine, Emmy Magazine, Los Angeles Business Journal and elsewhere. Follow him on Twitter @TheGussReport.  Verifiable tips and story ideas can be sent to him at TheGussReport@gmail.com. His opinions are his own and do not necessarily reflect the views of CityWatch.) Edited for CityWatch by Linda Abrams.